The Talon investigates the dangers of caffeine by forcing an addict to go cold turkey for a week.  CB social studies instructor Mr. Raymond Larry Reel ’90 starts his day with a cup of Nescafe Instant from his Hamilton Beech coffee maker at approximately 6:30 AM. As he prepares for the impending school day, he enjoys two […]

The Talon investigates the dangers of caffeine by forcing an addict to go cold turkey for a week. 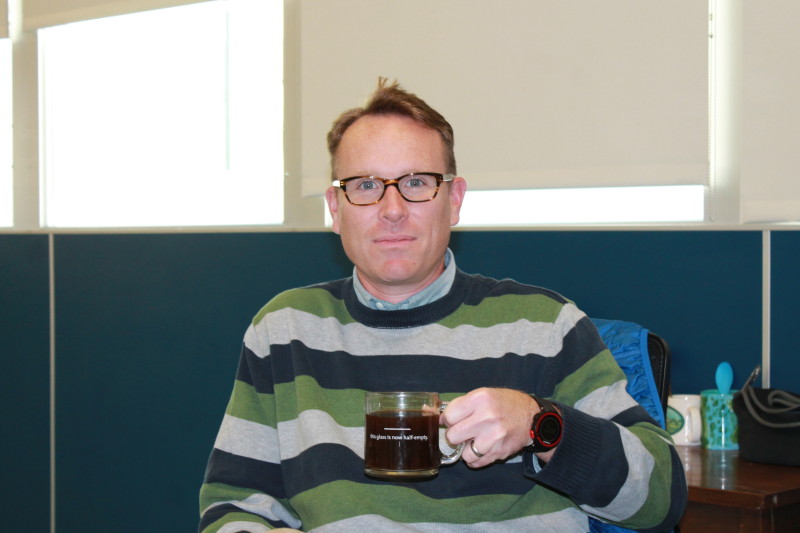 CB social studies instructor Mr. Raymond Larry Reel ’90 starts his day with a cup of Nescafe Instant from his Hamilton Beech coffee maker at approximately 6:30 AM. As he prepares for the impending school day, he enjoys two to three cups of his strictly black beverage, avoiding the “foofy” caffeinated drinks his students bring to his A set.

Immediately firing up the electric kettle he keeps on a spare table in his classroom, by the first bell, Mr. Reel exceeds the American average of 3.2 cups of coffee per day according to e-importz.com. When lunch rolls around, he trades his coffee for a Diet Coke before switching to back to coffee to give him the last bump he needs to power through the end of the day. He joins the 54% of Americans who drink a cup of Joe daily, describing his consumption as a “zen experience”.

A quick investigation to find the biggest coffee drinkers on campus led me to room 401, the home of Mr. Reel and his beloved electric kettle.

“I’m probably addicted to caffeine,” Mr. Reel says in an interview, citing that it is the most used and abused drug in the world, with close to 2.25 billion cups of coffee consumed every day.

I came with the challenge to go cold turkey for a week and to look closer at the affects caffeine withdrawal can have on the adult body.

Before he accepted my challenge, Mr. Reel explained to me how he started drinking coffee daily in larger quantities while at Christian Brothers as a student. Growing up, both of his parents were coffee drinkers. Most afternoons and weekends, Mr. Reel and his friends could be found at the Espresso Metro on Freeport Boulevard.

These days, Mr. Reel consumes and average of eight to ten cups a day, and “definitely a full pot on the weekends,” he says. He cannot even begin to imagine a life without caffeine, much less the experience of the atmosphere that accompanies a cup of coffee.

But after much deliberation, Mr. Reel says he will “take one for the team”, agreeing to deprive himself of all forms of caffeine for a week.

But what does caffeine really do to the adult human body? “

“If you occasionally enjoy it for the flavor or atmosphere, I wouldn’t say you are addicted to coffee,” CB’s residential drug counselor Ms. Emily McDougall says. “When you are addicted, your body starts to need the chemical effects caffeine provides to start the day without feeling physiological effects.”

“Caffeine at its core is a stimulant, and any stimulant is bad for you in large amounts,” Ms. McDougall says.

For some, caffeine can increase heart rate, which if increased artificially, can become dangerous; it is also known to cause insomnia, nervousness, and an upset stomach. In large amounts, it may cause headaches, anxiety and agitation. For those diagnosed with ADHD, the effects of caffeine actually mimic medications, essentially eliminating the potential energy effects of caffeine.

New research has led to the discovery of the health effects of coffee, supporting Mr. Reel’s opinion that coffee is healthy. It has been linked to lower rates of type-2 diabetes, a reduced risk for some cancers, improved memory, mood and energy levels, according to medicalnewstoday.com.

After securing Mr. Reel’s caffeine free pledge, I informed him the symptoms that often accompany caffeine withdrawal. The first noticeable sign are headaches, often described with the sensation starting behind the eyes and creeping up to the front of the head. Sleepiness, irritability, and lethargy follow within the next few days, completed with depression, lack of concentration, and muscle pain by the end of the week.

“I regretted this decision before I even said yes,” responded the new history teacher.

While Mr. Reel began his decaffeinated journey, I wanted to understand more about caffeine and teens. According to a survey conducted by a team of researches from the Food and Drug Administration, around 73% of American children consume some level of caffeine each day, and many CB students bringing beverages with them to A set.

“Caffeine is not safe for teens since your brains and bodies are still developing,” says Ms. McDougall.

A majority of teens find their caffeine fix through soft drinks and energy drinks filled with added sugars and artificial flavor. Though caffeine is not stored in the body, it is possible to feel its effects for up to six hours, leading to reduced deep sleep and delayed brain development.

Teen boys are shown to be more affected than girls, with their heart rate lowered by about three to eight beats per minute. To better understand how CB’s students measure up to national statistics, I asked a few students about their average caffeine consumption.

“I’m honestly addicted to coffee, I love it,” says Mackenzie Brown (’17) while cradling a mug filled with the warm drink in her hands. Many CB students show up to their A sets with the beverage, especially with the recent temperature drop. But not all students rely on coffee to start their day.

“I only drink coffee for the taste,” says Julia Ha (’17), who rarely drinks coffee and prefers tea.

Mr. Reel arrived to the Talon newsroom on the first Monday of the challenge, ginger ale in hand, blinking rapidly. Since beginning his fast the previous morning, he had developed the typical symptoms.

“I’ve been less focused and really sleepy, almost like I’m in a cloud,” he said hesitantly.

Additionally, his shoulders ached, and he was noticeably less bubbly, walking slowly, and responding to questions after long pauses. He took to replacing his daily fix with ginger ale, mint tea and water.

“My wife looked at me like I was dumb when I told her,” Mr. Reel recounts, as she has been without caffeine for around two years. He then trudged off, mumbling something about food.

Caffeine addiction isn’t only worrisome because of the effects of the drug — it goes hand in hand with America’s rampant sugar problem. On average, Americans consume 765 grams of sugar every five days, the equivalent of 17 cans of soda, compared to the 45 grams in 1822. Energy drinks contain 21 to 34 grams of the stuff per eight ounces, often coming in forms of sucrose, glucose, or high fructose corn syrup, reports the Alabama Department of Public Health.

A study by the World Health Organization revealed that users who consume two to three energy drinks could be taking in four to six times the maximum recommended daily intake, putting teens especially at risk for obesity and dental problems.

Energy drinks such as Red Bull market themselves with results such as increased energy, alertness and performance. The primary ingredients in energy drinks are sugar and caffeine, which can actually provide a temporary energy boost. But are the risks of energy drinks worth the potential consequences?

Overall, energy drinks are okay in moderation, with an occasional drink. But, surveys from organizations such as the WHO are coming out with reports of teens who are consuming three or four energy drinks a day, leading to dangerous side effects. The excessive sugar and calories in the drinks may contribute to weight gain and tooth decay, along with the potential of toxic overdose.

It is recommended for teens to have no more than 100 mg of caffeine daily to ensure that caffeine dependence is avoided. Though no caffeinated drink is truly safe, I decided to compare several popular drinks side to side. 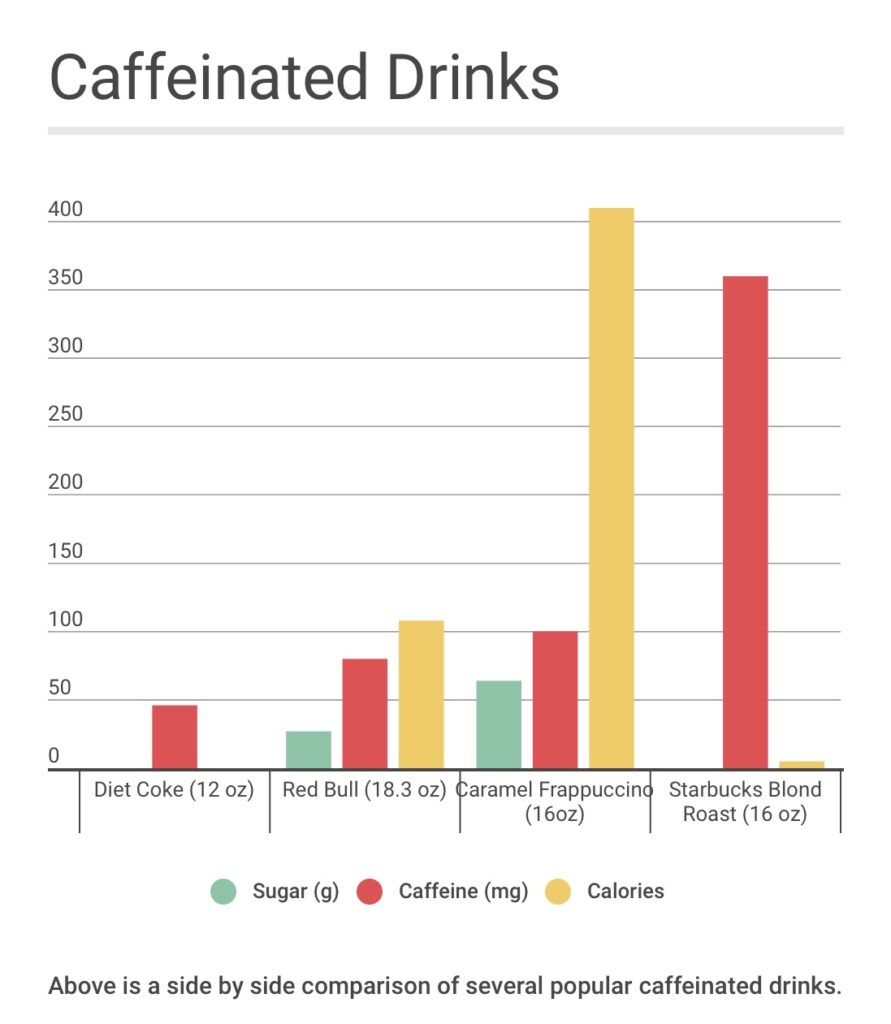 As proven above, the most efficient way to consume the most caffeine with the least consequences is through a cup of plain coffee, and for teens, coffee may be the safest option of all. But coffee should never be a primary beverage in a teen’s life. Teens are still growing, and through nutritious beverages such as juice or milk, essential vitamins and minerals are absorbed. Small amounts of caffeine is the safest route to go, aiding in a sharpened mental focus.

By Friday, the monster I had created appeared. Taking a moment to look up from my research, I was confronted with a flustered Mr. Reel, glaring at me through the windows of the Talon Newsroom as he slowly rose up to his full height.

He wore neon sunglasses and a frown, holding up an incriminating can of sugar free ginger ale. With slow, deliberate movements, he crushed the can, one finger at a time. Sinking back into the shrubs, he disappeared with his caffeine free beverage.

I tracked down Mr. Reel the next Monday morning, presenting coffee as a peace offering to add to his stash.

“Looking back, Tuesday was the worst day physically,” he said.

Throughout the week, he experienced temperature fluctuations and frequent joint pain. With emotional mood swings as his new best friend, he started to easily tear up over simple matters.

“I can’t tell you how wonderful it is to have caffeine back,” he said with a relieved smile. Though he still agrees that caffeine is unhealthy, especially with his newest adventure under his belt, he doesn’t plan to stop drinking coffee any time soon. But he does realize how dangerous it could be for teens to consume too much.

“If this is just what it does to an adult body, I can’t imagine what it could do to one of my students,” he says worriedly.

Next time you find yourself at Starbucks searching for a caffeine fix, consider just taking a photo of your whipped sugar provided by a Frappuccino rather than drinking it, because in the long run, the horrific side effects really aren’t worth it.