All Eyes On Ian

He may not stick out above the jumble of heads in a busy crowd, but you can be assured that Ian Ferrell’s potential for using his talents to stand out above the rest is as a high as anyone. Standing at 4′ 10″ and distinguished by his recognizable towhead hair and iconic Clark Kent style […]

He may not stick out above the jumble of heads in a busy crowd, but you can be assured that Ian Ferrell’s potential for using his talents to stand out above the rest is as a high as anyone. 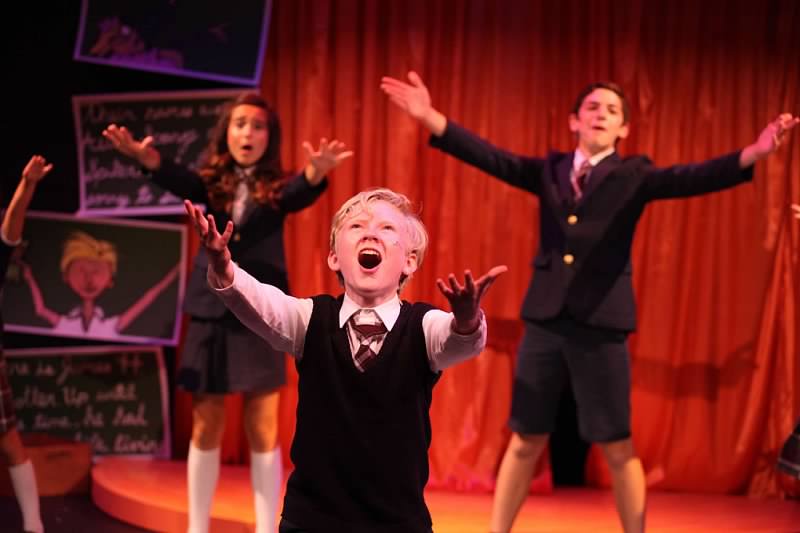 Standing at 4′ 10″ and distinguished by his recognizable towhead hair and iconic Clark Kent style glasses, he can be seen maneuvering the crowded halls of CB with the confidence and ease of a seasoned actor who smoothly escapes a villainous character onstage.

With these distinctive features complemented by a hearty grin that reflects his warm disposition, this young man has the powerful potential to go big places in his future.

In his third year as a student at Christian Brothers, Ian has acquired an accomplished reputation and striking popularity as an actor, Open Mic performer, KBFT anchor, and skilled dancer who has showcased his incredible moves at school rallies in the past.

So what is it about this young man that makes him exceptional?

Chris Tak (’17) has built a strong friendship with Ian over the past three years and recognizes the diverse talents that his friend possesses.

“First off, his fashion sense is just really great— dude knows how to dance,” Chris describes simply, yet perfectly.

Ian has made use of his prodigious dancing skills to not only turn up at Homecoming, but also enhance his acting movements onstage.

Ian’s theatrical talent has always been present, but he first began to really utilize his seemingly innate ability when he began high school as a freshman.

Ian’s debut performance in the fall of 2013 gave him confidence in his acting abilities, and since his first play he has continued to hone his skills with each subsequent performance.

“My first show was A Midsummer Night’s Dream and I played Bottom, and after that play I got really interested in theater,” he recalls.

The young theatrical star also performs outside of school-related performances and benefits from the experience of having multiple opportunities to further improve his acting ability.

“I work with Flying Monkey Productions, or FMP, and they do about four or five musicals every year,” explains the junior.

FMP also features two teen shows and two kids shows each year, and due to his versatile size, Ian benefits from the unique opportunity to participate in both kid and teen play productions.

“Because of my height and my size, I’m able to participate in the kids shows and sometimes in the teen shows too,” describes the actor with a grin. “It just adds a lot more time to my schedule and it’s very busy, but I find it very enjoyable.”

Mr. Michael Jackson, the Director of Drama Arts at CB, also recognizes the zeal for acting and talent of his young pupil.

“What’s great about working with [Ian] is that he comes to our rehearsals completely prepared and he throws all of his energy into it,” says Mr. Jackson. “He’s wiling to try anything and jump into any crazy situation and just do it 100%.”

In addition to acting, Ian has also been involved at CB the past few years by participating in Open Mic Night both on and offstage. He has both performed on a few occasions and handled duties of assisting the Open Mic team with management of the show’s production on others.

“What I get from working at Open Mic is the team aspect of working and putting something fun together,” Ian says.

Deciding to dedicate time to the field of theatrical production can be a rewarding experience, but it can also time-related drawbacks. Devoted actors like Ian must learn to manage their time in order to keep up with schoolwork and become familiar with their roles at the same time.

“You have to learn to cut off any extra stuff like TV and just try and get work done whenever you can,” the busy student admits. “When you’re not working, you’re reviewing and memorizing lines or practicing songs and what not. I just try to get the work done as fast as I can.”

With CB’s fall play The Tempest rapidly approaching, Ian took the time to voice his excitement for the upcoming performance, which takes an original approach in combining classical Shakespeare with the fantastical world of Star Wars.

The show will be the fifth for Ian at CB, who in his role as Ariel is enjoying the way that The Tempest has integrated science fiction into the play in a new and fun way.

“I think with Star Wars elements like light sabers and Tatooine, it will get a lot of CB people pumped up for a show like they haven’t been before,” the junior says. “It will also make people really excited about Shakespeare, which is also really cool.”

Ian Ferrell is one of many very talented and unique individuals in the CB community. These people may blend into the crowd in the busy life of school, but we have only to look around us to recognize their amazing talents and to appreciate how they are using these great abilities.