How well do we know Mr. Barsanti aka the man walking around campus with the rainbow polka dot pants? 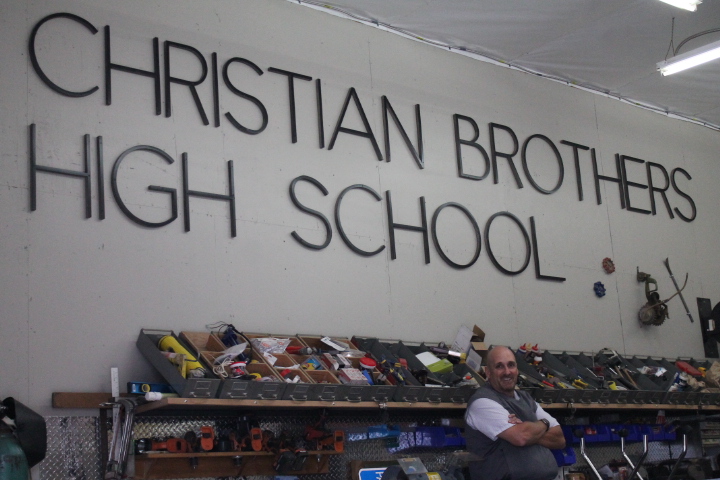 All of us at CB know Head of Facilities Mr. Steve Barsanti — if you don’t know Mr. Barsanti, think “crazy pants.”

As I walked into the facilities office to see Mr. Barsanti, the sound of Cheap Trick on the radio dominated the room.  OK, Barsanti is one of the coolest cats on campus.

Mr. Barsanti has had an astounding career, which started over 30 years ago as a college teacher.

“Before I came here, I taught 18 years at Jesuit: economics, Social Science and, Math,” he shared. “Then I came here to be the dean.”

“I was dean for eight years [at CB] and I taught six of those eight years. Then I was principal for summer school for I wanna say, four years.”

The transition from Jesuit to CB was immediately different.

“I liked the co-ed classes,” he says. “I had taught co-ed in college so it was good to come back to that.”

The teaching offer did not come right away for Mr. Barsanti so he was eager to accept the opportunity when he finally was asked by the administration.

That’s when his voyage at Christian Brothers was underway. As a teacher and the new dean. When asked to rate on a scale of 1-10, how much he enjoyed the job as dean he let out a husky laugh.

As Dean, Mr. Barsanti, was able to flaunt his serious side. He would probably be found during this time with a standard tie, shirt, and slacks. But standard clothing is not the real way of Mr. Barsanti though.

The walking tropical colors of Mr. Barsanti’s shirts, pants, hats, and shoes can snap a neck with second glances. He is the Willy Wonka of Christian Brothers making sure the chocolate factory is running smooth and that everyone can share in the royalties.

He has the most ingenious wardrobe one will ever encounter.

“My personality is closer to what you see on Fridays [when I wear colorful pants] than what you would see when I was the Dean of students.”

Now he is underway on a new expedition that changed his job title from teacher to Director of Facilities. The job is a specialty in resource management.

“All of us in facilities, our job is to help create a productive environment.”

If you’ve never taken a trip down to the maintenance facilities remember to add that to your lengthy CB bucket list.

Down there by the parking lot there is a sand colored warehouse that doubles as an oasis for our maintenance workers. The facility includes a break room fit with a titanium steel refrigerator, a 40-inch flat screen TV, a locker room, and an underground storage. There are a wide array of sockets, wrenches, drills, cables, and wires set out on long table. The table extends far to support this banquet of gadgets.

The tools that have been retired from use hang proudly on the walls as there time is done. The objective of the maintenance staff is to add things of value to the school. According to Mr. Barsanti, the goal is to fix all the “big, little things”.

Those big, little things add up quickly and that’s where their job is important.

How Mr. Barsanti got the job he has now is strange. Mr. Barsanti is in the midst of one job after 30 years of teaching experience now behind him. But wait, because the best of Barsanti is still ahead