You are here: Home \ Community \ Featured Posts \ The Evolution Of The Application
Community
0

The Evolution Of The Application

CB students have a strong tradition of having the option to attend a UC if they so decide. But with the coming changes to the school system, admission into and attendance of these campuses may become increasingly difficult. Recent propositions by University of California system leaders indicate that there could be significant changes coming to […]

CB students have a strong tradition of having the option to attend a UC if they so decide. But with the coming changes to the school system, admission into and attendance of these campuses may become increasingly difficult. 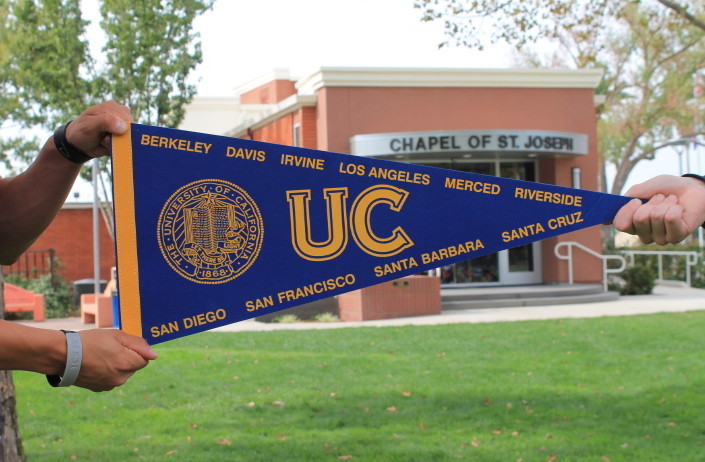 Recent propositions by University of California system leaders indicate that there could be significant changes coming to the UC schools across the state, including gradual implementation of tuition increases through 2019-2020.

Every year, Christian Brothers students apply to and are accepted into one of more of the nine UC schools in the state.

“The UC system guarantees that the top 9% of all California high school students will get admitted into at least one UC,” she says. “But I think people are freaked out about all these changes because statistically you see more and more international and out-of-state students come that are paying full tuition.”

The UC system continues to heighten its admission standards and increase the prices of tuition as well, with a projected 5% increase in rates each year for the next five years.

“[The admission process] is definitely becoming more competitive, and starting this year, some UC’s like Berkeley will start asking for letters of recommendation for some kids, which the UC’s have never done before, ” Ms. McClellan says.

The process of actually applying to schools in itself has also undergone huge changes since the onset of the 21st century with the transition of applying with pen and paper to online.

High school seniors have a much easier task of selecting their school when submitting applications than graduating senior students had in the past.

“We had to hand fill out every single application on paper or put it in a typewriter and type it out,” explains Ms. McClellan in recounting how far the process has evolved.

Given the fast developing nature of technology in the modern world, people today would see such methods as essentially primitive. The use of electronic devices and computers makes applying online radically simpler and quicker than before.

“The ease with technology has definitely improved the process and now it’s a simple click of a button online,” describes the counselor. “Kids are applying to a lot more schools than what was the norm when I was going to school.”

Ms. Mary Bowers, another invaluable source in helping college bound seniors, agrees that there was nowhere near the pressure or the level of stress when she was applying to colleges.

The sophomore literature teacher doubles as a college essay specialist in a tutoring center and helps countless seniors improve their application papers every year.

“The process was so much simpler, and there wasn’t this intense sense of panic that sometimes comes with applying to college,” she says.

Not only have application methods developed and tuition rates skyrocketed over the last 20 years, college applicant pools, in particular the UC’s, have also increased annually due to rising numbers of high aspiring students.

“Last year, UCLA got almost 100,000 applications for an incoming freshman class size of about 5,000, so it’s for sure becoming more competitive,” attests Ms. McClellan, who saw three of last year’s Class of 2015 seniors make that list of 5,000 students and enroll at UCLA this fall.

The counselor also estimates that “anywhere between 10 and 30 students from CB attend a UC school depending on the year,” an impressive average considering the heightening difficulties of entrance combined with rising prices.

Further advancements in the general process of college application since the latter part of the 20th century include the introduction of the PSAT for high school juniors and various preparatory classes to help students be ready for test day.

“When we took tests like the SAT and the ACT, there was no PSAT before them, and nobody took practice classes or took any sort of prep,” says Ms. McClellan. “There was also not as much stress surrounding the importance of all the college admission tests.”

Ms. Bowers gives a final word of advice to students in the hope that they will not procrastinate and stay on top of their college planning.

“Students often put off looking at colleges until it’s a little too late, and I really think that it’s something they should start exploring halfway through high school,” she recommends.

With continual changes being made to college admissions and the application process, schools are becoming harder to get into. But with the strong education and supporting presence of many counselors, CB students can be assured of their ability to successfully apply and receive admission into various schools.