Mr. Dave Levasseur and Mr. Vince Leporini share their weird beard stories and their inspiration for their furry faces. 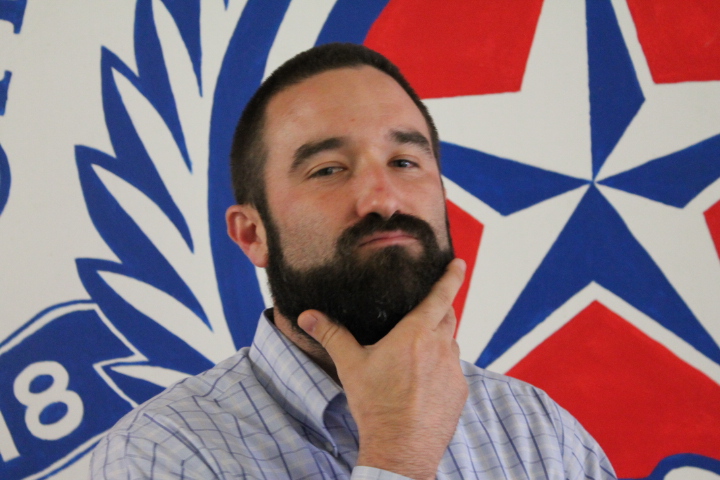 Mr. Dave Levasseur and Mr. Vince Leporini grow out their beards for different and casual reasons. But does CB beard dress code  apply to staff too? Does Mr. Leporini think his beard is the almighty? Is Mr. Levasseur a wannabe baseball player?

In high school Mr. Levasseur crafted a mullet and a groovin’ mustache to be unique. He first started growing facial hair because he was trying to be a wannabe baseball player. He recently claims that is his inspiration to be like Bryce Harper.

“Initially, I think it was because of some of the baseball players that I followed had them,” he says as he stroked his beard. “Which is not always a good idea because it caused me to have a mullet.”

He claimed it was a cool “business in the front and party in the back” mullet, but I think most can agree that with the combination of the mustache, it was a thumbs down.

Mr. Leporini grows his beard out of pure laziness. Like many of our older men at Christian Brothers would like to be, he doesn’t want to have to deal with it.

“The whole point of having a beard is to not do more things in the morning,” he says.

The laziness is taken to a whole new level with Leporini’s full beard covering his whole face.

“It is mostly out of necessity for an all natural face sweater,” he claims.

Both men say it takes them about three weeks to get full coverage of the face. Both teachers craft their beards with tools such as razors, beard trimmers, beard oil, and a mustache comb. But they both rock the full beard, with some design to keep the cheek bones bare to make their faces look slimmer.

Lep and Lev agree on keeping the beard to look older. For the many years they have worked at CB, both keep the beards to look like staff members..

“Mostly I want to go to back to school night and not be confused for a student ambassador,” Lep says.

The bearded teachers use the beard to mask their young faces and lively personalities for ones of a wise and older professor.

“When I have it off I seriously look like a seventh grader,” added Mr. Levasseur.

The science instructor and former co-Dean of Students says that the reason we have dress code for men at CB is so they are ready for the professional world, with clean cut faces and looks. CB likes to keep their boys groomed with wonderful hygiene.

“We are preparing Christian brothers men to be New York Yankees,” he claimed.

If you are looking for some weird beards to check out go to beard.org for some cool inspiration or go see Mr. Leporini and Mr. Levasseur.