You are here: Home \ Community \ Featured Posts \ Is Scholars The Way To Go?
Community
0

Is Scholars The Way To Go?

Think you have what it takes to become an AP student? You may get more than you’ve bargained for. 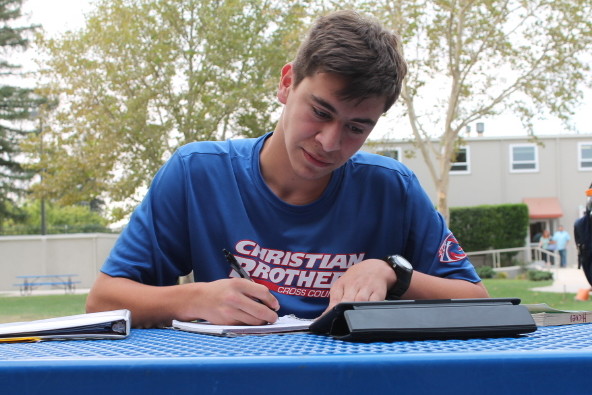 In the solid words of College Counselor Ms. Melissa McClellan accelerated students “yearn for the faster pace.” But do they have the blinders on?

My impression is that they wouldn’t stop to smell the roses unless they got a grade for it. Though the comparisons between human beings are often harmful and redundant, colleges survive on comparisons. So let’s imagine for a moment a nightmare world for scholars, a world where college doesn’t exist.

What would be the verdict on kids that take AP classes then? It would be just a merit badge of an already rigorous school.

The students in these classes work dog hard, all while other students find it torturing to turn in their homework on time. People at the end do what they think will make them happy.

Isn’t it hard being a student? A student with AP classes, that’s a different story. The methods of intense learning are hardly questioned because many people respect students taking academics to the next level.

Talking to Ms. McClellan, I found that CB stands above the crowd in terms of AP classes. It may be a popular thought that these excellent students are harder to teach but she says that “it’s almost easier to teach these students,” because they are self sufficient workers.

She went on to say that “all teachers are capable of teaching scholar students.”
True, the echelon of teachers here at CB is superb and can teach at any level. But can any student learn at any level?

I asked the science master, Mrs. Nicole Brousseau, that same question. She teaches, among other courses, freshman students in accelerated biology.

“We’re not all in little boxes, right? We all came out of the box the same way, yes, but not to say that one box is different from any other box,” she says.

The same thing goes for students. To Mrs. Brousseau, there’s little difference between one of her accelerated students and a college prep student.

There are the calculated ones who would rather delay their satisfaction. Then there are the hedonists. Who is the happier student? We may never know.

The always insightful,Mary Hynes (16) sees through to the level of what’s
true and what’s not so pretty.

“I think there is an entitled attitude in AP classrooms,” she says. “The students may
think they are smarter, but honestly, I know people in CP that are just as smart, if not smarter.”

So think long and hard before signing up for that attractive AP class. Think about the things that could be missed among the long nights reading out of books with text the size of a grain of rice. Some students can manage just fine though as long as they find the right things to take the edge off.

“Can someone get me my iPad so I can play Sudoku?”

It’s important to understand that learning goes on all around us. The different speeds of education mean that we are unfairly coddled to familiarity only with the students that learn at the same speed. This isn’t a concern unless we don’t take our own education seriously.