You are here: Home \ Community \ Featured Posts \ Get Ahead With Biomed
Community
0

Get Ahead With Biomed

First the iPad program, then the engineering program — now CB hopes to take yet another great leap into the 21st century with the introduction of biomedical studies. There is excitement in the air of the STEM department as CB hopes to open up its new four year biomedical program soon. The project-based science courses […]

First the iPad program, then the engineering program — now CB hopes to take yet another great leap into the 21st century with the introduction of biomedical studies. 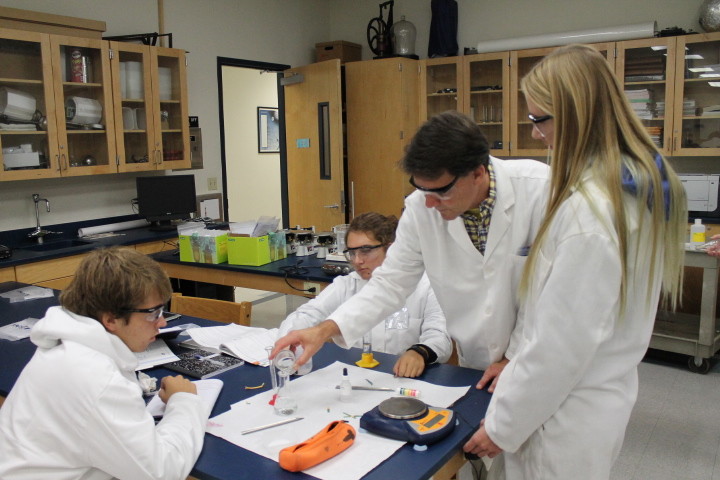 There is excitement in the air of the STEM department as CB hopes to open up its new four year biomedical program soon. The project-based science courses that will potentially be offered will focus on biomedical applications and the integration of science into the biomedical field.

The biomed program would come to CB from Project Lead The Way, the same company that gave the school its current engineering program.

There are four courses that will potentially be offered in total, one for each year. The first will be Principles of Biomedical Sciences, then Human Body Systems, Medical Interventions, and finally a Capstone course called Biomedical Innovations.

Ms. Nicole Brousseau explained how the program is trying to give students experience and an introduction to biomedical sciences.

“We’re super excited about putting this together,” exclaims the biology teacher. “Ultimately the big picture of this [program] would be to give students who are interested in the biomedical field some experience with that and an introduction to it so that if they’re thinking about that path in their life they would then have some introduction and maybe it’ll inspire them even more to continue in that field.”

Ms. Brousseau expresses that the classes would give students another road to take on their vocational journey.

“It is a good way to enhance the science we already have,” she says. “The program gives the students who are interested in science another avenue, another class, another option to take.”

The Talon also spoke with STEM director Mr. Danny Delgado ’79 who summarized the potential benefits of the new program.

Mr. Delgado brings up the great point that technology is taking over every industry and form of work as our world becomes more progressive.

The biomed program would be able to introduce students to the medical field while also introducing a technology aspect to science like we’ve never seen it before.

Mr. Delgado also made the very exciting announcement that an environmental engineering program will also be potentially be introduced to CB some time in the future.

“Things like [technology] aren’t going to change, so why not put our students in the position of being front runners, instead of them having to play catch up?” he says.

Mr. Delgado has some advice for young scientists interested in becoming apart of this program.

He also adds a short and sweet snippet of advice:

“Take risks, be willing to fail.”

The biomedical program will surely bring new ideas and inspirations to those who are apart of it and hopefully will give CB students the edge when it comes to getting ahead in life.