Filling In The Shoes Of Assistant Principal

CB Alum Mr. Dave Desmond is back with more responsibility than ever with his new role of assistant principal. Mr. Dave Desmond ’94 came back to CB last year with more authority than he did when he flew from the nest in 1994. He returned as a teacher after leaving his job at De La […]

CB Alum Mr. Dave Desmond is back with more responsibility than ever with his new role of assistant principal. 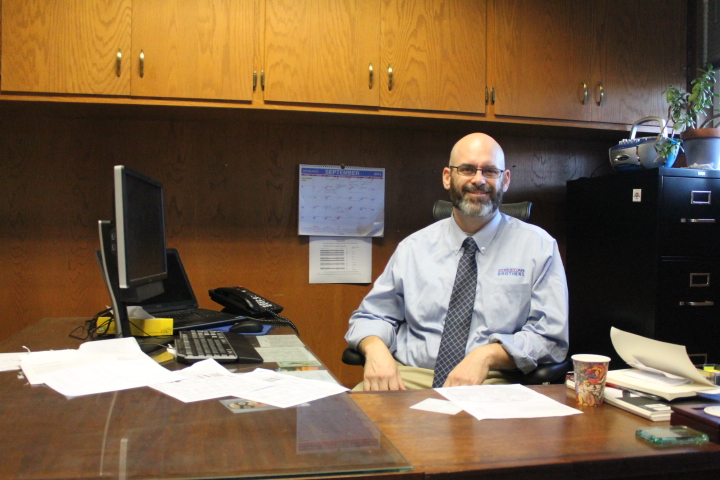 Mr. Dave Desmond ’94 came back to CB last year with more authority than he did when he flew from the nest in 1994. He returned as a teacher after leaving his job at De La Salle High School in Pasadena, but he opens this school year with the role of being assistant principal.

With a new position comes new responsibilities. When asked about what new duties he is responsible for this year, he summarized it with one word: “scheduling”.

The former Falcon is now in charge of building the master schedule. He takes care of coordinating student’s schedules with teacher’s schedules and figuring out which classrooms are available and when.

Not only is Mr. Desmond responsible for making every student and teacher’s day flow efficiently, but he also oversees the PE and Math departments, as well as teaches two history classes.

Desmond has previously worked with Powerschool, overseeing teachers, developing the curriculum, and so forth.

“My experiences have been here and there,” he explained when asked about familiarity with this role.

At DLS, he was a department chair for a number of years, which was the most experience he’s had with overseeing a group of people. He was also an academic advisor, so he’s had prior exposure to scheduling.

Mr. Desmond revealed that his new job is tough, but he has been receiving a lot of support from everybody up in the front office. He also added that he enjoys his new job because it allows him to interact more with a wider group of teachers.

“It’s been really cool to get to know the teachers in a way that I otherwise would’ve not known them,” he says.

Likewise, the new assistant principal is looking forward to “meeting a lot of students whom I never would’ve met.”

All the teachers have been lending him a hand, especially Mr. Rolf Schumann, the former assistant principal who is now working as an assistant athletic director.

“He’s been continuously helping me out,” Mr. Desmond comments on Mr. Schumann’s aid since the new shift.

Mr. Schumann helped the rookie out this summer by sketching the master schedule.

“I really wanted to make sure that he started on a solid footing,” the previous administrator stated.

He also made appearances to Desmond’s office throughout June and July to check on his progress as schedule changes were rolling in.

Mr. Schumann reminded him to “make sure to take time for your family”, as this is a time-consuming job, especially during the summer.

“If he trusts his gut and he knows deep down that he’s doing the best job he can, he’ll be fine.”

It’s a rigorous job, but Mr. Desmond is prepared to take on the challenge.