A  few CB alumni turned teachers reminisce about their times as a Falcon.  The end of the school year has been quietly lurking for CB students, ready to pounce and take us by surprise.  I don’t want to speak on behalf on the school– but I have reason to believe that the Christian Brothers community is […]

A  few CB alumni turned teachers reminisce about their times as a Falcon. 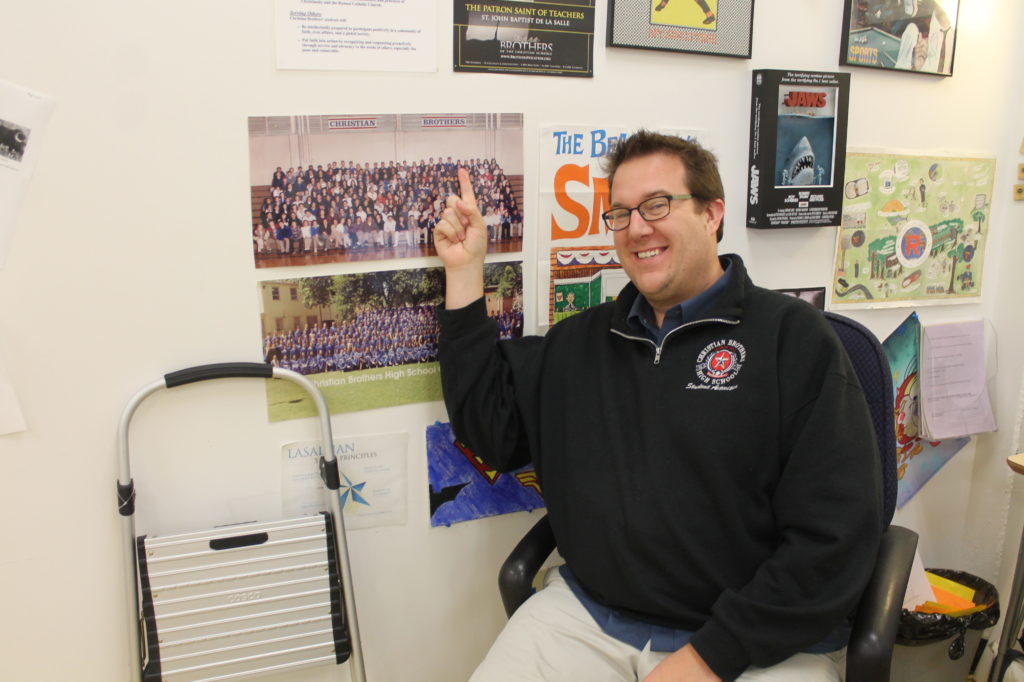 The end of the school year has been quietly lurking for CB students, ready to pounce and take us by surprise.  I don’t want to speak on behalf on the school– but I have reason to believe that the Christian Brothers community is excited to welcome the reprieve of summer.

Students have been rigorously working their [tails] off cramming for exams and hurriedly trying to finish last minute math homework before the class bell tolls.

The stresses of midterms, learning another language, AP exams and much more weighs a lot on the average mind, especially at a high school that ranks as one of the hardest in the country.

However, everything changes in the final month leading up to summer vacation.

The air always seems a little fresher and everyone a bit more cheerful– it’s a wonderful time to be alive. *nostalgic sigh*.

This time of the year is especially special for one class in particular– the seniors.

Oh the dreaded, and at the same time respected, seniors. Whether you love them or hate them one thing’s for certain– they have been through a lot. No not like One Tree Hill or something like that.

Let’s break this down from a fundamental standpoint.

If you’ve been at Christian Brothers for four years you will have eight rounds of finals, four Holy Bowls, 720 days of school, one handsome president, and have said “That we are in the holy presence of God” about 2,500+ times.

So you could at least say the seniors are the most experienced.

These soon-to-be Christian Brothers alum are not the only ones on campus who have been through senior year at CB.

If you can imagine it, there are several teachers on campus who used to roam the same halls you do today–of course back in different eras that we cannot totally comprehend.

He was quite the slick fellow back then and he reminisced to the Talon on some of his most vivid memories of senior year.

“We used to have this thing called a night rally where you came back to school at night and that was a blast,” says Hogan. “As far as graduation, I remember grad practice with Mr. Kirrene and Mr. English and that tough and boring.”

Get ready seniors grad practice is coming for you, dun-dun-dun.

“I remember the last day of  school and people just went crazy and ran around screaming and hollering,” he laughs.

Why should you expect anything less from kids that waited for long years for that one moment? It’s truly something to soak in.

Popular literature teacher Mr. Tony Caselli (‘97) who was from the class of ‘97 spoke about some of his best memories from his senior year.

“For me my best [memory] was that we were the class with the destructive senior prank,” says Caselli.

I shouldn’t be the one telling you this, but if you don’t know the story of the senior prank of 1997, well lets just say its one for the record books and there may or may not have been a live cow involved as one of the many elaborate pranks.

“The day after that was my most vivid memory because we came in and Mr. Kirrene, Mr. English, and the two senior moderators got really really mad at us,”says Mr. Caselli. “It wasn’t pleasant.”

He also recalls one of his most cherished memories of the senior year class the Mystery of Suffering and Death.

“Another thing I remember a lot is Zanetti’s class second semester senior year because my best buddy on campus he and I had met first semester freshman year in religion class and we didn’t have another class together until second semester of senior year,” Mr. Caselli remembers.

“We just had a lot of fun in that class just messing with people,” he says.

“Zanetti says I’m the only student he’s ever thrown out of his room in his entire teaching career,” revealed the lit teacher.

Another member of the literature department, Mr. Dave Anderson (‘07), who enjoys the little things in life, also gladly shared his some of his favorite recollections as a CB senior back in 2007.

“There’s just many memories of senior year,” says Mr. Anderson nostalgically. “Honestly when I think about it it’s a lot of the little things, as cliche as that is, like having lunch with my friends and having a very relaxed schedule compared to previous years.”

The former CB students also thought back to what the last month of school felt like as a graduating senior.

“The last month feels like you have so much free time and your schedule lightens up,” says Mr. Hogan. “You have a lot of down time. Plus if you’re driving, which I was, you could pretty much go wherever you want.”

“I just remember that freedom,” he adds. 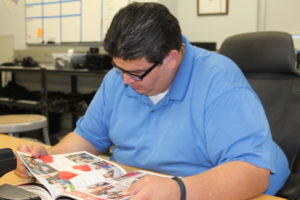 Mr. Hogan relives old memories as he skims through his senior yearbook.

Mr. Caselli also agreed that the last month of senior year was a time to remember.

“I just remember a lot of stuff to be excited about,” he says. “I was in the play which I had never done anything like that before and that was a cool experience for me.”

Believe it or not Mr. Caselli was also pretty smooth with the ladies his senior year as he reminisced on his former senior girlfriend.

“I went to two proms,” he slyly says. “I went to CB’s prom and St. Francis’ prom because my girlfriend then went there and that was fun because I didn’t go to a lot of dances before that.”

“I guess I also felt very adult with my job and graduating,” Mr.Caselli adds.

Mr. Anderson was also quite fond of the last month of senior year leading up to a magical night called graduation.

“Our class was pretty close and in that last month especially we all kind of savored being in each other’s presence and enjoyed each other’s company,” the CB alum says.

“There wasn’t any judgment or drama,” he says. “All of us were enjoying our final weeks at CB together.”

These alumni of Christian Brothers High School walked the same halls, experienced the same memories of senior year, and journeyed to college just like the current seniors are in the process of right now. They thought it would be fair to share some pieces of advice for the senior class.

“It’s hard to imagine it, but you have this kind of social circle of people that you’ve been with for four years almost everyday except for breaks,” Mr. Hogan recalls.

“That connection is gone forever. In college, you might branch out and meet a lot more people, but you won’t have this kind of repetitive social circle of people the way you have in high school and that’s what kind of makes it a special and unique experience.”

“I would just say treasure that. And if there was someone you wanted to talk to or something you needed to get off your chest you should hurry up and do it cause it’s almost over,” says the KBFT instructor.

Mr. Anderson’s message consisted of enjoying the people and events CB has left to offer before high school comes to an end.

“There’s always a lot of stress and anxiety over college, but college comes soon, so just enjoy the last couple of weeks here,” he insists.

“Savor it and enjoy it– don’t be in such a rush,”says Mr. Anderson. “Hang out for longer after school, come to school earlier to hang out, take advantage of all the opportunities, go to Open Mic Night, go to the sporting events, and just go to everything.”

Mr. Caselli emphasized being in the moment and taking in what’s happening around you.

“I wish I was somebody at that point in life who journaled,” he says. “It would be cool to actually go back and read what I wrote about on graduation.”

“Try to be in the moment as much as possible,” he adds. “When you’re in the middle of everything, just stop and take it in and think ‘Wow this is my high school graduation, this is never going to happen again’.”

“Try to take a mental picture of that moment.”

In just a few short weeks, this roller coaster that we call high school will come to an end for the senior class. Soon most seniors will be going their separate ways, packing up the last 18 years of their lives as they get ready for college.

But it doesn’t all have to be sad, the seniors will be beginning a new chapter in their lives moving on to bigger and better things, so let’s make the time together we have left count.

As the great Ferris Bueller once said, “Life moves pretty fast. If you don’t stop and look around once in a while, you could miss it.”
Here’s to the class of 2015.