CB students share their own experiences in order to stop the hurtful use of the “r” word. March 4th is the national awareness day for those who suffer from mental disabilities and on this day, #spreadthewordtoendtheword was tweeted over 500,000 times and is still being used to shed some light on the topic of how […]

CB students share their own experiences in order to stop the hurtful use of the “r” word. 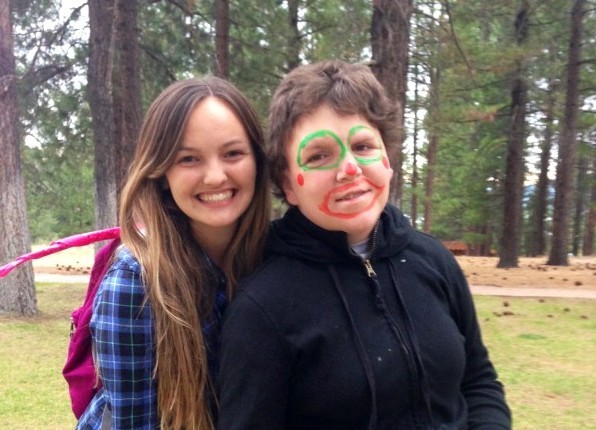 March 4th is the national awareness day for those who suffer from mental disabilities and on this day, #spreadthewordtoendtheword was tweeted over 500,000 times and is still being used to shed some light on the topic of how society misuses the r-word.

The website r-word.org created a pledge for individuals to sign as a way to inspire people to stop using the harmful word. But do people truly understand how shameful this word can be?

By definition, the r-word is a noun, representing people who are slow or limited in mental development. The word is commonly used and should be used for diagnoses or to describe one’s behavior. But today’s society has turned it into slang and often uses it in the wrong context.

The slang for the r-word is defined as anything stupid or foolish. For those suffering with physical and mental disabilities, hearing society use this word freely can be damaging and hurtful.

Christian Brothers seniors Tia Eliopoulos (’15), Caroline Stringer (’15), and Hannah Delaney (’15), all feel strongly and passionate that the r-word is misused.

“The r-word gets thrown around and used as a put down adjective but what people do not understand is that this is very offensive,” Tia stated. “This impacts people who have friends or family members with disabilities because it’s so offensive.”

“The r-word should not be a demeaning word. People in our generation have made a disability, that is a blessing, into an insult,” Carolina adds. “I hear the r-word everyday around me and all I can think is ‘all of these people around me have no idea what they are talking about.

Along with these ladies, I attended Camp ReCreation last summer, a week long summer camp for those individuals suffering from intellectual and developmental disabilities. It was an extremely rewarding experience for myself. When I was a counselor at camp, an open mind and positivity helped me make it through the week, especially since I had never worked with disabled people before.

My older brother Ethan Schanberger ’13 actually introduced me to Camp Rec and experienced it all himself.

His two years of experience at Camp Rec has led him to believe that the r-word is no longer an appropriate word to use freely.

“People preemptively dismiss those with disabilities with this word, and that is nothing but another form of hate,” Ethan shares.

“They have taught me new ways to communicate, kindness, and that there are always reasons to be happy even if life isn’t perfect,” Caroline recalled about her experiences working at Camp Rec.

Prior to camp, my fellow counselors and I had to take a pledge to never use that word, especially towards our friends with special needs.

Tia and Hannah also attended Camp Rec and left with a lifelong promise to never use the r-word again.

“At camp I made an oath to never say the r-word again and I am confident and proud to say that I never ever will,” Tia added.

Often, people don’t realize that what they’re saying can be damaging. It is one of those “think before you speak” situations that tends to target the community of special needs people in a demeaning way.

“This leads to the belief that people with disabilities are characterized only by their mental capabilities and that they are dumb,” Hannah proclaims. “Having a disability doesn’t make you stupid — these people have so many gifts to offer and should not be put into a category of ‘stupid'”.

People who have experience or live with those with mental disabilities have firsthand experienced what the characterization provided by the r-word can do.

“My sister has Down Syndrome, which mean’s she has a mental retardation, but she is one of the most intelligent people I know,” Caroline admires. “She is very smart, she likes to write, and tells the funniest jokes and most of the time has wittier things to say than I do.” 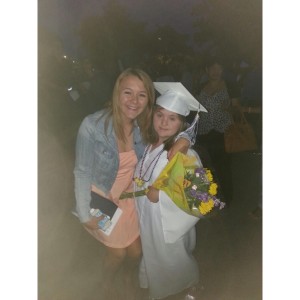 Caroline and her sister

Caroline shares that her sister is aware of what people say about those with special needs.

“My sister understands when people are being mean. She has heard someone say the r-word in a demeaning manner and asked me what they meant,” Caroline adds. “It’s very hard to tell your sister to ignore them because they are being mean or that people don’t know what they are talking about.”

When I was a counselor at camp, it was my first experience working with and living with those who have disabilities. This opened my eyes, along with others, to how amazing this community of people is.

Tia had a similar experience at Camp Rec.

“My campers name was Danielle and she was without a doubt one of the most amazing and sweetest person I’ve ever met,” Tia recalls. “After spending a week with her and becoming so close with her I could not stand people using the r-word in front of me because how dare they put down my friend Danielle or any of the other campers.”

Her time at camp has made her passionate about this topic and now she strongly advocates that something needs to change.

“I just think that it’s so disrespectful, yet people do not take a second to realize how much harm they have caused not only to me but also some of the best people I care about and love so very much,” Tia declares.

I first realized how many people were passionate about this when I scrolled through Twitter and saw that the hashtag #spreadthewordtoendtheword was currently trending, I then immediately felt the need to share my love for the special needs community.

Social media is a perfect venue to let your opinion and beliefs be heard, and this hashtag allows myself and others who are passionate about this topic to speak up.

“I think social media is a really good way to get word out about an issue because it can get spread so easily,” Tia acknowledges.

“I think this hashtag is important because it shows that there are people everywhere that understand that people are using this word incorrectly and disrespectfully. So I would encourage everyone to #SpreadTheWordToEndTheWord,” Caroline advises.

While the hashtag can be impactful, it is up to us and those passionate to spread the love and happiness that we share with those who have disabilities.

The r-word has become apart of many people’s daily vocabulary and way too often use it to replace words like stupid, illogical, or dumb.

My camper, Caraline, inspired me to take the pledge against the r-word and because of my love for her and other campers, I always try my best to correct those who I hear using this word just because I feel it’s my job to.

“I HATE when my friends use the r-word as a put down,” Tia shares. I always try to correct them.”

So, why don’t we all? It may just be a word, but it is one that all of us need to take out of our vocabulary. The impact the word has on many people is far more than we think.

The Talon encourage everyone to spread the word to end the word. It’s easy, really — just think before you speak and respect everyone around you, regardless of how often society uses this word.