You are here: Home \ Community \ Falcon Features \ Featured Posts \ Adventures With Paul: The Confessions Of A Host Student
Community
0

Adventures With Paul: The Confessions Of A Host Student

In the wake of the departure of twenty students from Avignon, France, the Talon’s Ally Boulas reflects on the lessons learned while living with a foreign teenager. April 17, 2015. For months, the date had been circled in red on my calendar, teasing me. My mom had been frantically cleaning the house, chasing my dogs […]

In the wake of the departure of twenty students from Avignon, France, the Talon’s Ally Boulas reflects on the lessons learned while living with a foreign teenager. 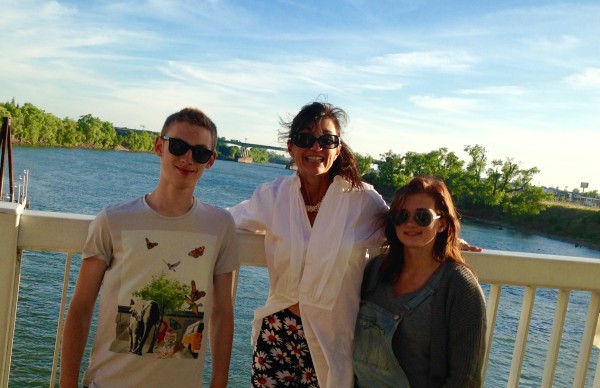 For months, the date had been circled in red on my calendar, teasing me. My mom had been frantically cleaning the house, chasing my dogs around with the vaccuum cleaner and shoving Clorox and Windex and every other “-ex” one could find in the cleaning section my way. Google Translate waited readily on my phone. I’d raided the foreign films section on Netflix and braved a world without the safety net of English subtitles.

Finally, the day came, and I — along with twenty other CB host students — huddled together in eager expectation in the CB parking lot at 2:30 in the morning, anxiously scanning the streets for the huge black bus that carried the students we’d be hosting for two weeks, a group of travel-weary teenagers from a town in the south of France called Avignon.

The trip was exhausting for them: flying from the airport in the seaside town of Marseille to London, missing their flight to America and having to wait in the cavernous Heathrow Airport for hours, finally catching a flight to Denver where they had yet another delay, before finally getting to San Francisco and boarding a bus that would take them the hour and a half journey to Christian Brothers High School.

The whole travel time took them about twenty five hours.

We were nervous, but so were our transatlantic friends. The only contact we’d had with each other was through choppy emails or the occasional Snapchat.

“It was a little scary,” admits Paul Brachet, the 16 year old French native currently sprawled out in my guest room. “But mostly, we were just tired.”

Our exchange group, lead by Ms. Patricia Gallagher and Mrs. Stefanie Howorun, had spent weeks in preparation, attending meetings during all school lunch, learning about the town of Avignon, and of course, filling out tons of paper work. There were personality profiles, permission slips, and a gargantuan packet that demanded every single detail about our households, from the square footage and amount of bathrooms to the amount of money each of our parents made.

But despite all of the hard work, time flew by, and the beginning of the trip was here in the blink of an eye. And the exchange taught me much more than just how to improve my French — it taught me how to improve the way I look at the world around me.

Here are some of the things I, along with my fellow host students– learned, and will definitely carry with us for the rest of our lives.

While trying to think about places to bring Paul, I had to think outside the usual — In N’ Out (which according to him, is “much better than McDonald’s”), Old Sacramento, the river, — and realized just how little I knew about the city that I’ve lived in for 13 years. Although Sacramento had been home to me for most of my life,  I hadn’t taken the time to actually make it my home.

I discovered the city as Paul did, grew to love the City of Trees through the eyes of a tourist.

Its easy to become disenchanted with your home town, to see it as nothing more than a tangle of freeways and dirty sidewalks. But there are treasures in Sacramento, more than I ever realized, and now I know I’m going to miss this place even more when the time comes for me to leave it.

Suddenly, Old Sac became more charming, the Farmer’s Market every Saturday more fun, the buildings more stately. All the time I’d spent wishing to get out of Sacramento I’d wasted by not appreciating it.

Although the age-old statement that English is one of the hardest languages to learn has been proven false — I asked Paul and he said he likes it better than Spanish — Americans are still incredibly lucky that English is our native tongue.

Practically anywhere we go in the world we can communicate, or at least have easy access to someone who can. If Paul couldn’t speak English, either as fluently as he can now or even at all, I’d be lost. Relying on my flimsy French would have gotten us barely anywhere.

One of the biggest worries I had while waiting for the exchange to start was about my sense of humor. Sarcastic at best, biting at worst, I rely on irony to make people laugh. But I also knew that sometimes, even native English speakers don’t find me funny, so what was the hope of ever cracking jokes with a sixteen-year-old French boy?

I was dead wrong.

If Claire Jones-Ruman (‘15) could describe her experience with her new French Pal, Nils, in one word, it would be “funny.” I’d have to agree.

The first few days of the exchange, Paul barely said a word. I began to worry if he spoke any English at all. It seemed as if the only words he had in his vocabulary were “yes,” “no,” “kind of,” and “what?!”

My worry was echoed in the voices of my friends, we began to wring our fingers about how the fourteen days with Paul would pan out, suspended in a fluid puddle of awkward, international silence. It would have been weird.

But, on the fourth day, Paul cracked a joke. It was something about how it was so hot here that us Californians could “have a barbecue without the fire.” Relief washed over my shoulders and I laughed a little louder than I probably should have judging by the look on his face.

Laughter is a universal thing.

There were many a time when I thought I was being witty, only to be met with a look of confusion in Paul’s eyes — and his trademark “what?!” that was always abrupt and followed a puzzled pause.

5. Social Media is the great equalizer.

In the early stages of the exchange process, one of the many forms we had to fill out was a personality profile, and at the bottom there was space for additional information. I hastily scrawled my Instagram username, to offer Paul an insight into my social life (or just to get more likes every #selfiesunday).

When he followed me, I quickly returned the favor and scrolled through his feed to find any red flags that would indicate a weird obsession or a habit of kicking puppies, but there were none. To my surprise, his account looked almost exactly the same as most of the people I follow from my own country. While “do it for the vine,” might sound a bit different in French, social media phenomenons and trends happen worldwide, and are a way of highlighting the similarities between the global members of our generation.

6. Teenagers all go through the same things.

“I gained a new perspective about being a teenager in a different country,” says Alexis Navarro (‘15), who hosted Alex Marchetti, Paul’s best friend.

“Although America and France are so far away from each other, I found out that teenagers do the same things but just in a different way.”

All of this was definitely true. While I expected Paul’s iPod to have been loaded with weird accordion-heavy French music, he played music from the likes of  Nirvana and the Eagles and Hozier and the Arctic Monkeys. No accordions anywhere. They didn’t dress differently than we did, and for the most part they looked like anyone else that went to our school.

Appearances weren’t the only similarity between us, either. We all go through the same things, from having crushes to having annoying younger siblings to having parties, language doesn’t define our experiences. The experiences of one generation can be universal, no matter where they are or what accent they have.

And, teenagers are immature no matter where they come from.

“If I learned anything from this exchange,” says Claire, “I learned to never leave Paul and Alex unattended with anything valuable. Because you will come back and it will be broken or damaged in one way or another.”

7. Own the American stereotype (sometimes)!

One surprising thing about the exchange that I learned was how others perceive us. On the ride home from school one day, I asked Paul what differences there were between Americans and the French. I suggested some options– obnoxious, loud, but the response I got was much different than expected.

“Americans are a lot more friendly,” says Paul. “They are more open than the French. The character of Americans is different.”

Despite giving up my privacy for two weeks — and having to share a bathroom — hosting Paul and participating in the exchange was something really beneficial. It taught me a lot about how the Christian Brothers community is so unique to our campus, how to coexist with other people, how to keep up a conversation with a near-stranger who speaks a different language.

“I would definitely say that it was an enlightening experience,” admits Alexis. “And I’m really looking forward to [go to Avignon], just being in a new place that’s not familiar to me.” 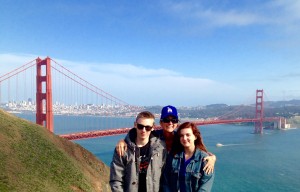 From left to right: Paul, the author’s mother, and the author in front of the Golden Gate Bridge in San Francisco.

And so, au revoir Avignon exchange students, and see you soon on the other side of the pond.