From Reims, France to Sacramento, the Lasallian tradition is stronger than ever before. St. John Baptist de la Salle was destined for a life of extravagance. Born in Reims, France to a wealthy family, he had all the options in the world. But at a young age, he chose a path which would impact the […]

From Reims, France to Sacramento, the Lasallian tradition is stronger than ever before. 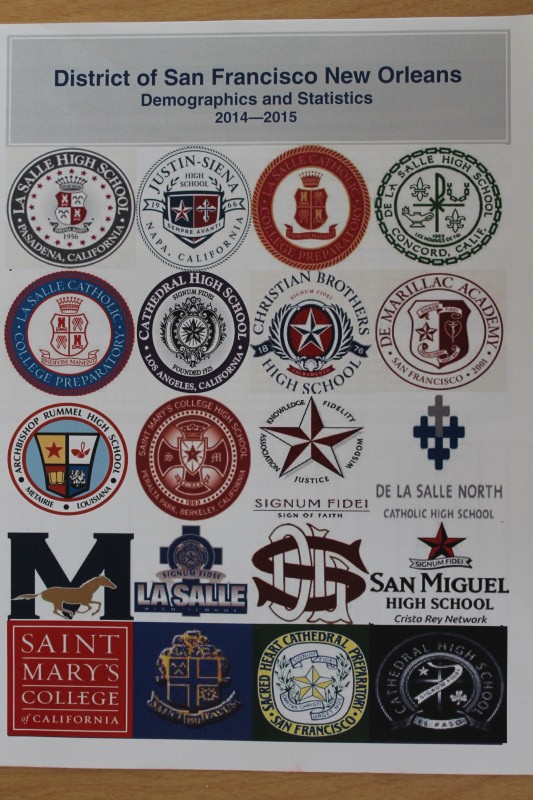 St. John Baptist de la Salle was destined for a life of extravagance. Born in Reims, France to a wealthy family, he had all the options in the world.

But at a young age, he chose a path which would impact the world forever.

De la Salle is the founder of the Brothers of the Christian Schools and of modern teaching as well. On top of reforming and enhancing the world of academia, he also worked in the streets as a humanitarian with the homeless, orphaned, and the low and middle classes to provide a more than adequate education with a strong faith aspect.

He did this to better the lives of each and every one of his students; he wanted to give them the resources to get off the streets.

La Salle and his philosophies have made it all the way around the world to over eighty countries with over nine hundred schools and currently more than 875,000 current students.

Since its inception, the Brothers have started up schools and other establishments across the world in places such as Vietnam, Australia, Pakistan, and none other than Sacramento, California.

Each and every institute, no matter the location or budget, carries the same passion for learning, the same openness to any type of person, and the same faith in the presence of God.

Because the Brothers of the Christian Schools follow the teachings and ways of St. John Baptist de la Salle, an adjective has been developed to describe them, their communities, and ways of going about their vocation.

Lasallian is the word and when at a Lasallian school, one hears that term pretty often.

Since the word is so prevalent in our communities, “Lasallian” morphs into a description of the experiences of each student.

The Lasallian web is a strong one. It brings people in with their renowned kindness, advanced education, and type of community they provide. It also brings people back for the same reasons and the fond memories people have of their time as a Lasallian educator or student.

In 1876, La Salle’s disciples and teachings were brought to Sacramento as St. Patrick’s Institute, a school for boys from kindergarten to the 12th grade. Then in 1956, Bishop Armstrong High School opened at CBHS’ current location on Martin Luther King Jr. Blvd in Oak Park of Sacramento, California.

Now, Christian Brothers is the center of everything Lasallian in our Sacramento region. With teachers who graduated from or taught at other Lasallian schools and students who are heading off to various Lasallian colleges or universities next year, CB has generations and future generations of Lasallians in our hallways and classrooms.

One of the most established and well known Lasallian schools dating back to 1876 is our very own, Christian Brothers High School. After enduring five name changes and one hundred and thirty eight years of proud Lasallian heritage, we are firmly on the list of great Lasallian institutions.

But what is really being Lasallian? And why do kids choose to continue on to other Lasallian schools? Why have teachers come back to their Lasallian homes after attending one as a student in high school and/or college or previously teaching at one?

Why are we Lasallians so special?

It starts with our community. The teachers, faculty, and students of Lasallian schools are known for creating an environment almost everyone, if not everyone, wants to be a part of. We have something for all, regardless of race or religion, and we encourage everyone to find something they like to do and go for it.

It doesn’t matter if one is new to a sport, never played an instrument, or painted before. High school is a time to develop into a young man or woman and one cannot do such without trying new things and pushing personal boundaries in some way. This is true in the classroom, the field, personal relationships and every part of a young person’s life.

The religion instructor is one of the twenty-five graduates of CBHS on our faculty and staff. He chose to attend Christian Brothers University in Memphis, Tennessee after CBHS and then out of college he got his master’s degree at St. Thomas University before teaching at De La Salle High School in Minneapolis for four years until he decided to come back to Christian Brothers for an opportunity to enlighten the young minds of his alma mater.

Reflecting on his experiences as a part of the Lasallian community and a former student, Mr. Guro always knew he would come back to his Lasallian home.

“I decided by my senior year of high school that I wanted to come back to CB as a religion teacher because I wanted to be part of this local and worldwide community,” he shared passionately. “I wanted to touch the lives of students just as my high school teachers had done for me.”

This sense of service lives in each of the minds of our teachers. Working at a Lasallian school and inspiring kids each day is service in its purest form. It is “Lasallian.”

La Salle calls each of his students to educate those in need, impact lives, and be a catalyst for social improvement. One of the Five Core Principles of the Lasallian tradition is concern for the poor and social justice. Mr. Guro believes this very phrase helped define part of his Lasallian identity.

“Our school motto of ‘Enter to Learn, Leave to Serve’ calls us as Lasallians and Christians,” he shares. “While we might not be able to change the world over night, we should do what we can even in our own local community to better the lives of those around us.” 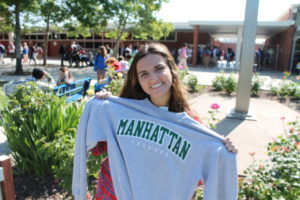 Antonia shows off her Jasper (and Lasallian) spirit swag.

Through the many experiences she has had at Christian Brothers High School, Antonia believes our social service is crucial.

“You need to give back to your community and treat all others the way that you would want to be treated,” the Lasallian community citizien says so eloquently. “Having respect for people and caring for them really goes a long way.”

With the thousands of higher learning institutions around the world and great marks in her classes, Antonia had ample options.

But Manhattan College is her choice and it was not really even a contest with other schools.

“The fact that it is a Lasallian school made me even more comfortable with my decision because I know what to expect out of a Lasallian education — the best — and that they have the same morals I value.”

Another one of CB’s finest instructors is Mr. Brendan Hogan ’95, who is also a graduate of the Buttimer Institute, an intensive program which focuses on the life and teachings of St. John Baptist de la Salle and the Lasallian tradition.

Mr. Hogan’s story is somewhat similar to that of Mr. Guro. Mr. Hogan did not even want to leave CBHS — it felt weird to him. This was because of the community and the experience he had.

This very experience is one he believes will rarely be found anywhere else.

“Here, we want what’s best for our students,” he says bluntly.

According to Mr. Hogan, social awareness and putting the students above oneself in a Lasallian environment is the very basis of Lasallian education.

“Lasallians examine this world we live in…to help the kids in front of them,” the storied media instructor says. “It’s a hard thing to do, but that’s what we are here for.”

Being a Lasallian requires us to never be satisfied and to never stop trying to improve. With so many people and so many injustices in the world, there is so much teaching to be done.

Another Class of 2015 graduate, Blake Edwards (’15) is off to another Lasallian institution this upcoming fall. The soon-to-be La Salle University Explorer quickly answered with zeal when asked about his Lasallian experience.

“Being able to go to a Lasallian college means so much to me, to be able to be part of such a great community through college is truly amazing and something I am very thankful for,” he said, “I have learned how important it is to give back and how fortunate some of us really are.”

Like Antonia, Blake had many prospective colleges, but staying Lasallian was always in his heart. After spending so much time at CBHS for the last four years, Blake developed from a boy to a young man in the blink of an eye.

The community we provide surely had a part in his transformation,

“I was very fortunate to be able to go to CB — a place where the teachers care and everyone wants you to do well.”

One of those responsible for creating said environment is St. Mary’s College graduate Mr. Levasseur. After attending a Lasallian college, Mr. Levasseur still was not exactly sure what it meant to be “Lasallian.” But after teaching at San Miguel Middle School in Chicago and now at Christian Brothers. he has created his own definition of what it means to be Lasallian.

“It’s an intangible, it’s hard to describe. I think it deals with community and relationships and serving the poor and those less fortunate,” the Co-Dean of Students says.

Don’t be fooled by his age, Mr. Dave Anderson ’07 offers insight beyond his years. After four unforgettable years at CB, Mr. Anderson considered coming back and knew if he got into teaching, he would want to be at a place like CB.

With so few schools even remotely similar to us, his choices were limited. What schools offer the same love, respect, and character that we do with our core Lasallian principles?

To Mr. Anderson, seeing these principles in action is part of what makes his job so special.

“The core principles we have really matter and even subconsciously, the teachers and students try to live them out,” he claims

At a school where quality education is central and classroom sizes rarely reach more than thirty, teachers and students are face-to-face each day with a fresh perspective and opportunity to teach or learn as we share our ideas, all while examining poetry, math, a plant cell, or the current events of the world.

“Being a student and even a teacher here, it challenges your perspective in regards to global perspectives and it focuses a lot more on others and empathy and looking out for the community,” Mr. Anderson says.

By doing service, one learns about oneself. No matter the age, we are all experiencing new things and developing each and every day.

Though our world has changed so much since the time of St. John Baptist de la Salle, his teachings still ring true. However, being Lasallian then and being a Lasallian now may have changed.

Though we have heard from teachers and current students, ultimately, what does “Lasallian” mean?

Well, I suppose that is something for you to answer yourself.