Always there, but never seen — the Tech Factor is a secret society located backstage in the Stidum Theatre. Many of the faculty and students of the CB community have seen the actors of the musical bring magic to the stage. But what you don’t see is the tech crew that works as the backbone […]

Always there, but never seen — the Tech Factor is a secret society located backstage in the Stidum Theatre. 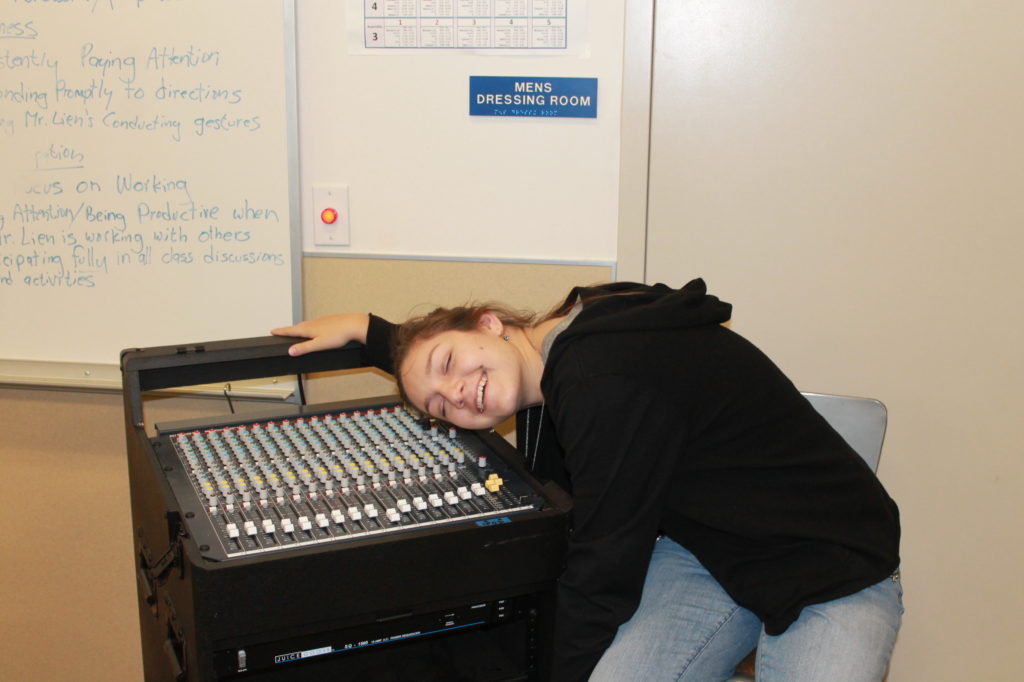 Many of the faculty and students of the CB community have seen the actors of the musical bring magic to the stage. But what you don’t see is the tech crew that works as the backbone of the entire production

The Tech Factor is a team of students on campus that help run the theater productions on campus.

They perform a variety of jobs backstage — Theatre Manager Ms. Heather Christianson ’01 says that students can be a stage manager, assistant stage manager, sounboard and spotlight operators, mic dressers, costume dressers, and stage hands to move the scenery on and off.

“There’s a lot of room for students to get involved,” she says.

The technical crew is a key component necessary to operational unity of the show.

Emily Taylor (’16), the stage manager of the current music How to Succeed in Business Without Really Trying, has been involved in the technical aspect since her freshman year says.

“It’s definitely a unique experience,” she says. “I love being able to learn from people who enjoy theater so much, and truly put their all into making the production possible.

Emily describes working with musical Director Mr. Michael Jackson and Ms. Christianson and all of the actors as, “a very eye-opening experience. ”

As the assistant stage manager, Xochitl Martin ( ’16) handles the props and curtains as well as making sure that all the actors are where they need to be back stage.

It is a demanding job that requires a lot of work, patience and time requirements in order to effectively perform the job.

“I decided to do tech for this show because I thought it’d be fun to be part of the other side,” Xochitl tells the Talon. “When you watch shows you always see the actors, but I knew that there was more to a show than just the actors. ”

“There are a lot more people involved, people who make the show go smoothly and are essential to the show, and I wanted to be one of those people,” the junior shares.

Ms. Christianson has been in and run many shows from behind the scenes and from her experience a tech crew is typically necessary for a show to be done well.

“It can be run without one, but it is never as smooth,” she shares. “A tech crew makes everything run much more efficiently and depending on the scale of the show depends, but you can’t really do it without someone running the boards or calling the show so at a minimum you need to have a crew of at least three or four.”

Technical personnel are dressed in black and they never get to take a bow or go on stage, but they give the show a special piece of magic.