Whether you see the setup of the back parking lot as a blessing or a curse, there is no way to avoid it. When the parking lot was built around 1950, Christian Brothers had only about 650 students. Now with over 1000 sudents, the drop off and pickup situation has become a bit more complicated for […]

Whether you see the setup of the back parking lot as a blessing or a curse, there is no way to avoid it. 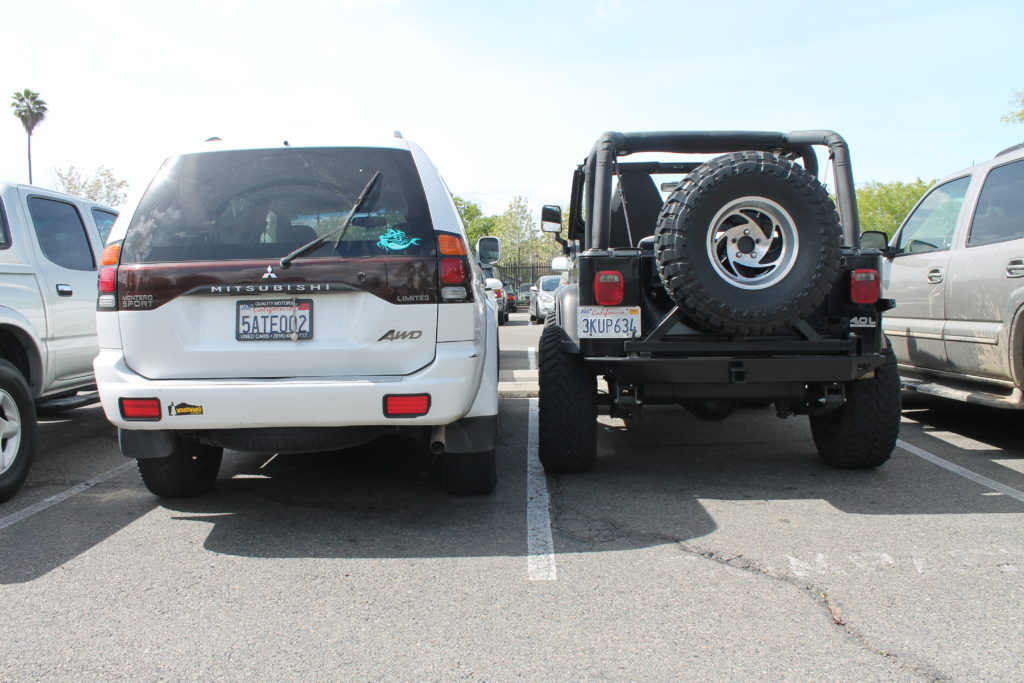 When the parking lot was built around 1950, Christian Brothers had only about 650 students. Now with over 1000 sudents, the drop off and pickup situation has become a bit more complicated for some.

Maliah Haroldson (‘16) is one of many who finds that the Christian Brothers parking lot can be difficult to maneuver around.

“There are issues with backing out after school,” the junior tells the Talon.

Another common complaint is the struggled with compact spaces Mia Matista (’15) says.

“It’s hard to find a spot that is big enough, because my car barely fits into a compact space,” she says.

But backing out and compact spots are only two of the biggest problems CB students face in the lot. Mia points out another one of the huge problems that almost every student driver can relate to; the parents.

“After school, I have to wait to leave until the rush of parents picking up their kids has gone down considerably,” the senior explains.

Leaving the parking lot seems to be the biggest problem for our student drivers, but parents picking up face problems as well.

Blanca Torres, mother of Alondra Torres (‘17), explains the trouble she sometimes faces when picking up her daughter after school.

“A lot of times they don’t let us double park,” she says.

Although Ms. Torres finds the parking situation sometimes difficult, she is always cautious.

“I know how hectic it is, and I’m very, very careful,” she explains.

Besides navigating around other parents and students, parents don’t seem to mind the parking lot as much as the students do.

“[Navigating the parking lot isn’t] super easy but it’s not that bad,” she says. “I feel bad for the students, but it doesn’t bother me.”

Even though parents don’t find it difficult, many students still wonder why parents choose to pick up their children in the back vs the front drive-through option.

Blanca and Maurice Tomassetti, grandmother of Maura Tomassetti (’15), explain that it is simply more convenient.

“Her classes are mostly out in the back,” Blanca says.

“It’s easiest for her to get out here, so I can get her to her music lesson on time,” Maurice adds.

Another reason parents use the back parking lot is convenience.

“I go south on Martin Luther [King Boulevard], so it’s easier to pull back through and go left,” Ms. Heffernen points out.

Clearly, the parents are not as overwhelmed by the situation as the students are, but the faculty is aware of the complaints the students have.

Dean of Students, Mr. Dave Levasseur has heard much of the criticism from CB students.

“A complaint that we have heard from students is that parents are waiting for their children, but [the students] are trying to back out,” he tells. “Another complaint is ‘my car doesn’t fit in this spot’ or ‘the spots are too small.'”

Luckily for the students, the faculty has been working hard to make improvements.

“We’ve told our security guards to help,” Mr. Levasseur explains. “If you can’t get out, one of the guards can help you back out.”

As for the small spots, Mr. Levasseur was not here for the creation of the parking lot, but he has a thought on why the spaces are on the smaller side.

“I think [the builders were] probably trying to get as many spaces as possible in a certain area, but at the same time allowing it to flow,” he says.

There is another challenge the faculty faces when trying to uncomplicate the parking lot, but this one comes annually, usually around January.

“At the start of the school year we have plenty of parking because the sophomores aren’t driving yet,” he tells. “But now [the sophomores] have their licenses and they are bringing their cars to school, creating parking issues.”

To fix this problem, a simple solution was installed this year.

“Recently, we made it so the student lot is now extending all the way to Bertram Hall,” Levasseur explains. “It used to be that the staff members would park there, but now they park back behind the field house.”

Even more improvements have been made to make the parking lot easier to navigate.

“We have changed certain one way areas in the past to allow for pickup in the back,” explains Mr. Levasseur. 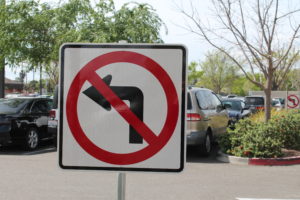 One of the many improvements in the parking lot.

Even though complaints can be heard almost every day about the setup of the parking lot, it’s nice to know that the faculty is working hard to improve upon our requests.

Speaking of requests, a few CB students have suggestions.

Mia Matista would like to see the parents change their routine to help out student drivers.

“Having parents pick up their students in the front of the school instead of the back would eliminate the double parking problem,” the senior says.

Akemi Alden (’16) hopes that the size of the parking spaces could be approved upon.

“A possible improvement would be to make the spaces bigger,” she says. “Realistically, this probably won’t happen because of the work, time, and money that would need to be invested.”

Although Akemi realizes that bigger spots would be a hard task to complete, she has another suggestion. 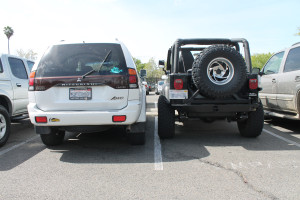 An example of not so compact cars, parking in compact spaces.

This suggestion seemed to pop up quite a bit, so why not create a designated parking spot for each student driver and their car? Mr. Levasseur answers.

“It’s a good idea, and I’ve thought about that,” he says. “But not everyone drives to school every day.”

If not everyone is driving themselves to school everyday, some of the designated spots would go to waste on certain days.

There is also another problem with this idea according to Mr. Levasseur.

“Right now we don’t have as many spots as we have drivers,” he explains.

“For entering [the parking lot], we could strongly enforce a rule that would makes parents and students allow one car to pull in front of them to allow them to enter the parking lot,” he says. “When entering the lot in the morning it is very hard to drive in because people don’t allow me to pull in front of them,” he explains. “I may be waiting a while, which then backs up the whole street.”

Jules’ other great suggestion applies to the after school problem.

“For leaving, parents could either keep driving in the parking lot as they wait for their child, or find parking that does not block students’ vehicles,” he says.

All of these suggestions are fantastic and will hopefully be taken into consideration by the faculty, staff, parents, and students.

To summarize, Christian Brothers students have created a list of tips for parents and fellow students.

Maliah has a bunch of great tips that should help things flow more smoothly.

“If you are picking up your child in the back parking lot, please come later,” she says. “Let your child wait for you instead of the other way around.”

She also hopes that “parents would stop parking right behind student’s cars. Instead, find an actual parking spot.”

Mia also wishes that parents would park and wait in parking spots, but she also has a great tip to avoid a traffic jam in the lot.

“Parking in the center lane is a huge no-no,” she says. “That is not a waiting zone, parents park in front of parked cars and then the students can’t get out.”

Jules makes this problem even easier for parents with his advice.

“If students get in their cars and try to leave but [a parent] is blocking them, parents must drive their car around so the student can leave.”

Allowing students to leave would create less havoc and would open up spots for other parents to park in and wait for their children.

Akemi also has a great advice for parents trying to leave the lot.

“When you are pulling out of the lot, it is much easier to turn right than left,” she tells.

Going left rather than right would create a much smoother flow. If going south is the goal, turning right out of the lot, then a few left turns and a right would put you right back on MLK. 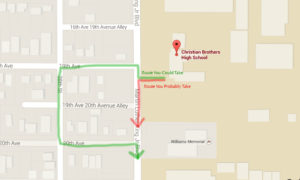 Parents are a big part of the CB community, and the students want to make the parents’ experiences in the parking lot comfortable while asking that the parents think of the other students as well as their own.

Likewise, students have tips for their fellow Falcons.

Akemi has a tip for student drivers which should really help with after school traffic.

“If you can, park backwards into a spot,” she says. “It makes pulling out of a space so much easier.”

She also has great advice on how to arrange your parking lot schedule.

“To avoid the after school traffic, either leave right after school before everyone is leaving the lot, or wait until [the lot] clears out a little,” she explains.

Jules has advice for students who know they are being picked up.

“If your parents are picking you up, get out to the car a little quicker, that way the traffic in the lot isn’t as bad,” Jules says.

He also gives one of the best tips for all drivers, whether they are in the CB parking lot or not.

“Be patient, be kind, and allow others to pull out of parking spots if you can,” the senior shares.

Mia’s tip applies to many new drivers, who have not quite mastered an important trait.

“Try to park inside the lines,” she says.

Notice how Mia said IN the lines, not ON the lines. One car parked too far over can create such a mess, and it screws up everyone else’s parking. 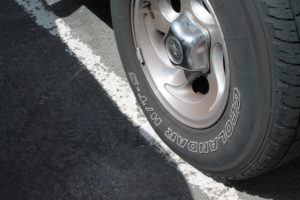 Parking inside the lines instead of on them can help things flow a lot easier.

For the parents and the students, the Golden Rule can be applied. That is, treat others how you want to be treated. Half the havoc in the parking lot could be avoided if all the students and parents worked together and stayed polite to the fellow members of the Christian Brothers Community.

Whether you are a student driver or parent driver, you are in control of how courteous you are to others in the parking lot and on the road.

Be smart, polite, and stay classy.