The Black And White Market

The Talon buys an essay — see how it stacks up against CB’s rigorous grading policies. It all started when a fellow senior, who shall remain anonymous, sarcastically tweeted that he would “Pay someone to write [his college] essay” for him. While the statement was seen as a joke by his friends and followers, some shrewd business-people […]

The Talon buys an essay — see how it stacks up against CB’s rigorous grading policies. 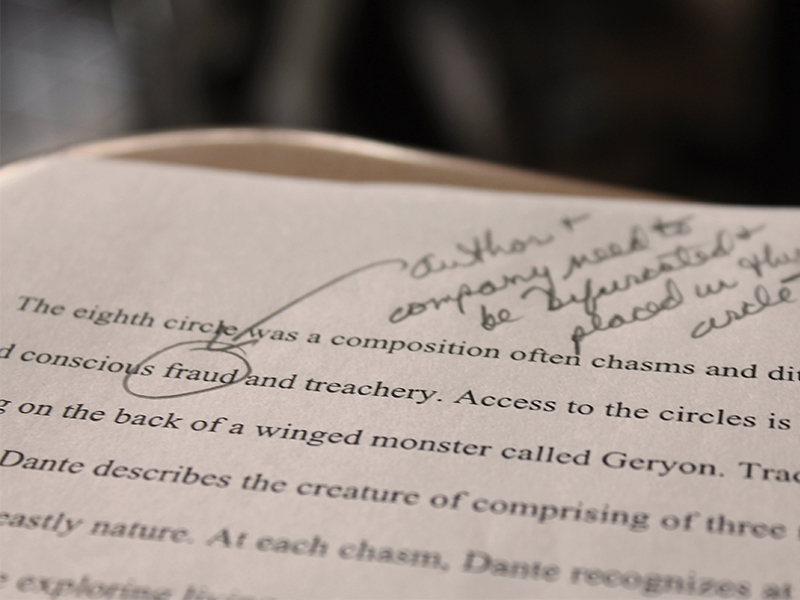 It all started when a fellow senior, who shall remain anonymous, sarcastically tweeted that he would “Pay someone to write [his college] essay” for him.

While the statement was seen as a joke by his friends and followers, some shrewd business-people online seemed to take the innocent complaint as a legitimate demand. Within seconds of the posting, a slew of automated Twitter accounts had replied, each excitedly offering to pen his essay for him.

But could it really be that simple? Could a Tweet, a few dollars, and a week’s wait really be the solution to all of a CB student’s problems?

With such promises as a “plagiarism free paper” and a “‘B’ or better” guarantee, it all seemed a little too good to be true.

So, in the name of investigative journalism, I took it upon myself to get to answer the questions: Could an essay bought from an outside source pass the plagiarism test, and how would it stack up against CB teacher’s high expectations? (Hint: not very well.)

So I published my own Tweet (pictured), this time about a completely made-up essay, as bait for the scores of scavenging Twitter-bots. With the unexpected side-effect of terrifying my diligent classmates who thought that we actually had an essay due, it accomplished its goal, and within minutes I had six different services to choose from.

Next, I approached Ms. Marian Shackel and Mr. Tom English, for a prompt for my imaginary paper. Together, they crafted a challenging question about Dante’s Inferno, but one which the so-called “professional writers” should be able to tackle without a problem.

Finally, I pulled a few strings with Talon Adviser Mr. Dave Anderson and the media department and secured funding for the essay, so I would not be forced to pay out of my own pocket.

With a prompt, some funding, and a slew of offers to choose from, I embarked on a journey to assess the merits of purchasing a paper, and uncover the secrets of the black and white market.

From my list of potential suitors, I chose to buy from Academic Writers. (Their branding was irresistible — come on, their Twitter icon is a proud graduating student, clearly symbolizing the success that I would have after using their service.)

Their website home page, which is littered with stock pictures of beaming graduates and well dressed business people, makes it surprisingly simple to input a number of pages, a due date, a preferred format, and level of “quality” that the essay requires.

After inputting my prompt and preferences, all that was left to do was pay and wait.

To the site’s credit, the process was fairly easy. I even used a first-time coupon code advertised on their home-page, which reduced the price a full 20%.

Then, come Sunday, a full three days before the essay was “due”, another surprise: the essay came early!

Lastly, after running the essay through plagiarism screener turnitin.com, I was amazed to find that the essay only had a 6% similarity index — a stat on par with or even lower than many student written essays, including my own.

So far, my essay purchasing experience was entirely positive.

For a second I thought that maybe, just maybe, buying an essay could be an efficient, even if amoral, alternative.

In the words of Honors American Literature Teacher Ms. Chrys Cassetta, the essay was “tragically bad”. At several points, the poor grammar, abysmal structure, and blatant misinterpretation of the plot of Dante’s Inferno are borderline comical.

But rest assured: even if you, the reader, are completely unfamiliar with the epic poem, you shouldn’t feel too lost– the entire essay is summary anyway.

Some highlights (for lack of a better word) include, but are not limited to…

and, perhaps most importantly…

My personal favorite error comes in the very first sentence, which references the “quartet” works of the Divine Comedy — one of literature’s finest trilogies.

Simply put, the essay is not what was paid for. Actually, it wasn’t even close.

Ms. Cassetta, who had taught me the previous year, caught on early in her grading process that it was, in fact, not actually my writing; But when I informed her after the fact that I had purchased the essay for $35.80, her jaw hit the floor.

“Forty Dollars!”, she exclaimed in disbelief, as though to scold me for my poor investment. I, of course, felt obligated to clarify that that was, in fact, after applying the coupon code.

Talon Adviser and Literature instructor Mr. Anderson, who knew from the outset that the essay was purchased online, found reading the paper to be far more entertaining than enlightening.

“Oh look, a citation!”, he enthusiastically pointed out, “…in the — one, two, three, four — fifth paragraph!” He was, of course, left disappointed when he saw that the citation was not actually linked to any actual quote from the text.

Even Mr. Tony Caselli (’97) shredded the essay upon his review.

“I have no idea what the thesis is,” he explains, “At no point in the essay is an argument presented… [it] reads like a simple retelling of The Inferno — a book report”.

While the instructors of the Literature Department collectively lampooned the fraudulent paper for its lack of analysis and commentary, CB’s resident historian and Inferno fanatic Mr. English found just as many problems with its content.

“[Some] specifics would have been helpful,” he calmly complained in the side margin on the first page. His visible frustration with the paper’s misconstrued facts quickly escalated, however. “This is ridiculous!” he wrote towards the end of the third page, “I am ready to scream!”

By far the harshest critique, however, came from Accelerated Freshman and AP Literature and Composition instructor Miss Shackel.

After spending “a good 40 minutes” grading the essay (more than any teacher should have to, and certainly much more than I had asked her to), the annotated paper that I received in return looked for the most part, like this. 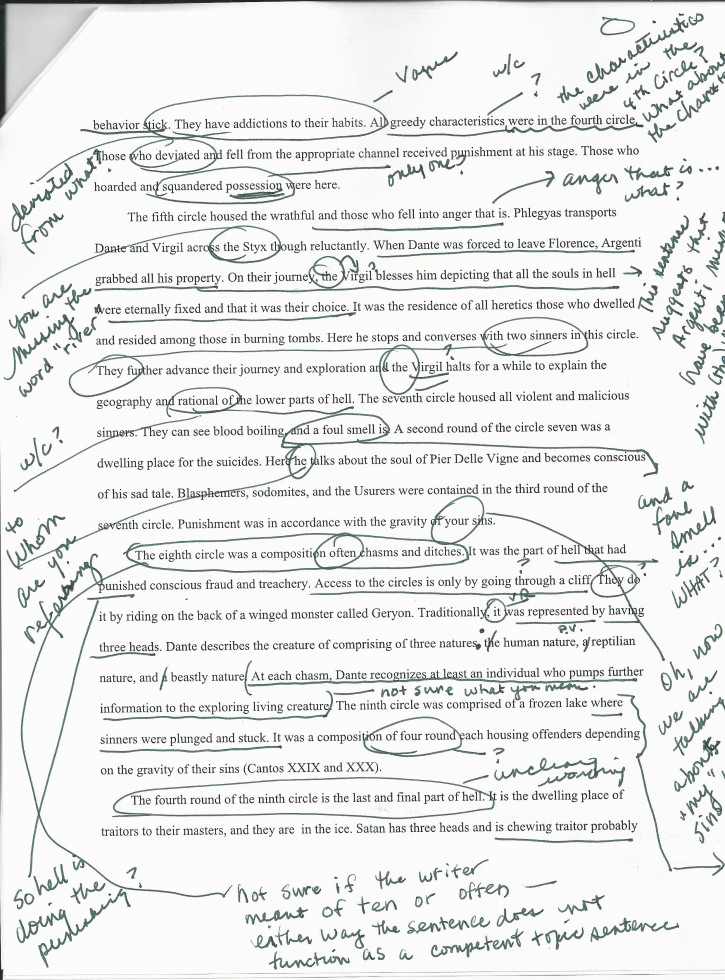 A sample of Miss Shackel’s many, many comments on the essay.

“The paper deserves an F”, she explained confidently, “but because the student presented an essay… [a] 59 seemed appropriate.” ‘F’ for effort, I suppose.

When I jokingly attempted to have her raise the grade by citing the company’s ‘B Guarantee’, she couldn’t help but chuckle. “‘B’,” she whooped, “More like BS!”

But regardless of how many grammatical errors, spelling mistakes, or plot inconsistencies Ms. Shackel seemed to circle with her trademark green pen, no marking could highlight the real problem of the essay: the things that simply weren’t there.

“The essay failed to mention what I consider to be the two cardinal rules for writing at CB,” Miss Shackel writes in her concluding comments, “It provided no detail and no commentary” and “it did not attempt to answer the prompt.”

“It’s just not what we are trying to teach,” she concluded, speaking on behalf of the entire CB Literature department.

And that’s the real problem.

Should the essay have actually been turned in, it would not have simply received a poor grade, it would have been a downright insult to the teacher, and to the school’s mission as a whole.

From the English Department’s mission statement:

“…the English Department strives to help students develop ethical, religious, aesthetic, and cultural values using discussion, writing, and literary analysis. The department develops writers who can think critically and write effectively both in college and throughout life.”

This essay simply did none of those things: It didn’t discuss, it didn’t analyze, and it sure as Hell (pardon the pun) wasn’t effective.

From the teachers who graded the essay, it received grades of:

At its best, the “essay” was a poor retelling of the story of The Inferno, albeit one that didn’t add much to the equation. At its worst, though, it was an abysmal, jumbled mess that somebody was paid to print on paper.

And that, perhaps, is the most astonishing thing: we paid for this, and it was some poor soul’s task to write it.

Each teacher seemed to have their own theory as to where it came from: a computer, a lazy slacker behind a computer screen, a foreign exchange student with little understanding of the English language, and the list goes on. But you don’t have to take my word for it — just look at the grades the essay received: Your writing is better than that of these so-called “professionals”, whoever they may be.

In conclusion, and without even having touched upon the moral aspect of buying a school assignment, the Talon has chosen not to condone the use of online services to write your essays, on economic and academic grounds alone.