Come And See: The Immersion Experience

Come and see all that the rest of the world has to offer — this is what the Ven a Ver program here at Christian Brothers High School aims to bring to its participates. Ven a Ver is a service immersion program that allows a select group of junior Falcons to immerse themselves in the […]

Come and see all that the rest of the world has to offer — this is what the Ven a Ver program here at Christian Brothers High School aims to bring to its participates. 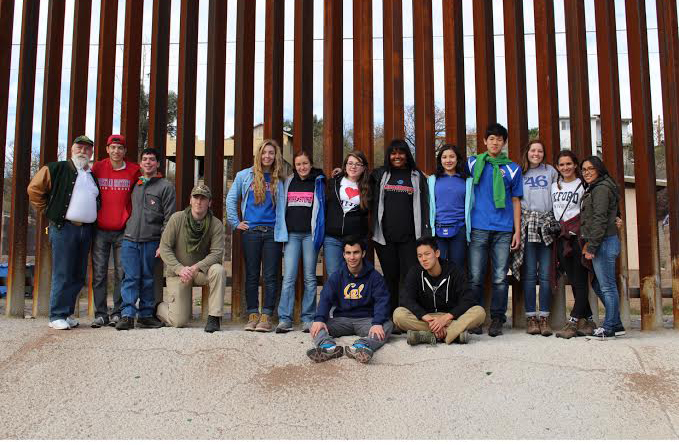 Ven a Ver is a service immersion program that allows a select group of junior Falcons to immerse themselves in the problems that plague other places in North America.

Director of Christian Service Ms. Jennifer Lystrup started the Ven A Ver program many years ago and it has continued to grow and expand into something that most juniors aspire to participate in.

“The Brothers really felt that it was important for students to have an understanding of what was going on in the larger world and to do service,” Ms. Lystrup says of the origin of the Ven a Ver program.

The participants of Ven a Ver get the opportunity to not only serve, but to also learn and grow in just a few short days.

“The immersion is a different type of education,” Ms. Lystrup explains. “It is a direct service, but there is also non-book education that is happening there”

This unconventional schooling that she is referring to comes from talking to people who have different experiences than you and from truly immersing yourself, such as visiting shrines of people who died trying to cross the Mexican-American border, walking down skid row, or attending ritual Native American ceremonies.

Although the Ven A Ver program is already something spectacular, there is always room for growth and development.

“We are putting a civil rights immersion in Memphis together and we planning on bringing back Yakima, Seattle and do an environmental immersion,” Ms. Lystrup says.

Adding immersions is never an easy thing to do — it takes hard word, dedication, and funding.

“Funding is always an issue and its always hard to find a place to go [for an immersion].” Ms. Lystrup says. “My goal is that we get more funding, and that we have at least five or six immersions. This would give all students in the junior class an opportunity to really experience this”

In the last two years, the Ven a Ver program became something exclusively for the junior class.

“The seniors have Kairos and many other things on their plate and junior year is a really good year to begin to get exposed to something larger than yourself,” the social justice teacher and activist says.

With more funding, there will not only be more immersions, but the current immersions will grow into something more than they already are.

“We want to make the immersions more well rounded because I feel strongly that for students to go on an immersion it should not be just to go down there and serve,” she adds.

The “we” that Ms. Lystrup is referring to is her dedicated team of teachers like Mr. Thomas Guro and Ms. Anna Fernandez as well as other dedicated teachers who give their time to accompany students on their immersions.

The only downfall to the Ven A Ver program is the limited number of slots there are for juniors. This problem will be mitigated by adding more immersions, though. The process is to become a part of Ven a Ver is very competitive.

Although the program is somewhat selective, students should not be discouraged from interviewing. I had the privilege are participating in Ven A Ver: Nogales and it was one of the most fulfilling experiences of my high school career.

Ven A Ver invites students to come and see, and what is seen at these immersions is mind opening.