A Christian Brothers legend in the making reveals his personal ideals and interests which make him the unique young man he is. What type of person enjoys The Notorious B.I.G., The Big Lebowski, and Libertarian ideals? And what are the odds that this same person has a better-than-usual chance of getting into Harvard, Penn, and […]

A Christian Brothers legend in the making reveals his personal ideals and interests which make him the unique young man he is. 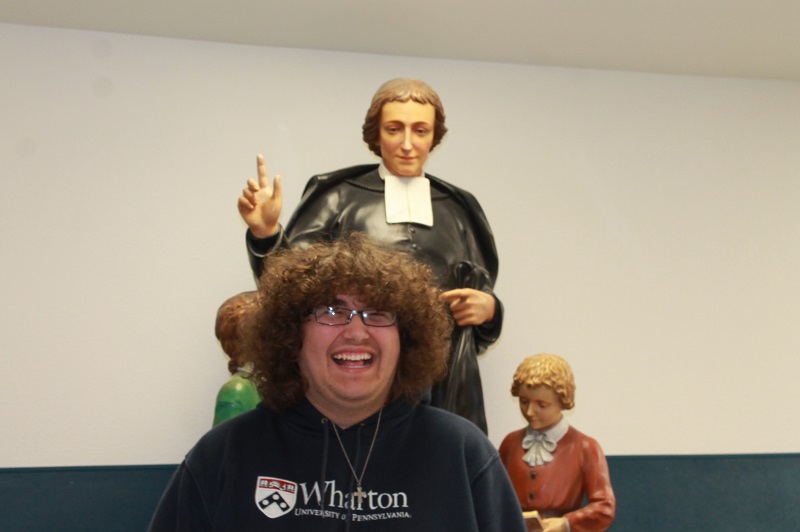 What type of person enjoys The Notorious B.I.G., The Big Lebowski, and Libertarian ideals? And what are the odds that this same person has a better-than-usual chance of getting into Harvard, Penn, and M.I.T.?

His name is Daniel Kever (’15) and he is a low-key celebrity at Christian Brothers High School, especially for those who know him or are blessed to have a class with him.

He is renown for his easy-going nature and “chill” attitude in everything. But make no mistake about it, Daniel works hard in the classroom.

His staunch ideals about personal freedoms and limited government are unmistakably voiced in his AP American Government class.

Chief Keve (an allusion to modern day rapper Chief Keef) is not afraid to voice his opinion on any and everything and, as he puts it.

“I can just hear about any issue and pretty much have an opinion on it,” he says.”I’m a libertarian and I have very defined beliefs.I know what ideas I believe in and what ideas I support, so I don’t need to think about an issue because it is going to fall into somewhere in my belief spectrum.”

Daniel’s academic prowess is storied. There are numerous stories from a multitude of people who claim teachers mercilessly call on Daniel in class, thinking they have caught him off guard and will stump him, only for Daniel to respond immediately and impressively.

Besides taking many AP and Honors courses, the hardcore libertarian competes for the CBHS Moot Court team, which has enjoyed great success the past two years, in part thanks to Daniel.

With such high marks in all of his classes and high test scores as well, the likes of Harvard, Penn, and M.I.T. are all strong possibilities for Daniel.

Immediately after his statements about his formed political beliefs, Daniel explained his love for the renowned movie, The Big Lebowski.

Though polarizing, this movie has, over time, been recognized as a significant piece of cinematography by the National Film Registry. The main character, Jeff “The Dude” Lebowski, is known for his incredibly easy-going and care free attitude in life.

Daniel tries to face life with the  same outlook as The Dude.

“The Dude is an aspiration,” he claims. “If I could live my life in a bathrobe with my bowling buddies, then it’s all good, man, what’s the worry about? I’m just chilling.”

Though Mr. Kever may draw certain aspects of his personality from the Dude, his incredibly calm and laid-back personality is completely natural. Before mentioning The Big Lebowski, Daniel presented his short but poignant life motto, “I just try to relax and go where life takes me.”

“People get mad, and they get angry and it’s like…there no time for that. I could worry,” he shares. “But that never helped anybody. I don’t know anyone who worries a ton and they do way better for it.”

How much more laid back could one be? It is refreshing to know someone like this in a world that is so caught up in the “now” and getting things done as quickly as possible.

Another identifying and unique characteristic of Chief Keve is his taste in music. Daniel Kever is an avid listener of the musical stylings of hip hop and rap, specifically, the Notorious B.I.G. , who he thinks is the greatest rapper of all time — and he had many reasons to back it up.

“Well, Biggie has the flow,” he started off. “People can talk about Tupac. Tupac’s a lyricist. Tupac has got great meaning. I don’t dispute Tupac is one of the greatest rappers of all time. But Biggie has the flow. To quote the man himself, ‘Biggie flows sweet like licorice,’ ya know?

“It just doesn’t get better. You listen to his raps and you…you just get immersed in the music. It’s an experience, ya know? With Biggie you can just sit back and you experience the music.”

Now that quote, needs no explanation or interpretation.

With such a broad, well-rounded range of interests and an unrivaled attitude towards life, Daniel is truly one of a kind.

Any of Daniel’s aspiring schools would be lucky to have such an intelligent, free, and refreshing individual as he.