Microwave Culture: Survival Of The Fittest

Things get heated around the CB microwave.  When the lunch bell finally rings after E set, second only to the rush for the cafeteria, the mad dash for the microwaves ensues. With the limited amount of space matched with the scarce amount of time, the ‘Microwave Mob’ can go a bit overboard in its single-minded quest […]

Things get heated around the CB microwave. 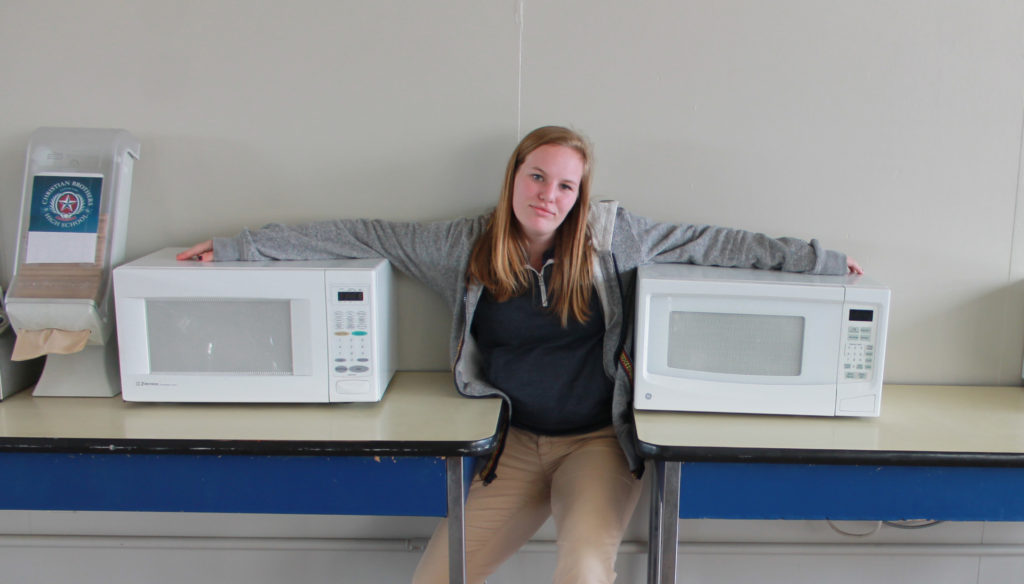 When the lunch bell finally rings after E set, second only to the rush for the cafeteria, the mad dash for the microwaves ensues. With the limited amount of space matched with the scarce amount of time, the ‘Microwave Mob’ can go a bit overboard in its single-minded quest for warm leftovers.

The microwave frenzy isn’t for the faint of heart. As a microwave regular, I’ve learned that there’s a certain etiquette that exists in the microwave line.

Let’s break down the various types of microwave users: first, there are always the over-timers. Nothing is worse than the possessive microwaver who puts his/her Amy’s Four Cheese Lasagna in the microwave and punches in ‘7:00‘.

This is not the time to cook your Thanksgiving Dinner. The microwave is designed to be a quick and easy way means of warming last nights food. Anything more than ‘3:00‘ is committing a microwave felony.

Then, there’s the over-stuffers. These are the ones who shove ten things into the microwave, counterbalanced and lopsided against each other while awkwardly vying for an evenly heated space in the tiny cramped microwave.

When it comes to the microwave line, it’s always best to show up early. The gym’s prime location to the cafeteria gives Frank Huntington (’15) a VIP pass to the microwaves. “I get ecstatic when the F set Health & Fitness bell rings before lunch,” he gleams.

Rest assured, there are always the unfortunate souls who show up late to the microwave line thinking that after fifteen minutes the line won’t be as long (sub tweet to Bailey Heng (’15)). These microwave regulars valiantly push through the crowd of hungry students, only to be faced with full microwaves, at which point they gloomily look down at last nights pizza, glance back to the stone-faced mob, and decide that they’ve always liked cold pizza better anyway.

When there is a line of people waiting and everyone is staring at the microwave clock internally counting down along with the display, there is a lot of pressure being the person with his/her food in the microwave.

I know being in the spotlight makes you think they all wish the microwave would just go ahead and beep so they could put their own food in it. So you probably think that stopping the microwave with five seconds left would make you the microwave martyr.

You would be wrong.

Simultaneously watching the countdown is a microwave-only bonding experience. Everyone is reminded of New Years Eve as they count in unison from ten to one and ending in a satisfying beep. Stopping the microwave before your food is completely done cooking interrupts the ebb and flow and makes everyone a little unsettled with the entire microwave experience. Don’t be the guy who ruins everyone’s day.

And more importantly, it leaves the remaining five seconds still on the microwave screen, so the next one in line will have to clear out the old time before pressing in their time, which adds unnecessary additional time. As a result, your attempt at lunch time martyrdom will actually just result in more frustration and hunger.

All of these struggles make the quest to heat up food in the microwave sound much less appealing than overpriced pizza from the cafeteria. Standing amidst my fellow leftover regulars, I often find myself pondering “is it even worth it?”

I’ll never forget my sophomore year, when I tragically decided that it was finally time to brave the microwaves — the microwave was so over-packed that I spent my entire lunch cleaning tomato soup.

But sometimes you’ve just gotta do what you’ve gotta do to be as economical as humanly possible. There’s something about warm spaghetti on a Monday that sets up the week to be a good one.

So if you decide to endure the microwave struggles, fare thee well— but I think I’ll stick with my peanut-butter sandwich.