CB Falcons share their most humiliating moments. What would high school be if you didn’t once feel the unbearable torture of your stomach churning from the presence of pure embarrassment? Everyone has had an embarrassing moment whether they are willing to admit to it or not. We’ve all heard of the common undersized freshman with […] 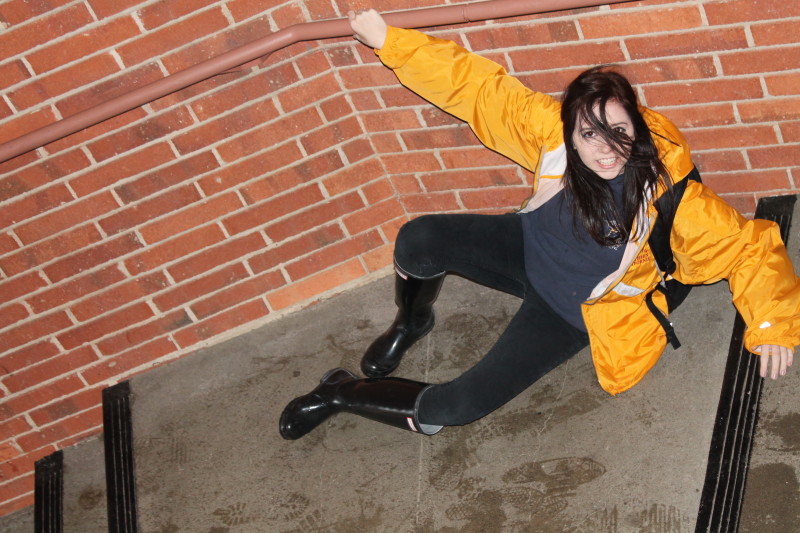 What would high school be if you didn’t once feel the unbearable torture of your stomach churning from the presence of pure embarrassment? Everyone has had an embarrassing moment whether they are willing to admit to it or not.

We’ve all heard of the common undersized freshman with an oversized backpack tumbling down the stairs in the middle of passing period. Everyone stops for a second and casts them a look of pity while trying to hold back their smiles.

Anyone who has been in this position knows the worst part is when someone comes up to you and asks if you re okay.

Sydney Swanson (’15) is a victim to falling down the stairs.

“My freshman year it was raining and I decided to wear Toms which wasn’t a good idea,” she says of her uncomfortable experience. “The stairs have no traction on them whatsoever. I was walking with one of my friends down the stairs arm in arm, and so one of us slipped and we literally rolled down a whole half of those stairs and landed on the median.

On the bright side, the sophomores got free entertainment that day,

“When we looked up the whole sophomore class just stopped and stared” said Sydney barely containing her laughter.

Many of you may have heard the name Jacob Chelini (’15) more than once on the Christian Brothers Campus. Or perhaps you know him by one of his self established nicknames, Chili Dog, Che-lollipop, or Jake from State Farm.

Chili Dog really stood out in my quest to discover CB’s most embarrassing moments. I don’t know if was due to his eagerness to share his memories, or just the fact that he had so many memories to share that I was forced to cut a few.

“It was Social Justice [class] and we were doing yoga for one of the classes and I had these pants that were like a light weight, a little too small, and I don’t know what pose it was, but it just ripped [gestures to his crotch]”

“The worst part was I walked our to get my P.E. Shorts and all of the shadows were coming at the same time and I had to go around the entire school looking for someone to open the locker room.”

Jacob’s pants problem faintly resembles the Spongebob Square Pants episode when Spongebob ripped his pants and sang a catchy song about it although I’m sure seeing Chellini do it was 10 times funnier. But still I’d hate to be the unfortunate soul behind him. A case of wrong place wrong time in its most terrifying form.

Chili Dog’s embarrassing story doesn’t end there, in fact it only gets better as him and his friend Daniel Patterson (’15) reminisce on the time Chelini passed out during liturgy.

“My fainting was a medical issue, I don’t know how that was embarrassing” says Chelini. Daniel, however, interprets the event a little differently,

“I was embarrassed,” Daniel says. “We were over there kinda by the bleachers for the sophomores, and I looked at him and he’s falling so I catch him but then Coach Wyley looked at me so I dropped him but you fell so I caught you, and everyone was looking at me.”

“Then I woke up with no shirt on in the trainers room and I had no idea what happened,” Jacob adds.

Thinking about how this happened in front of the entire student body, the teachers, the staff, the priest, and even the holy Eucharist, makes me cringe.

Students aren’t the only ones who have experienced the haunting ghost of embarrassment. Falcon teachers have as well, including our very beloved Mr. Vince Leporini.

Mr. Leporini is notorious for his awkward personality that offers a sense of humor in the class room. He never fails to keep the students engaged with his funny stories.

It’s no secret that Mr. Leporini is one of our younger teachers at CB, especially when he shaves his beard. This youthful look unfortunately confused a high school girl at a school he was teaching.

At a high school dance that Mr. Leporini was chaperoning, he only wanted to “cut through the crowd to get to the dessert table faster”

It was dark and hard for Mr. Lep to see people in full detail. A girl, probably eager to prove herself, saw him and mistook him as a student himself. She started to provocatively dance on him, which obviously is not okay considering he was a teacher.

Mr. Leporini cleared out immediately and to this day is still traumatized, saying he “tries to avoid school dances at all costs”.

Who can blame him? All the guy wanted was a cupcake.

The girl is the one who should really be embarrassed. Can you imagine walking around your school after that. Having to see him everyday as a teacher, terrified he would recognize you. Absolute torture.

But, it makes a great story for us readers, I guess good really can come out of the worst situations.