The religion teacher, philosopher, gentleman, and his love affair with M. Night Shyamalan’s Signs.  There are many great traditions that have stood the test of time through the history of Christian Brothers. From the heated QSP battles between Mr. Hogan and Mr. English, to Mr. Eckel setting off the fire alarm at least once a […] 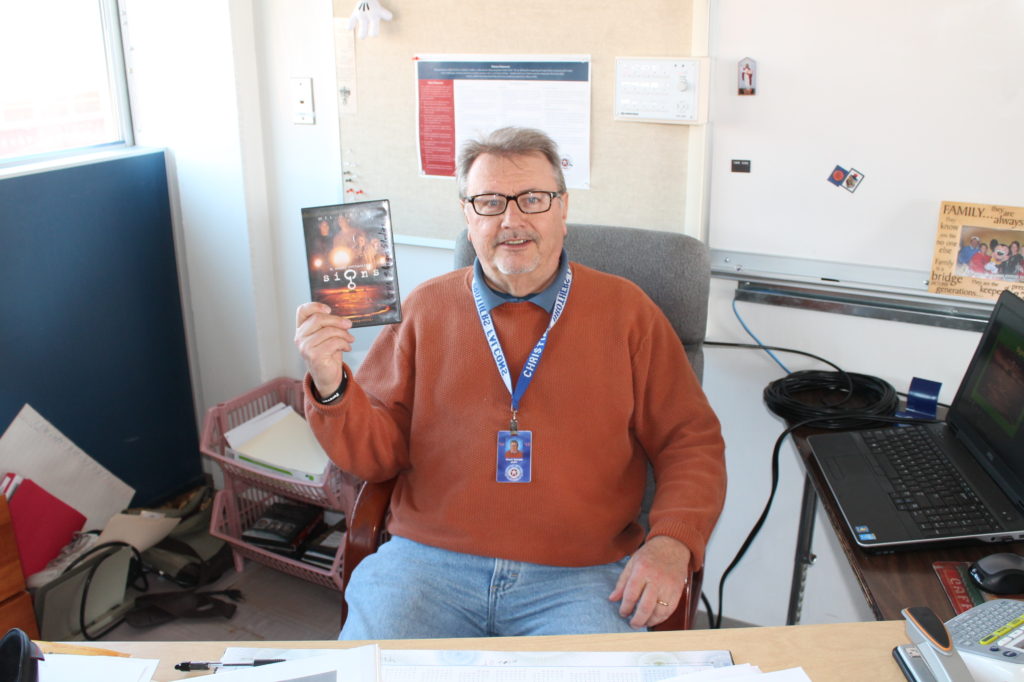 There are many great traditions that have stood the test of time through the history of Christian Brothers.

From the heated QSP battles between Mr. Hogan and Mr. English, to Mr. Eckel setting off the fire alarm at least once a year, CB is full of extraordinary customs.

However, the best tradition happens every semester in room 203 in the room belonging to the one and only Mr. Chuck Zanetti.

So what is this magical tradition that I speak of? Well ladies and gentleman, this is the tradition of the beloved movie Signs.

This film is shown to the few lucky enough to grace the presence of Mr. Zanetti in his religion classes. It has often been described as a life changing experience and can give the audience a rush of exhilaration just by viewing it.

So what is Signs? I would say that words cannot do justice to the true beauty of the silver screen masterpiece. However, since I must inform you on it, Signs is a gift from God that was delivered straight from the heavens into the hands of Mr. Zanetti.

Well maybe not, but it is a critically acclaimed thriller full of suspense, extra terrestrials, and even some carefully placed signs and symbols (coincidence?).

Signs hit the box office back on August 2, 2002 and featured the dynamic acting duo of Mel Gibson and Joaquin Phoenix, under the writing and direction of M Night Shyamalan, who takes you on a journey to find the truth behind an unfolding mystery.

Realizing the potential of this instant classic, Mr. Zanetti knew he had to share the experience with his religion students.

“I started showing it not long after it came out in 2002,” he remembers. “The symbolism and the faith journey that this guy, Graham Hess the main character, goes through from loving God, to hating God, to reconciling with God is awesome. Did I mention the symbolism?”

Oh yes, the sweet, sweet symbolism. As you may have figured out, it’s abundant throughout the film.

After ten plus years of showing the cinematic gold, Mr. Zanetti has honed symbol searching skills and has developed a personal connection with the film.

Click on the image to watch Mr. Zanetti admire his beloved film.

“It helps me understand my faith experience and I’m always seeing something different — students are always bringing up something different,” he states. “If there’s 30 people in the room they’re seeing stuff I’m not seeing. It really enriches my experience of it, so it’s an ongoing thing.”

Signs has really grown on the student body over the past years as well. Few students have been blessed to experience the film in the presence of the Mr. Zanetti, much less view it multiple times such as Christian Brothers senior Kevin Stenvick (’15) has.

“I think it’s a fantastic movie to show a high school religion class,” says Kevin, who recently embarked on his third viewing of the movie, twice with Mr. Zanetti and once on his own after he too jumped onto the Signs bandwagon.

“Signs has helped me realize that everything happens for a reason,” remarked the intuitive senior. “Through his unique story telling ability, M. Night was able to instill in me that although it may be difficult to see sometimes, the man upstairs has a plan for each and every one of us.”

When asked which character in the movie they would want to be, both Kevin and Mr. Zanetti settled on Mel Gibson’s brother Merrill, played by Joaquin Phoenix.

“He steps up big time to help raise his niece and nephew and turns out to be a true hero in the end,” Kevin says.

“My favorite line in the movie would of course have to be ‘Swing Away’,” added the current CB baseball player.

Mr. Zanetti had to agree saying, “I think I would want to be the brother, Merrill because he’s an athlete, he’s a baseball player, he’s hanging in there with his brother, and he’s sacrificing for the family.

“Plus I’m a capable hitter,” says the former ball player. “He hit a ball for 504 feet and I have done that myself, so I kind of connect with that.”

As a first time viewer, I definitely give Signs two thumbs up as it does a phenomenal job incorporating a religious undertone into the theme and really relates well to the topics of our everyday religion classes. It’s an all around wonderful film and Mr. Zanetti is thrilled that is has resonated so well with the students.

As long as Mr. Zanetti is around, Signs will be too.