How well do we really know this iconic student? 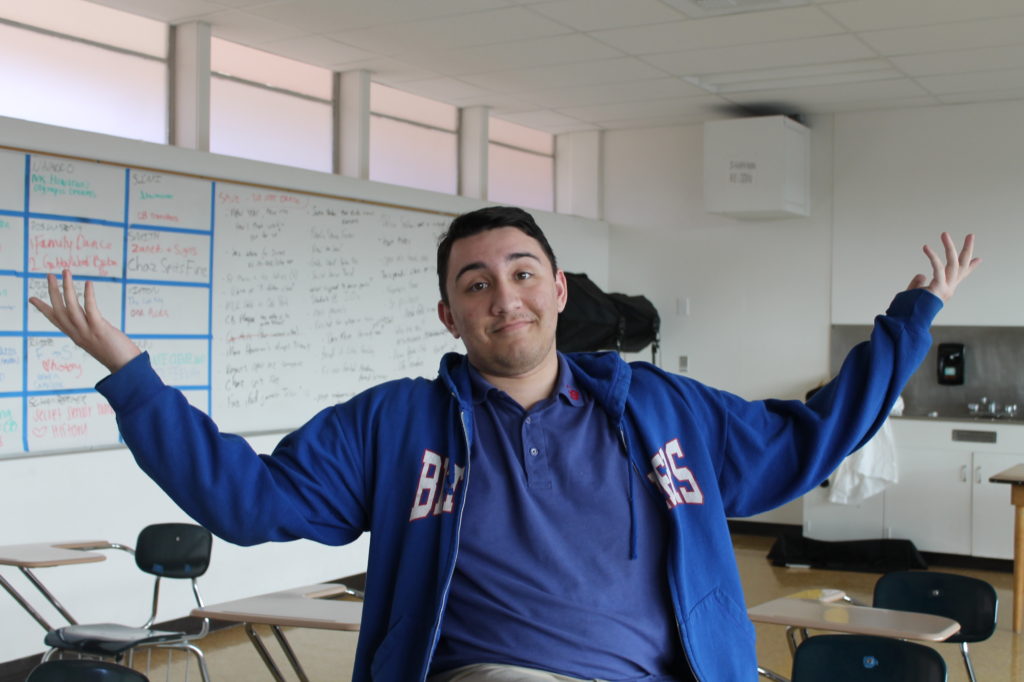 Michael has become somewhat of a legend over the years at CB, due in part to his unconventional opinions and penchant for intense debate.

Though Michael isn’t the first person you’d dub “hipster,” his unconventional approach to life suggests he may be the only true hipster at CB.

He’s a mystery, an anomaly roaming (and occasionally arguing) among the student body. Stirring up controversy in the classroom is nothing new for Michael.

But is there more to the man than blue polos and messenger bags?

Though I don’t think anyone will ever fully understand Michael, I set out to get a better idea of who this mysterious student is.

I don’t know whether it was the fact that I shared F set Social Justice with him last semester or just some insatiable curiosity that inspired me to take up a conversation with him. I’m both fascinated and confused by him, and the medley of the two has only made me want to talk with him more.

But trying to find him wound up being the first challenge.

Michael lives somewhat off the grid. He lays low most of the time, retreating to quieter and more private areas. Except, of course, when you happen to see him off campus.

“I saw him in Old Sac from afar once,” Hannah Palmer (’15) says, remembering back to a cold December afternoon. “He didn’t see me though. It was cool.”

But I was able to find him, sitting in the cafeteria at lunch with a few of his pals.

Much to my surprise, Michael was an open book — receptive, responsive, and articulate — erudite and honest in his answers.

Throughout the discussion, I absentmindedly found myself asking him impromptu and occasionally absurd questions because I was so enthralled by his opinions. Our conversation took a few interesting turns, from his preferred breakfast cereal and his opinion on award shows to possible presidential candidates and his ideal new world order. It seems like a type of heresy not to highlight a few of his answers.

“The Golden Globes? Is that the thing when Hollywood pats themselves on the back?” Michael laughs.

Though he had no idea what the Golden Globes are, he had many things to say about our current political state, as he always does.

“Our biggest problem as a civilization is that we are on the mindset of staying on this planet. We need to expand our horizons,” Michael explains in a comfortable tone, head tilted as if gazing into space in deep thought.

“The one little blue jewel in the cosmos isn’t enough. Our economy isn’t as powerful as it was in the Industrial Revolution. We need something else like that to restore the ingenuity.”

Is Michael suggesting that he wants an industrial apocalypse? A Blade Runner-esque odyssey to some other planet? I can’t answer these questions. But reveling in the mystery of his responses was half the enjoyment.

“I like listening to ’40s and ’50s big band music or classical music — contemporary music is okay, but I think it’s all been done.”

Though many of his opinions may seem harsh, outlandish, revolting, or just plain wrong, an air of conviction and unmatched confidence exists when Michael speaks.

He’s incredibly comfortable in his uniqueness, an admirable trait he possesses in excess. And in retrospect, I’d be lying if I said I didn’t enjoy our conversation.

Me — a liberal across the spectrum, and Michael — a “conservative capitalist bent on the expansion of man-kind.” I may disagree with them, but that’s the beauty of a good debate.

But the question still remains: are his differing opinions and intense approaches an active choice just to deviate from the norm? The truth may seem that way, but I’m convinced his opinions have more depth than that.

“I just act this way,” Michael shrugs with blissful apathy. “If anyone has problems, good for them. I don’t care.”

Though he enjoys school and “would much rather be here than at home”, Michael has a life outside of the classroom. He enjoys watching movies like The Dirty Dozen, obsessively playing video games, and reading and writing on his spare time.

Michael speaks with bold self-assurance. It’s clear just by how he approached my questions that he has already thought about them before and already has a formulated opinion on the matter.

Michael is undoubtedly a thinker; he enjoys learning about how things work, and reflecting on the macro condition of the world. And above anything else, he’s a questioner, which is exactly what drives his opinions.

So what is the consensus? Is Michael the archetypal hipster of the modern age? Does he know something that we don’t?

Like everyone else, I had a lot of questions, and even after our interview, I still do. Though he doesn’t necessarily fit the standard hipster caricature, he’s comfortably doing everything that everyone isn’t doing. Which, I would argue, makes him the real deal.