Following the March for the Dream, CB students and staff reflect on the legacy of Dr. Martin Luther King Jr. 50 years ago, the world watched as Martin Luther King Jr. turned America on its head, as he preached messages of peace and equality for all. Half a century later, thousands of Sacramento natives braved […]

Following the March for the Dream, CB students and staff reflect on the legacy of Dr. Martin Luther King Jr. 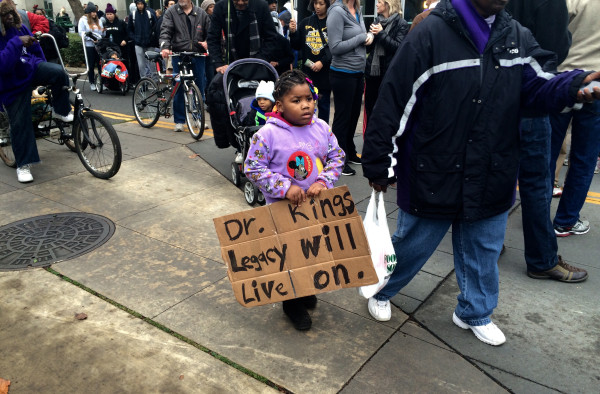 50 years ago, the world watched as Martin Luther King Jr. turned America on its head, as he preached messages of peace and equality for all. Half a century later, thousands of Sacramento natives braved the early-morning cold and mist to march to the State Capitol, keeping the dream of Dr. King alive and well.

The 34th Annual March for the Dream was a raging success, and since it happened right in CB’s backyard at the state capitol, students and staff had their own opinions to share, proving that Martin Luther King Jr. is more to us than just the street name for our school.

According to Carly Mayer (’15), the power in Dr. King’s message is in his promotion of peace.

“Considering that Malcolm X and other revolutionaries of his time were using violence on violence, it was definitely his peaceful protests that made him memorable,” Carly says. “Violence only leads to more violence.”

“Like most social revolutionaries — Jesus and Gandhi for example — he recognized that societal change is needed and that means courage, speaking out, non-violent civil disobedience, a willingness to put yourself out there regardless of the hatred and violence,” she says.

“Martin Luther King was willing to die for change.” 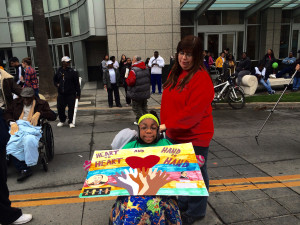 A young girl holds up a handmade sign at the March for the Dream. (photo by Ally Boulas)

The message of Dr. King seems even more poignant in times like these, with racial tension breaking through across the country because of cases like Michael Brown, Eric Garner, a man who was strangled during an illegal chokehold, and Tamir Rice, a twelve-year old boy who was killed by police.

“I think of the parents of Michael Brown and Tamir Rice and the wife of Eric Garner and their deep loss – made all the more difficult because of the violence,” says Ms. Lystrup. “We have to start communicating – talking and listening to diverse perspectives and that means being really present and empathetic to each other.

“But for many it is uncomfortable, difficult, and a little daunting to start the dialogue about race, privilege, and inequality,” she adds.

Although she was unable to attend the march itself, Ms. Lystrup says that “it was good to see citizens in Sacramento come together and remind us all of the good we can do when we stand together.”

According to L.J. Johnson (’15), CB students and administration are successful at keeping to the teachings of Dr. King through their enforcement of the school’s mission.

“I think this campus keeps the messages of Martin Luther King alive through their basic core principles, ‘Inclusive Community’ and ‘Respect for All Persons,'” L.J. says. “I also see it through the willingness to help low-income students go to this school through financial aid.”

L.J. has one suggestion to improve the campus: bring back the Black Student Union.

“The BSU was once a very active and positive voice here at our school,” he adds.

With these plans in mind, it is very possible that in coming years Christian Brothers could have an even bigger presence at events like the March for the Dream, because as Ms. Lystrup said, we are at our best when we stand together.