A huge Giants and 49ers fan, a master quiche baker, and the very embodiment of a Lasallian educator. What else is there to the man that the Christian Brothers community knows as Mr. Schumann? Most people on the CB campus have interacted with Assistant Principal Mr. Rolf Schumann in some way, whether it be from […]

A huge Giants and 49ers fan, a master quiche baker, and the very embodiment of a Lasallian educator. What else is there to the man that the Christian Brothers community knows as Mr. Schumann? 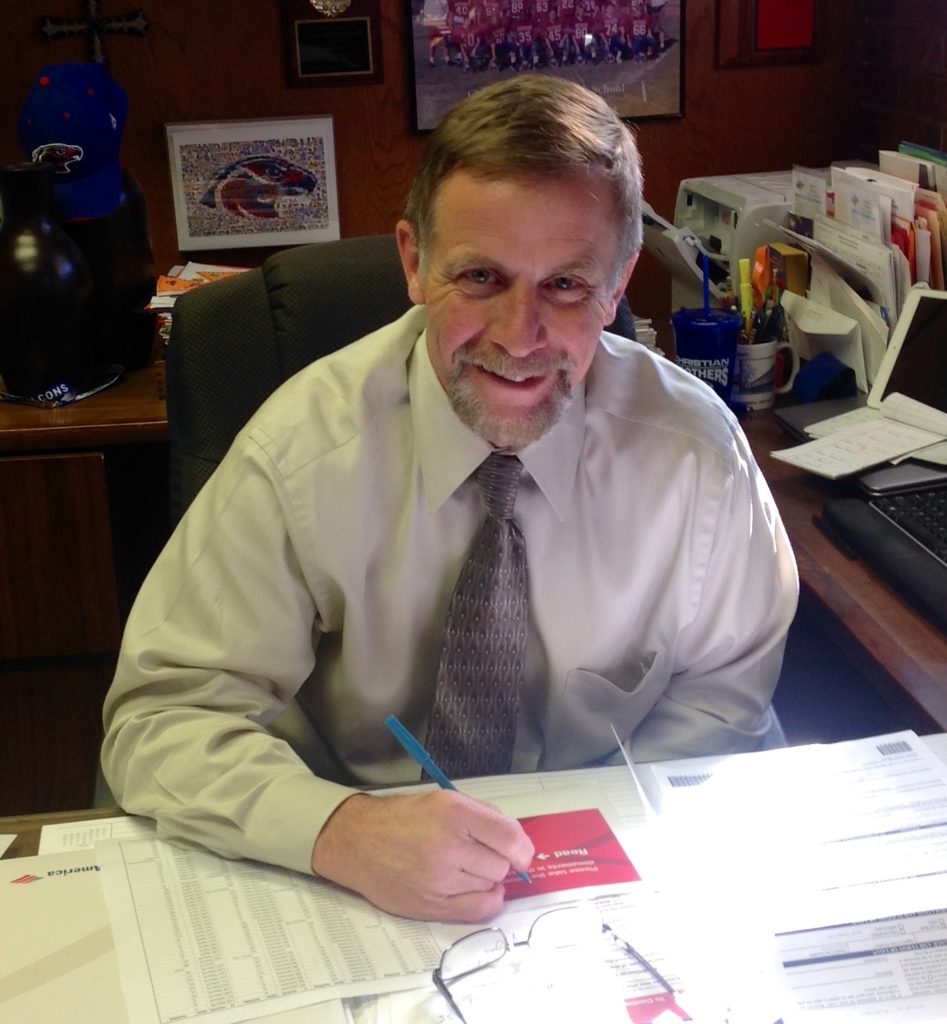 Most people on the CB campus have interacted with Assistant Principal Mr. Rolf Schumann in some way, whether it be from a math class, or in his various duties as assistant principal. But most people don’t know the true man behind the desk.

The image of a big wooden desk in an office, sprawled with papers in front of a wall covered with various Bay Area sports teams posters may come to mind when you think of Mr. Schumann. But he does not just stay in his office all day.

“I’ve always enjoyed math and I especially like teaching the subject,” Schumann says.

He truly believes that interacting with students on a daily basis helps him stay healthy.

“The students keep me young,” he says thoughtfully.

Ms. Janet Warren and Ms. Donna Adam, who have worked with Schumann in the main office for over a decade, know him and his youthful personality and enthusiasm very well from being in the same office.

Mr. Schumann taught Warren’s daughter, but she did not really meet him until they began working together.

Ms. Warren views Schumann as “a role-model for the students because he is very thorough.”

She says that since he has specific guidelines, the students easily respect him and that they have a compatible working relationship.

“As a friend, he is very enjoyable to work with and we can be honest with each other.”

In addition to his positive reputation as a teacher and colleague, he has another reputation — of an excellent cook.

Schumann attended culinary school in Germany between college and getting his job at Christian Brothers and spoils those in his office with delicious quiches as birthday presents.

To Ms. Adam, Mr. Schumann’s best quality is his ability to bake these amazing culinary creations.

She remarks that along with his cooking skills, she also enjoys his sense of humor that he brings to the office, and his “quirky personality traits,” all in the best way.

His positive work ethic and honesty are other traits that make him an ideal colleague.

“But make sure you spell his name correctly otherwise he gets upset,” Ms. Adam warns about Schumann’s very German last name.

Besides this one vice, Schumann is the epitome of the image of a Lasallian educator.

Schumann truly believes that every student who attends Christian Brothers should recieve an exemplary education.

“He is one of those people who is always available to talk to students, whether it’s coaching, attending sports events, or even just reearranging schedules for the students,” Ms. Adam says adeptly. “He’s always there and willing to help.”

But it’s not strictly all hard work.

“If you ever see me and Mr. English together, we’re like two boys,” Schumann shamelessly admits with a smile.

“When we’re not doing something official, there’s a lot of joking and fooling around, especially in practical jokes,” Mr. English remarks, “We tease each other like children.”

But Mr. English makes sure to add that “I am the master at the practical jokes, not him. He owes me and let’s leave it at that.”

It is clear that Schumann has developed a wide variety of relationships with the students and the teachers at Christian Brothers, and he continues to impact the community for the better.