We Need To Talk About Kevin (Van den Bogert)

The popular Christian Brothers physics teacher opens up and tells all (or at least what he’s willing to share). 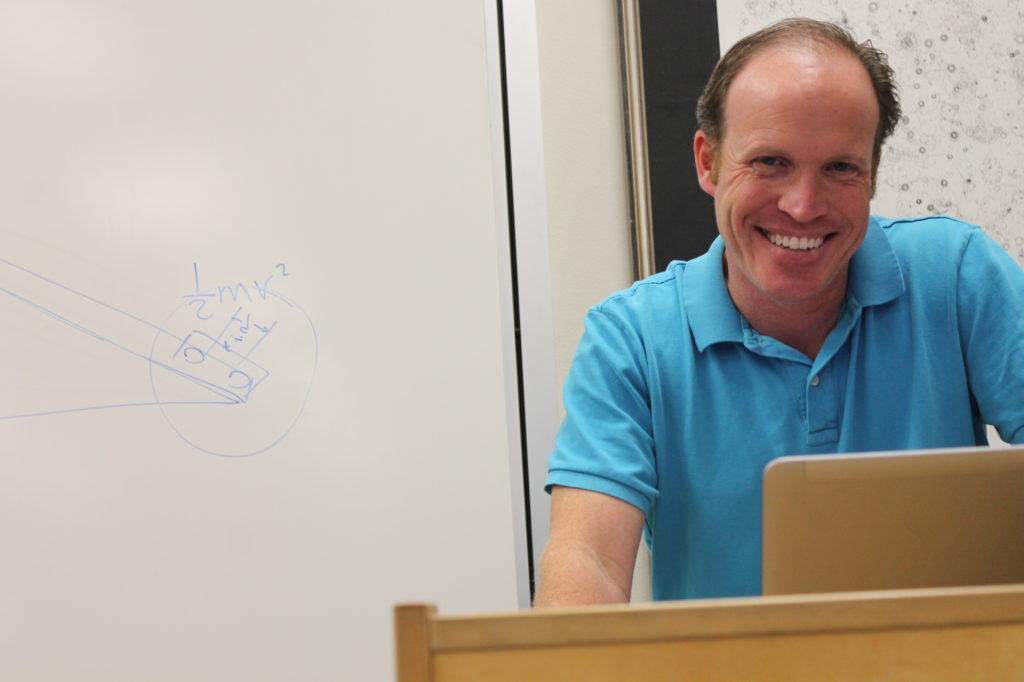 At Christian Brothers High School, there are quirks.

Heck, there are quirks everywhere. Everyday we walk past hundreds of kids and teachers, always near but rarely present to the little things that go on– the way one sophomore always wears the same yellow windbreaker; the way some kids always run to catch an egg bagel during break; or the way a teacher leans on their podium the same way every time they lecture. These habits, our thoughtless acts that don’t really affect other places and people, help define how we approach everything else.

In the case of Mr. Kevin van den Bogert, the physics and engineering teacher with a background in everything from organic chemistry to microprocessing chips, his quirks hint at the constant stream of thoughts racing through his head at the speed of light.

Sometimes at the beginning of class, Mr. Bogert sits at his computer, eyes occasionally glancing around, fingers motioning something no one can see, as he mumbles a problem he’s working out, checking, and re-checking.

It’s something to witness, like an artist vivaciously finishing a painting or a musician gliding their fingers across a piano.

“I think I’m an explorer,” Mr. Bogert shares. “I wanna go out and explore and learn, and so I’ve sought out opportunities to do so.”

Before working for Christian Brothers, Mr. Bogert taught through the Peace Corps, worked in construction engineering, and briefly worked on Intel’s Pentium microprocessor, one of the most widely used, and profitable, computer processors of all time.

Corporate success was never a good fit for Mr. Bogert, though. He worked for Intel for less than two years, opting for careers that spoke more to his drive to create.

“When I went to industry, I wasn’t in a position to express myself the way I wanted to,” remembers the engineering teacher. “Ultimately I found my way into teaching because it does allow me to create, and I do have control over how I present material.”

Behind his desk, Mr. Bogert keeps a massive framed poster of squiggly lines coasting round and round a blank canvas. The frame was a gift, and the poster the result of an experiment done by one of Bogert’s AP Physics classes.

Mr. Bogert asked his class to design spinning tops that would stay in one place. To track their attempts, the students designed the tops around pen tips and released them onto one large, single sheet of paper. They could never get the tops to stay in one place, but the collage of meticulously captured chaotic lines fascinated Mr. Bogert.

When the parents of a student gave him the mammoth gold frame that fit the poster, Mr. Bogert was quick to buy a wall anchor that could support something twice that size, just to be safe.

“I need to be able to create, to invent,”  Mr. Bogert reveals.

So how did Mr. Bogert pass through the heart of American industry before hanging up a piece of student-made art at Christian Brothers High School?

“I grew up with computers,” says the second generation mathematical man.

Mr. Bogert’s father worked at Hewlett-Packard, first as an electronics technician, later a programmer, and then finally a project manager. As Mr. Bogert grew up, his father always brought home computers from HP that were loaned to him.

Bogert would play around with all kinds of different touchscreens, keyboards, and strange prototype computers that never made it to production. It was at this early age that Mr. Bogert was first introduced to computers– and his love for engineering.

So Mr. Bogert went to University of Arizona to get an engineering degree, and in the summer between his Sophomore and Junior years he moved off campus with a few classmates, Sean and Karen.

Mr. Bogert had spent most of his time around other engineering majors, but when he started living with art majors he opened his mind to ways of thinking he never previously considered.

“Karen and I became best friends, but her friends were all artists and musicians and they did things like fight forest fires in the summertime,” Bogert remembers. “By the time I graduated I had a much richer experience to pull from. It was art. It was music. It was a lot of things.”

But today, Mr. Bogert doesn’t have quite the time to feed his passions like he once did. With two kids and a full-time teaching job, Bogert has to balance valuable time between his children and his work. On weeknights he gets to sleep by 1 am or he takes a nap from 10 pm to 2 am, working the rest of the night and through the next day.

“Kids are pretty time consuming,” the sleepy daddy reveals. “My home life revolves around them and their activities.” 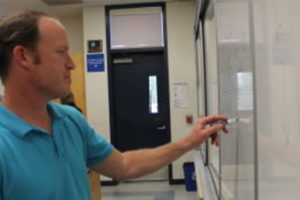 Mr. Bogert works out a problem (and his forearm) at the white board.

And that’s no mistake. Fatherhood is more rewarding a task than any, and even with the demands of a father and educator, Bogert has managed to take on new and ever-exciting projects.

Mr. Bogert has worked at a UC Berkeley Lab for eight week periods over Summer breaks on four separate occasions, working with plasma in the Accelerator and Fusion Research Division (AFRD).

“There I built electron guns and studied how electrons interact with ions moving at very high velocities through particle accelerator machines,” he recalls.

It’s not hard to feel teeny-tiny in the presence of Mr. Bogert. His extensive knowledge of random things and his, quite honestly, awesome life are something to talk about, or write an article about. He’s kind of a legend around campus.

”He knows at least something about everything” says senior Connor Gorry (’15).

He might not know everything, but if it were possible, Mr. Bogert would certainly try.

“You know, you have to want to gain that knowledge and breadth, and experience. You need to seek out that opportunity,” the physics teacher shares. “I do look back, and I always did that.”

Mr. Bogert really can go on about just about anything. He knows how to build houses, computers, make mixed drinks, and shoot film photography. He shares poetry, solves complex math in his head, and does things like accurately guess when the division symbol first appeared.

“I am amazed at the breadth of knowledge I’ve acquired” Mr. Bogert says.

His overwhelming intelligence is just a byproduct of his childlike curiosity, one of his lovable quirks. He thinks the world is exciting, full of wonder, and just bursting at the seems with more to explore. Whatever crazy genius nonsense he tosses out at you, it’s always from this red faced, grinning nerd who just loves every second of it.

“Teaching is a really natural way to share your knowledge” Bogert reminds me. “I much prefer to share and teach than just do something that only I can appreciate.”