The Face Behind the Camera

Meet CB’s hidden gem, Mrs. Kristen McCarthy, a favorite among students school-wide. Many Falcons have experienced the snap of a camera on their journey through Christian Brothers. The swish of blonde hair and a pair of twinkling blue eyes always seem to accompany these encounters, but many don’t know the identity of the woman behind […] 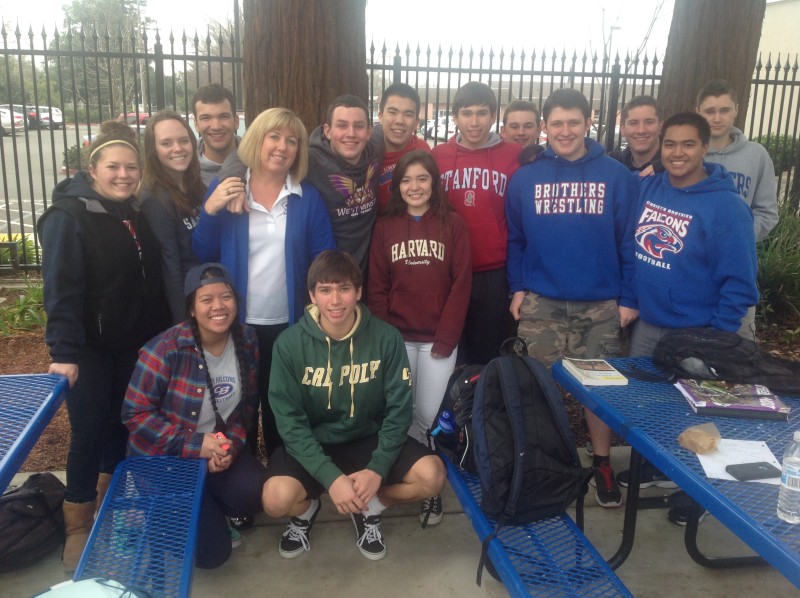 Many Falcons have experienced the snap of a camera on their journey through Christian Brothers. The swish of blonde hair and a pair of twinkling blue eyes always seem to accompany these encounters, but many don’t know the identity of the woman behind the camera.

“I used to call her ‘The Lady Who Takes Pictures At Lunch’,” recalls Erika Robles (’16) with a laugh.

Although many don’t know her intricacies, Mrs. Kristen McCarthy, Director of Communications, is a crucial member of the Christian Brothers staff and a beloved part of student life.

Before she ever became a part of the Christian Brothers staff, Mrs. McCarthy was already having a positive impact on our school. She was a CB mom—her son, Matthew McCarthy (’09), attended at the time, following in his father Mike’s (’80) footsteps—and she was a part of the campaign that brought the dreams of an on-campus field house and theatre to life.

It was while Mrs. McCarthy was working on this project that she realized that “CB is the place to be”, a phrase that she would later coin.

By January 2007—Matt’s sophomore year— Mrs. McCarthy had officially become a part of the community that would impact her life as much as it had her children. She joined the CB staff as the Director of Communications and has become an integral part of the inner workings of the school.

“I do a little bit of everything,” says Mrs. McCarthy. “I work with the admissions team, I work with President Barnes, I prepare the materials that we use when we reach out to prospective students and families, I write the Connection Magazine, I maintain the school’s website, Facebook page, and Twitter account, and I take the pictures that are displayed on monitors throughout the school.”

Many students would groan at this list of things to do, but Mrs. McCarthy approaches the substantial checklist with chipper enthusiasm. It is an understatement to describe her job as “little bits”—the work that Mrs. McCarthy does brings the Christian Brothers community together and characterizes the life of a Falcon.

The picture-taking that has granted Mrs. McCarthy school-wide fame was not a part of her original job description.

“I inherited pictures when Brother Donald Johanson left,” Mrs. McCarthy says. “He was a remarkable photographer. I’m not nearly as gifted, but luckily we have great kids. That makes it much easier.”

Not only is Mrs. McCarthy the Director of Communications at CB, but she also works closely with our Admissions team to promote the Brothers brand.

“When [we the Admissions team] find ourselves in a season that is particularly busy, she comes in and reflects for us the successes that we’re having and the lives that we’re touching,” says Mr. Kenny Kirrene (’78). “Mrs. McCarthy keeps us motivated and encouraged when we are low on energy.”

Mrs. McCarthy’s positivity is a great attribute. Being in the same room as this remarkable woman is invigorating– her energy is contagious. Her humor can help a derailed day get back on track, and her positive attitude helps people to attack their work with renewed vigor.

“She is an enthusiastic, witty, and humorous spirit,” Mr. Kirrene says with a smile.

Mrs. McCarthy also brings know-how to the equation. As a St. Francis graduate and a mother of three, she “provides wisdom and insights to make [the Christian Brothers] brand unique,” according to Mr. Kirrene.

In working with the Admissions team, Mrs. McCarthy communicates within and outside of the Christian Brothers community. She markets and protects the Brothers brand that is unique to our school and helps to introduce and communicate about Christian Brothers in a way that is consistent with the school’s five core principles.

She nurtures and communicates with those who are interested in and those who have joined our school community.

“She works closely with us from the initial stage to the final stage [of admissions],” says Mr. Kirrene.

Mrs. McCarthy becomes a part of every student’s life from their first shadow visit to their last photos at graduation.

“You guys give me something to brag about every day,” Mrs. McCarthy says, “And that is by far the best part of my job.”

Mrs. McCarthy is certainly a positive force in the lives of many. She always manages to draw a smile out of those who she interacts with, and everyone loves her humor. Mrs. McCarthy is especially loved among the students whom she takes photos of.

“When I first met her, I thought she was nice and funny, and generally an amazing person,” says Molly Hallsten (’16). “Now, I think she’s even more amazing.”

Erika Robles agrees, delight clear in her voice as she says, “She’s so funny! I love her!”

“I met Mrs. McCarthy at freshman lock-in,” says Elizabeth Robinson (’16). “She had a camera—and a Daniel behind her.”

Elizabeth refers to her classmate, Daniel McCarthy (’16), who is Mrs. McCarthy’s youngest son and a current CB student. 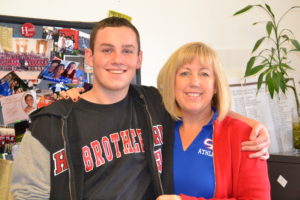 Daniel McCarthy ’16 enjoys having his mom around campus.

Many of his peers would shudder at the thought of having a parent work at their school. However, Daniel says “it’s definitely a plus to have my mom at school.”

Mrs. McCarthy says that she, too, “feel[s] really lucky to share a part of [her son’s] high school experience that most parents don’t.”

Mrs. McCarthy and Daniel agree that her presence at CB is very convenient.

Everyone hits a day in their high school experience when they forget their lunch or their lunch money. Some students starve. Others mooch off of their friends. But Daniel has options.

“I can get food or money from her office when I forget my Sogo card,” Daniel says. “I can also print things in her office and if I forget something… she’s always there.”

As a CB athlete who is on the wrestling and football teams, this boy needs sustenance to support his growth and athletics.

“Daniel is happy to have easy access to snacks,” Mrs. McCarthy says with a laugh.

Still, many students would fear their parent’s easy access to their private lives, their lives within the classroom, and their lives at school.

Daniel is proud to say that having his mom around is “not too bad because she doesn’t pry.”

Teachers aren’t too hard on him, either, because “a lot of them don’t know that [Mrs. McCarthy] is [Daniel’s] mother.”

Mrs. McCarthy is able to resist the temptation that many parents would not be able to; she gives Daniel his space and privacy even when she has the opportunity to intervene.

Mrs. McCarthy has grown to be more than just a mother to her own child.

Josh has known the McCarthy’s since kindergarten. Growing up with Daniel, Mrs. McCarthy became a second mother to him and his twin brother, Benjamin Brouwer (’16). The three boys– Daniel, Josh, and Ben– have even come to be known as the Triplets.

“I think that Mrs. McCarthy embodies CB’s philosophy and core principles,” says Ben. “She is generous, kind, always willing to lend a helping hand, has a great sense of humor, and is a great singer on the car trips home from practices.”

Ben also says, “She is more than a family friend; she is like a second mother to me.”

The twins are just one example of the many students who look up to and love Mrs. McCarthy. For many students, she is a part of the family that they have formed at CB. Friends become as close as siblings, and adults who are reliable and kind like Mrs. McCarthy become something akin to parents.

Mrs. McCarthy is a moving force in the lives of many. She is able to relate to a huge range of people, whether they are students, staff, parents, or others. Her humor and her ability to touch the hearts of those around her make her an endearing and phenomenal member of the CB community now, and for years to come.