Christian Brothers students don’t have to go far in their search to fulfill the mission of “Enter to learn, leave to serve.” To an outsider, the Oak Park community may seem like a less than ideal place for a school, as the neighborhood has had its economic and social ups and downs throughout the years. […]

Christian Brothers students don’t have to go far in their search to fulfill the mission of “Enter to learn, leave to serve.” 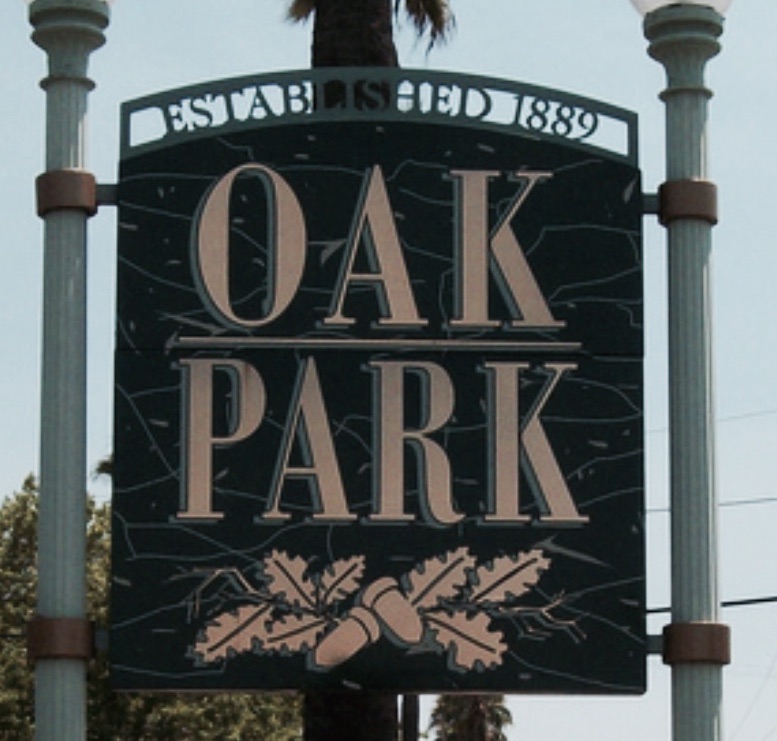 To an outsider, the Oak Park community may seem like a less than ideal place for a school, as the neighborhood has had its economic and social ups and downs throughout the years. To anybody involved with Christian Brothers, however, the response is very different.

Alsip had a unique vision for a new real estate subdivision which focused on the land outside of city limits of the time. He ultimately wanted to divide up the land of the Doyle ranch into small lots which the working class would be able to afford. The promise of an electric street railway for transportation from Sacramento to this new suburban location was an irresistible temptation to many potential buyers.

With Sacramento’s large working class, Edwin Alsip’s plan to sell housing to workers was a success.

Alsip divided the Doyle property into fifty-six blocks, and the appealing promises of no city taxes lured the people in.

The community of Oak Park grew rapidly in the early 1900s with the arrival of a popular theme park Joyland. Many new businesses and people joined the community as the years passed and the neighborhood continued to develop.

Oak Park has a bountiful and intricate history has gone through good times and bad from the time of its creation to the present day.

A vibrant and developing neighborhood, Oak Park has opened a floodgate of opportunities to Christian Brothers High School in terms of service. Without the presence of Oak Park, the fortunes bestowed upon members of the CB community would not be able to be as greatly appreciated. 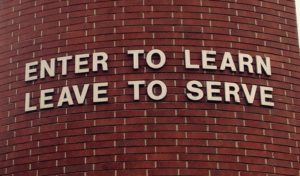 The mission statement of the Christian Brothers community clearly marks the entrance to the school.

Mr. Danny Delgado ’79 has first hand experience as a teacher, coach, and student of Christian Brothers High School. He remembers that as a student, the service aspect of the school was focused more on the school than on the surrounding community. Mr. Delgado recalls that since he was on financial aid, a lot of his work was geared towards the school such as answering phones.

Since Mr. Delgado was able to attend this high school as a student because of the help of financial aid, he has even more reason to be grateful to have attended Christian Brothers.

“There are a lot more service opportunities for students now than there were when I was going here,” he says. “There is now a lot more student involvement in the community.”

One such opportunity in which he takes part is the Wellspring Women and Children’s Center breakfast. Mr. Delgado is one of the brave souls who gets up early and arrives to school at 6:00 A.M. on Fridays in order to serve the less fortunate.

Direct service such as Wellspring, Oak Park cleanup, and tutoring have really cropped up in recent years as the school continues its outreach to embrace the neighborhood.

“This outreach that we do has a positive impact on how the community views us,” Mr. Delgado says.

Christian Brothers has managed to become an intricate part in continuously building up the Oak Park community. Instead of remaining a separate and isolated community, this high school reached out to be readily integrated in the surrounding neighborhood.

In the mission of leaving to serve, Christian Brothers opted to stay in Oak Park after given the chance to move to a different location about 25 years ago.

According to Mr. Delgado, most of the members of Christian Brothers wanted to stay in Oak Park, rather than move to a new site in the Natomas area. He thinks it would have been a “slap in the face to the Oak Park community to leave them to go to a higher income area.”

In addition, Mr. Delgado says the location of Christian Brothers is part of the identity and mission of the school.

“It would not be home unless we remained in Oak Park,” the science instructor says.

Ms. McCarthy thinks that Christian Brothers has established a nice partnership with the Oak Park community and that there is definitely a level of respect and appreciation that goes both ways.

Along with Mr. Delgado, Ms. McCarthy believes that if the school had been moved to a different location, it really wouldn’t be fulfilling its mission of service to others.

“The students are lucky that they can engage in meaningful service right when they walk outside,” she explains.

She recalls that when her son Matthew McCarthy ’09 attended Christian Brothers, he tutored at Oak Ridge Elementary School four times a week because they had a buddy program there.

“I think that the tutoring changed his life and his perspective of the world and how different people live their life,” the Director of Communications says. “[His tutoring] really fostered a sense of appreciation for the kids at Oak Ridge, as well as for his own life.”

The motto of service even followed Matt to college on the east coast where he chose to continue tutoring at a different school.

“I think it’s important for our kids to be here, we’re here for a reason, and we’re proud to be here,” Mrs. McCarthy boasts with a smile.

As Director of Admissions for CB, Mr. Kenny Kirrene ’78  has similar views.

“Oak Park is still a developing urban community, and service helps that along,” he says.

His views that the community has benefited from Christian Brothers’ presence is confirmed by stories of enthusiastic response from the community to the students. One example he provides is when the freshman religion classes walk to the Sacramento Food Bank. They are given the opportunity not only to serve, but also to walk through Oak Park and be offered a glimpse of its rich and complex history.

Not only has outside service extended, other avenues of help such as more financial assistance have also flourished. A huge percentage of the CB community would be unable to attend if not for financial aid. Mr. Kirrene brings up this point with pride and refers to the school as an “oasis”.

Mr. Kirrene recalls a former student’s description of Christian Brothers: yhis student was aware that the outside community was still developing, but felt that the school always had the feeling of an oasis and a welcoming community to students and to the outside neighborhood alike.

A prime example of the willingness of the students is shown through Anysia Lee (’16). Only a junior, Anysia already has a staggering amount of 500 service hours. She is a part of Lasallian Youth, a program that Christian Brothers takes part in to benefit the outside community.

The members of this group go to the partner elementary schools such as St. Robert in Hollywood Park and help to tutor the younger kids in return for service hours and a sense of accomplishment.

Anysia is very grateful for this service opportunity, because it gives her the chance to give back to the local community.

“It helps kids struggling in school who are less fortunate than me,” she says. “It also makes me feel good about helping others, which gives me satisfaction”.

Lee uses her knowledge and what she has learned to help kids who are struggling.

“Being in Oak Park motivates me to do service and help out the community,” the junior adds.

Ms. Jennifer Lystrup, the Director of Christian Service, Religious Studies Department has also watched the school develop along with the surrounding community.

“The mutual understanding of each other’s organizations is what keeps the ‘enter to learn, leave to serve’ mission solid and robust,” Ms. Lystrup says.

The two communities have a reciprocated outreach which ends up being beneficial to all who are involved. As the years have passed, Oak Park and Christian Brothers have become even more entwined and inseparable in their dependence on one another.

The Oak Park community has had a long road of changing circumstances which have contributed to it’s history. The neighborhood embarked upon their latest chapter with the arrival of Christian Brothers High School in 1956.

The two communities have worked together ever since to continuously build each other up. Both are dependent on each other and neither would be complete without the presence of the other.