You are here: Home \ Community \ Falcon Features \ Featured Posts \ No Such Thing As A Free Lunch
Community
0

No Such Thing As A Free Lunch

A classic economic adage is embodied in the CB Cafeteria. Among the first lessons of any introductory economics course is the deconstruction of the famous adage that “There is no such thing as a free lunch”. The phrase challenges aspiring businessmen and women with somewhat of a paradoxical question: Is something that comes at no monetary cost […]

A classic economic adage is embodied in the CB Cafeteria. 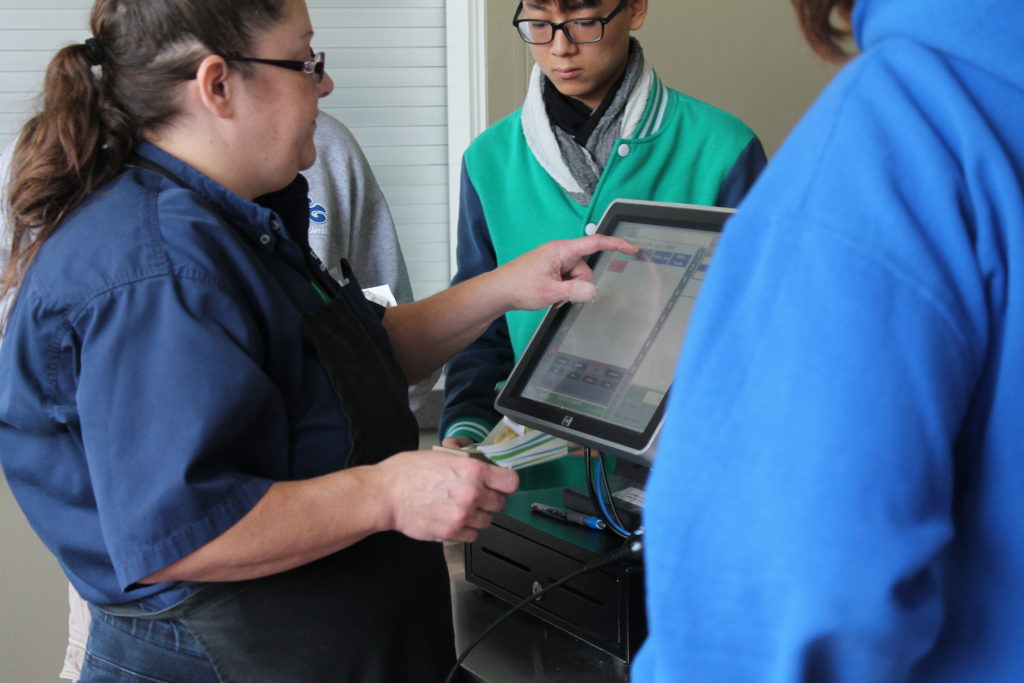 Among the first lessons of any introductory economics course is the deconstruction of the famous adage that “There is no such thing as a free lunch”.

The phrase challenges aspiring businessmen and women with somewhat of a paradoxical question: Is something that comes at no monetary cost — a free lunch — actually free? The answer, as students quickly discover, is a resounding “no”.

In essence, the solution has two answers.

Firstly, while the gift of a free lunch might initially seem like a bargain, there are almost always other costs attached.

Historically, the practice began as an incentive to get consumers to simply buy more, offering a little for free in the hopes of a larger profit.

Second, the far simpler yet more abstract reality comes in the form of opportunity cost — a loss of potential gains due wasted time or effort. For example, if someone takes an hour off work to get their free lunch special, he or she is still losing the money that they could have earned in the meantime.

But how do these broad-scale and frankly hypothetical economic questions apply to Christian Brothers High School students?

Well, as all students undoubtedly know, there really is no such thing as a free lunch, regardless as to whether one brings a lunch from home, or purchases one from the cafeteria.

It is no secret that the cafeteria is a fairly divisive construct, one which inherently splits students into two factions: Those who bring and those who buy.

Each side has some fairly obvious pros and cons: Buying food at the cafeteria has the benefit of convenience, at the cost of a higher price; Bringing lunch from home, however, requires more effort on the part of the consumer.

Of the handful of people that I talked to in the lengthy line for food at the cafeteria on an all-school lunch day, all had fairly similar reasons for their choice of buying food at school, rather than bringing it from home.

“I buy lunch here out of necessity,” says senior Inigo Nazareno (’15), who claims that he simply can’t find the time to make a lunch.

One student, who wished to remain anonymous, took a more honest approach, admitting that he was simply “too lazy” to make a lunch in the morning.

“If I lived closer to school [and had more time in the morning] then I’d make my own lunch”, adds frequent cafeteria consumer Saihej Basra (‘15), citing convenience as his ultimate reason for not bringing his own lunch.

When asked about any disadvantages to buying food at the cafeteria, the long-distance commuter put things fairly concisely: “Well, it’s pretty expensive,” he stated, putting on a downcast look.

Saihej’s conundrum was not an uncommon one. In fact, every student that I talked to seemed to have the same two key reasons for liking and for disliking the cafeteria, each one praising it for its convenience, yet wishing that its food wasn’t quite so expensive.

And that’s the classic trade-off. In spite of what it might seem, the cafeteria doesn’t really sell food, it sells convenience. Sure, bringing food from home costs less, but it’s the extra degree of effort and time that a business like the school cafeteria can alleviate.

Which brings us to the next pressing economic questions: “Why are the prices where they are?” and “Where does all the money go?”

The latter question is actually the far easier of the two. As stated before, the cafeteria is more of a service than a store — it’s closer to a restaurant than to a supermarket. The extra cost of the food on the consumer’s end is spread out on the supplier’s end between the cost of the food itself, as well as paying the cooks and cashiers.

Simply put, there are far more costs involved when catering to a school full of hungry teenagers than in preparing a midday meal for one.

The question as to why prices are set where they are — relatively high for the tastes of most CB students — is a far deeper one.

The first instinct of many cafeteria shoppers is to simply blame the organization behind the curtain.

Sodexo, CB’s current cafeteria affiliate, reported a revenue €18.4 billion, or $22.7 billion, in the 2013 fiscal year (Sodexo Press Release), earning roughly 38% of its revenues in North America and another 45% in Europe and the UK. (An important distinction: These are revenues — total earnings — NOT profits)

Hearing numbers like these, it is easy to point the finger at Sodexo, painting it as a greedy corporate entity that preys on hungry school-children.

However, if the first lesson of Economics is that “There is no such thing as a free lunch”, then the second is the pivotal Law of Equilibrium.

In essence, the Law of Equilibrium creates an invisible line — an unspoken agreement — between the supplier and the consumer, that so long as prices do not rise above a certain point, the buyer will continue to buy, and the provider will continue to provide.

“Through trial and error they [supplier and customer] come to an equilibrium between supply and demand,” explains CB’s resident economics teacher Mr. David Desmond (’94). By doing this, they come to what he describes as “The perfect price,” a middle ground in the proverbial game of supply and demand tug-of-war.

Is it the perfect price, either for students or for Sodexo? In a word, no.

As reported, many students wish that cafeteria prices were lower, and if I were to make a guess, I would imagine that Sodexo wouldn’t mind a little extra profit either.

Perhaps a better way to sum it up would be a compromise, in which this perfect price is really a window within which both the consumer and the supplier are happy. 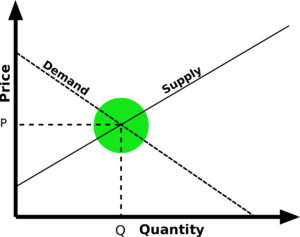 A visualization of the Law of Equilibrium in economics.

In this visualization, the vertical axis symbolizes price, the horizontal demand, and the green circle the “perfect price” window. As price goes up, demand goes down, and vice-versa, making this window the perfect balance between the two.

“On a macro level, that’s how [all] prices are determined,” Mr. Desmond explains.

As with everything in economics, the macro — characterized by the broad patterns of worldwide trade — trickles down to the micro — small exchanges, such as money for lunch.

By finding an ideal balance between the two, a supplier ensures that it will make the largest profit possible based on revenue per sale while ensuring that sales regularly occur.

Sodexo could, in theory, choose to sell a sandwich for $100, but for obvious reasons there would be little to no demand for that product at that price-point. On the other hand, they could sell a sandwich for $1, likely ensuring a large amount of sales, at the cost of profit per unit. Either way, the company doesn’t make money.

The current price-point is, as you’ve probably guessed, a balance between the two. And while students may often vocalize their opinion that the price of food is “Too expensive”, it is really set at the exact point where they want it — or, at least, where their spending has said that they want it.

“You can’t really say if the food is ‘too expensive’ if there’s no real competition,” Mr. Desmond expands, “The cafeteria has a monopoly on convenience”.

“[If I was] a financial advisor, I’d say that there are more efficient ways to spend your money [than at the school cafeteria],” he hypothesizes, “But don’t go labeling me as an opponent of the cafeteria… It’s much better now than when I went to school here!”

You get what you pay for, and that’s the real crux of the issue.

The cafeteria, regardless of its relatively high prices, is a worthwhile way to get one’s lunch. Sure, the food costs more than bringing a lunch from home, but the extra monetary cost serves to alleviate the opportunity cost of taking the time to make a lunch on a hectic school-day morning. A student pays more in exchange for better food, quality service, and above all, for their own convenience.

So what have we learned from today’s brief, broad, and hopefully enlightening economics lesson?

Whether you’re a frugal brown-bagger or a cafeteria big-shot, there is no wrong answer. Either way, there are cost involved, whether they be in the form of money, or in time and effort.

But regardless of what route you may choose, or if you switch between the two occasionally, if there is one lesson that I hope that you, the reader, will take away from this article, it is that no matter what way you cut it, there truly is no such thing as a free lunch.