Female students and teachers in STEM have already broken ground in their field — now it’s time to break more barriers. The STEM fields (the current short-hand for science, technology, engineering, and math) are essential to the betterment of society and the progress of America. However, it’s obvious that women are overwhelmingly underrepresented in these […]

Female students and teachers in STEM have already broken ground in their field — now it’s time to break more barriers. 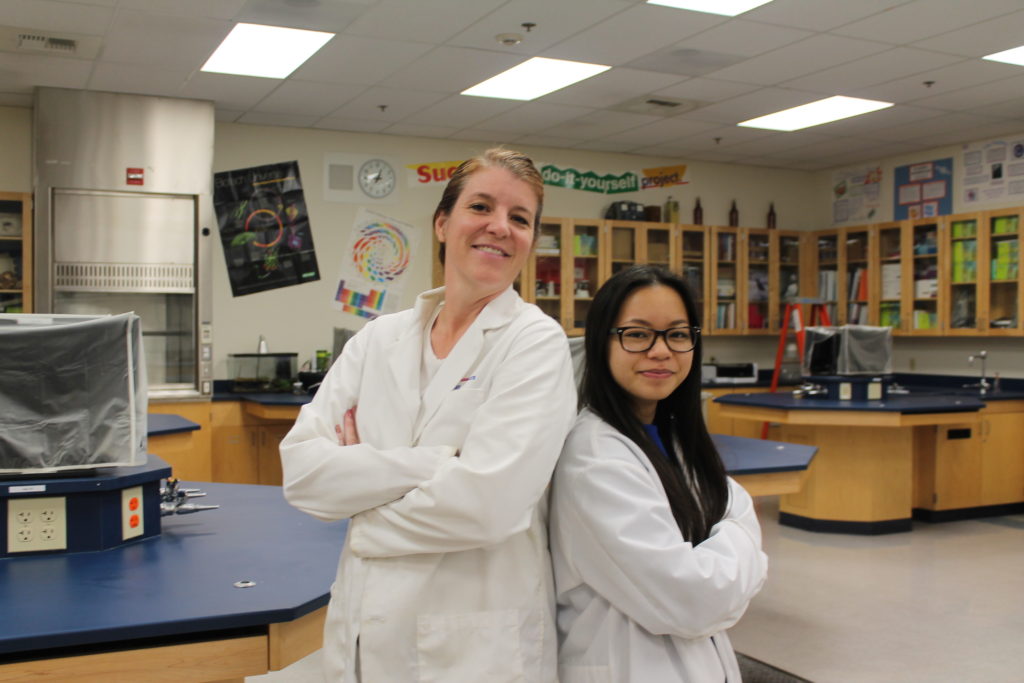 The STEM fields (the current short-hand for science, technology, engineering, and math) are essential to the betterment of society and the progress of America. However, it’s obvious that women are overwhelmingly underrepresented in these fields.

I originally became fascinated with the role women play in STEM fields because, as far as I’m concerned, I’m not a part of this growing group nor will I ever be. But it doesn’t take an expert to notice that media has been focusing in on women in STEM, and particularly the glaring gender gap that exists in these fields.

Mrs. Thayer got her degree in mechanical engineering from Cal Poly, and has since been an advocate for opening up young minds to the world of science.

“It wasn’t uncommon for me to be the only woman in my science classes in college,” tells Mrs. Chris Thayer.  “You certainly stand out as a girl.”

She was raised to be “self-supportive without any limitations.”

Mrs. Thayer now teaches Physics — the most underrepresented branch of science for women.

We all know that women lag behind men in all these fields–and the issue is more important than just a parity of numbers, and the looming question of what is keeping qualified women out of the STEM field has become a deep concern. But despite their lack of representation, something is clearly keeping a growing number of women interested in these fields.

The very reason that steers girls away from pursuing a career in STEM–the gender ratio–is exactly what encouraged Mrs. Brousseau to get her degree in Biology.

Though her original plan was to major in automotive engineering, she wound up getting a degree in Biology with a Chemistry minor.

“I originally decided to major in science because at the time, I wanted to be a dentist,” she explains.

“I was sitting in a chemistry class and I was trying to think of what to do and I thought ‘what about a dentist?’ And then I thought ‘no, women aren’t dentists,'” she recalls. “This thought really stopped me…I had never seen a woman dentist before. And when that thought popped in my head it shocked me that I actually didn’t consider doing a career because I thought that wasn’t a job women did,” explains Mrs. Brousseau.

Inhibited by her intrigue,  Mrs. Brousseau went on to pursue a career in science anyway.

“But a really good way of getting me to do something is telling me I can’t do it,” she continues, “So I thought, right then and there, that I would do it!”

Mrs. Brousseau and Mrs. Thayer certainly aren’t the only success stories — and it’s women like them who inspire young girls to pursue a field in STEM despite the challenges that may ensue along the way.

Now a senior mapping out her plans for college, Maddie Nicolas’ (’15) discovery that she wants to pursue a degree in a STEM field was almost serendipitous. As a budding artist with a keen sense of fashion and a fondness for reading cool blogs, she plans on incorporating her love of art into computer science.

Her new found love for computer science has since fueled her interest in coding for software and apps.

“I went on a summer programming and java class and it was SO much fun. We learned how to code the fundamentals of Java and did projects. It was way more fun than I could have ever thought it would be,” she excitedly explains. “That really cemented my interest.”

Of course, as Maddie explained her experience at Java camp, she made clear the discrepancy which existed between the genders. In a class of eight, she was the only girl. But like Ms. Brousseau and Mrs. Thayer, she wasn’t bothered by the skewed ratio.

“That’s how you change things – you represent!” Maddie concludes. 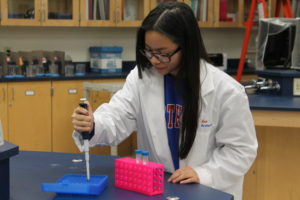 CB’s own new Engineering program has worked to welcome, encourage, and prepare young women who are interested in pursuing a degree and career in Science, Math, Engineering, or Technology.

Like Maddie, Regina Chapuis (’18) has also taken an interest in Computer Science, involving some other kind of creative process such as graphic design and video game programming.

“I really like the Pathway to Engineering Program,” Regina shares. “It involves a completely different level of thinking to solve problems compared with my other classes.”

But it may not come to a surprise that out of about 20 students, Regina is one of four girls in her class.

“The ratio is very skewed. On one level, there’s not a lot of people pushing girls to consider engineering.”

Regina also articulates a whole different side of what may be going on in the STEM field for women — “There’s a lot of pressure and competition in the real world in this field for women. . .It’s a bit irritating in a real world situation that females would have to work harder for recognition. And on the other hand, there are people who would hire girls just to say that they hire girls, and not have them do any real work. I’m not bothered by it though because I believe I can do the work just as good as anyone can. There’s no real difference in [men and women’s] mental capacities.”

A common explanation for why this gender gap exists in the first place is that girls just aren’t interested in these fields. This may be true on an individual basis, but after researching these fields more and talking to Christian Brothers teachers and students, it became clear to me that it’s much more complicated than that.

Perhaps because girls are so underrepresented, it subconsciously perpetuates a disinterest within girls. It’s a matter of psychology. You see no potential, you’re driven away from it, and the interest dies.

But much of the skewed ratio is also an issue of cultural norm. The status quo of the male dominated field has paved a rocky road for women, and when the structure has existed for so long, it’s sometimes hard to realize there is another quo at all.

Young girls don’t have many female scientist role models to look up to. And the new Barbie Engineer Doll that, no surprise, needs her Ken doll to assist her, only fuels these cultural norms. We all, men and women, have grown up in a society in which we absorb images of scientists as culturally ingrained caricatures — the geeky male misfits, the graduate student isolated in a lab, the Mark Zuckerburgs of the Silicon Valley– and these images have caused an even further disinterest in STEM.

It’s hard to move beyond these long held preconceptions when that’s all society has known.

And as various studies have demonstrated, success in math and the sciences, far from being a matter of gender, is almost entirely dependent on culture — a culture that teaches girls math isn’t cool and no one will date them if they excel in physics. A culture that says math and science is too hard. And mostly, a culture that says science is linear, and only men think linearly.

When women design new products or services, they bring a different perspective that too often hasn’t been considered before. That’s true in any industry, but it’s particularly notable in the fields of science, technology, engineering and mathematics. As more women enter the fields of STEM, we are seeing the difference a women’s perspective makes — a perspective we haven’t yet seen.

But I think the more important question to ask than ‘why does the gap exist?’ is ‘how do we go about fixing it?’

Women and girls need help in overcoming the barriers: Along with CB’s new Engineering program for freshman, The San Diego Science Alliance, for instance, is doing great work through its BE WiSE program, which encourages 7th and 8th grade girls to pursue STEM careers. We need more institutions, employers, nonprofits and policymakers to do the same.

Not to mention, society has a distorted understanding of what STEM really is– it involves more than just inherent skills in math and science. It involves creativity, passion, and a knack for inquiry. It involves the ability to analyze and question. And it’s when society begins to discount these skills needed for the field that girls become uninterested.

As aforementioned, we need to break the cultural stigma. Let’s do our part to encourage young women in STEM by giving them role models, information, and platforms for discussion. They need to be told that their perspectives are vital for the disintegration of the gender gap which treatments the betterment of society. Perhaps then the new generation of girls, like Maddie and Regina, will face less challenges.