You are here: Home \ Falcon Sports \ Featured Posts \ Brothers On & Off The Field
Falcon Sports
0

Brothers On & Off The Field

Football season may be over, but the gridiron bond between Jalen Swanigan and Jamarri Jackson is only getting stronger. While everyone hears about Jalen Swanigan’s (’15) impact on the football field, not everyone gets to witness his impact on his teammates. One teammate in particular who he has impacted is sophomore Jamarri Jackson (’17) — they have […]

Football season may be over, but the gridiron bond between Jalen Swanigan and Jamarri Jackson is only getting stronger. 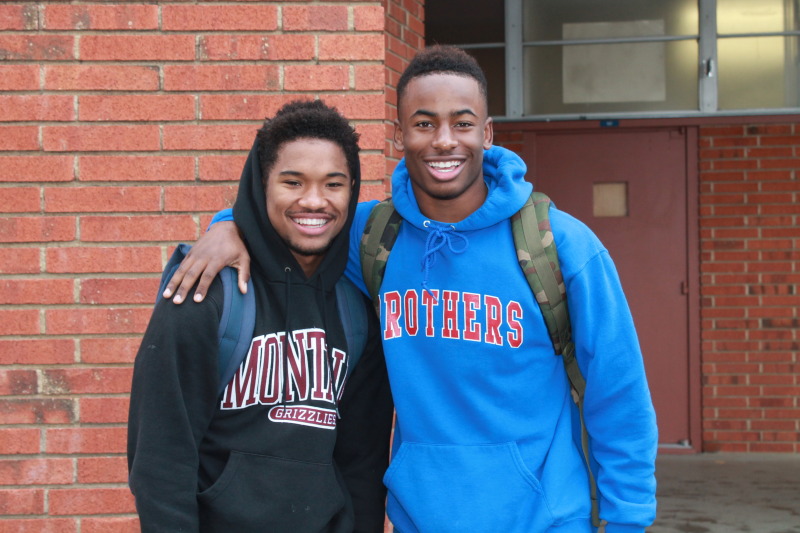 While everyone hears about Jalen Swanigan’s (’15) impact on the football field, not everyone gets to witness his impact on his teammates. One teammate in particular who he has impacted is sophomore Jamarri Jackson (’17) — they have a bond stronger than most. While there are BFFs and bromances, none of those can measure up to the bond between these two. What they have is closer to family.

Both players see themselves as brothers and it’s a bond even the coaches notice.

Together and individually, Jalen and Jamarri are a strength for the team. Jalen Swanigan is a well-known name at CB. His skill on the football field and charismatic personality hasn’t gone unnoticed in his four years.

When Jamarri was asked about Jalen, he replied wistfully.

“Jalen Swanigan, I could go on forever,” the sophomore says in awe.

Jalen’s skill is a combination of his natural talent and his dedication to the sport he’s been playing for 12 years and is still getting better each day. He has worked hard on the field and in track to be the best athlete he can. His effort has paid off and he has made an impression.

“I’ve been impressed and proud of all he’s done to get better,” Coach Carmazzi says. “He’s not short of words. He plays with a lot of enthusiasm a lot of energy a lot of emotion and that’s good we need that.”

“He has like so much drive that either what he does will be something great because of how much drive he has to be a great person,” adds Jamarri.

Jalen and Jamarri played on the same team years ago as Sacramento Raiders. Football is what brought them together once again when they came to Christian Brothers.

“[Playing together] meant a lot especially because it was his last year before college,” Jamarri explains. “He just kind of took me under his wing and it all worked out.”

Jalen reciprocates the importance of being able to play football with Jamarri.

“Football with him was much needed,” the senior explains. “It’s just really something you can’t really explain. When you got a brother on the field with you it’s different.”

Now, Jamarri’s talent is something to take notice of as well.

“Jamarri had a fantastic sophomore year, one of the best sophomore years I’ve seen at any school,” Coach Carmazzi says. “Offensively, defensively he’s made plays all year. He’s an exciting player to watch.”

Jamarri has worked hard since his Pee-Wee football years to become better at his passion. It shows through his seasons with CB and he hopes to continue improving using what Jalen has taught him.

“As an athlete if I’m doing something wrong, he’ll always correct me, he’ll never tell me anything bad,” Jamarri shares.

Jalen has become aware of his influence on Jamarri.

“I know that he looks up to me and asks me for advice and it has helped me grow as a leader,” Jalen claims.

It has definitely paid off and Jamarri has learned plenty to continue to help him improve. Even once graduation comes around, Jalen’s lessons will not be forgotten.

“I will use everything that he has taught me to my advantage to be good,” promises the sophomore.