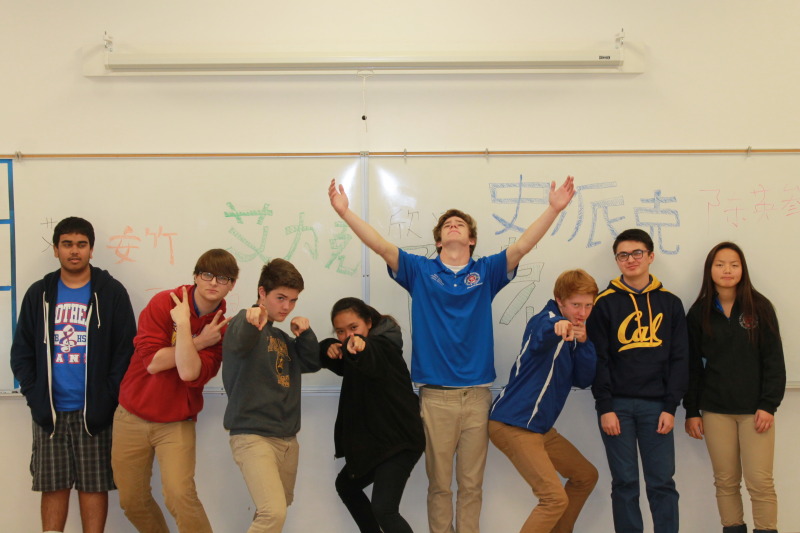 Christian Brothers’ first Mandarin class has entered its third year in the language department’s transition from offering German to Chinese. The star students of the first Mandarin class have undertaken an unprecedented task in the CB community and have secured two years of essential groundwork to prepare them for language classes for years to come.

To some, taking a class in uncharted territory might be daunting. However, Mandarin at CB students saw the benefits of taking the class before they even entered the school.

“I had taken Spanish for nine years in elementary school, so Spanish was definitely the safest choice,” Andrew Warner (’16) says, recalling his decision. “But I thought Mandarin sounded interesting, so I figured I would try it out.”

While interest was enough to draw Andrew to the class, Alec Sieving (’16) “chose to take Chinese because it is a once in a lifetime opportunity.”

With two years of experience under their belts, the two boys are pleased with their decision.

Andrew thinks that it’s “fun to look at how similar [English and Mandarin], which are often considered to be extremely different, are.”

The differences in the Chinese and English languages might seem hard to contend with. Unlike many languages around the world, Chinese uses symbolic language instead of an alphabet, and is not derived from Romance languages like Spanish, German, and Portuguese.

“It’s definitely difficult, and it takes a long time to get a character down really well — I still have trouble writing my name sometimes!” says Andrew. “But it’s really cool, because each character has a little piece of history behind it.”

“Remembering every stroke for every character is definitely a challenge,” Alec agrees. “But it is not overwhelming.”

All of their learning would be impossible without the help of Mr. Steve Liu, or Liu Laoshi (Teacher Liu), who is a college teacher as well as our school’s first Mandarin teacher.

“I love how small our class is, and how one-on-one Liu Laoshi’s teaching approach is,” Alec says.

Mr. Liu has been able to connect English and Mandarin in a comprehensive manner for his students. He relates to his students on a personal level and pushes them to work hard.

With the many foreign exchange students at CB, Andrew says that, “it’s not all that uncommon to run into a group of people speaking Mandarin, and it feels really cool to be able to understand them, even if they’re only saying something simple.”

As a college teacher, Mr. Liu’s teaching style has had to evolve to fit a high school environment.

College Mandarin courses are very rigorous, and Mr. Liu expects his students to perform to their full potential. He sees high school as a transition into college and takes the youth of his students into account.

“In college, if you’re late, you’re late. You have to take 100% responsibility,” he says seriously. “But in high school, students can make up work, and it’s important to give them that chance.”

Despite his strict rules in the college classroom, it was in college that Mr. Liu’s love for language and teaching was born. He worked part time at the language center during his college career.

“That’s what opened the window of my career and when I decided to teach languages,” he says.

Although he’s used to dealing with adults in a college setting, Mr. Liu has taught at high school before and has a high opinion of Christian Brothers students.

“Let me put it this way: CB students are pretty good,” Mr. Liu says. “They want to succeed and their parents support them. They want to — and will — have bright futures.”

Mr. Liu’s relationship with his students is almost fatherly. He truly enjoys working with the diverse range of students at CB and treasures interacting with each and every one of them.

Mr. Liu and the Mandarin courses have been a great addition to Christian Brothers, diversifying the lives and languages of students schoolwide.