Almost 500 Falcons flock to Sacramento State to raise money and awareness of hunger in Sacramento. Run to Feed the Hungry has thousands of people who sign up each year, with 100% of its proceeds going to the Sacramento Food Bank. Each year CB offers family and friends of the CB community to race under […]

Almost 500 Falcons flock to Sacramento State to raise money and awareness of hunger in Sacramento. 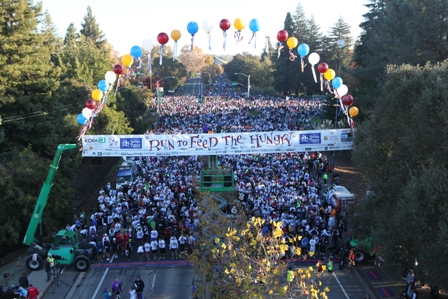 Run to Feed the Hungry has thousands of people who sign up each year, with 100% of its proceeds going to the Sacramento Food Bank. Each year CB offers family and friends of the CB community to race under the team of Christian Brothers High School. Our team can be found running the 5k or 10k, timed or untimed, in all age groups. .

Teams for Run to Feed the Hungry are given a team parking area, a tent with snacks and coffee, and a professional team photo. These are just a few of the benefits of being on a team — plus who does not love running with fellow CB families!

The Talon caught up with Mr. David Levasseur to learn more about what signing up for specifically the CB team entails.

“Signing up for the CB team means supporting our school and receiving a race shirt with the CB logo on the back.” Mr. Levasseur shares. “This year we had 497 people sign up, the biggest we have ever had. Our goal was to get to 500, which we were only three away of achieving.”

“I thought about just signing myself up three more times,” Levasseur jokes.

CB had the most signups out of any school that was registered to be a team — in fact, we are second biggest overall team, falling short only to Wells Fargo, a huge corporation with many member opportunities. With this said, what an amazing turnout, CB!

Signing up with the CB team does not mean you must run with the team. Many run with families and friends, whether they signed up with CB or not.

The Talon caught up with some Falcons who plan to run for the CB team this Thanksgiving.

Austin French (’15) is doing the 5k race for the first time ever. He has not run for the CB team and is looking forward to what it has in store.

“I’m excited to see what Run to Feed the Hungry is all about,” Austin says. “I am sure I will not be disappointed.”

Camden Belliveau (’15) is also running the 5k for the CB team for his third year in a row.

“I enjoy Run to Feed the Hungry because it is nice to give back to the community and run with my friends on Thanksgiving.”

Camden goes on to joke how, “it also makes me feel less guilty about all the food I am going to eat the rest of the day.”

There you have it CB, congratulations on the biggest team CB has ever had. And of course, good luck to the 497 CB team members. If you are participating with the team be sure to get your race shirt, bib, and parking pass from the Main Office by Tuesday after school.