How Benedict Cumberbatch managed to cumber-snatch the hearts of fans around the world and at CB. The name Benedict Cumberbatch may draw mystified looks and shrugs. It may even be received by laughter. But more recently, the name of this English actor has been greeted by squeals, screams of delight, and general hysteria. “He’s become […]

How Benedict Cumberbatch managed to cumber-snatch the hearts of fans around the world and at CB. 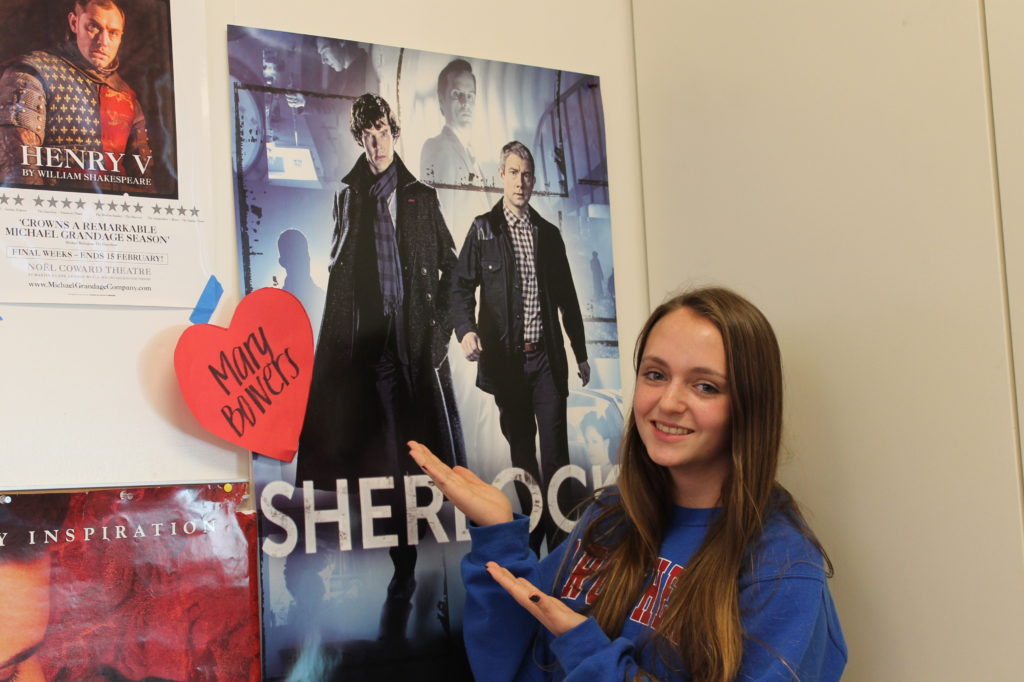 The name Benedict Cumberbatch may draw mystified looks and shrugs. It may even be received by laughter. But more recently, the name of this English actor has been greeted by squeals, screams of delight, and general hysteria.

Cumberbatch has taken the world by storm since his debut in his role as Sherlock Holmes in BBC’s production of Sherlock.

Bailey Leek (’18) also encountered Cumberbatch for the first time while watching the show. At first, she thought that he was “a very strange man to be pursued by so many fans,” but has grown to love the burgeoning actor.

In his role as Sherlock Holmes, Cumberbatch has helped to set the bar high for the remakes and reboots that seem to plague our media today. While the publications by Sir Arthur Conan Doyle were set in the late 19th to early 20th centuries, Sherlock is an interpretive adaptation set in the modern day.

There have been many film adaptations of Sherlock Holmes, but none have been nearly as successful as that of Sherlock, which modernizes and recreates the Doyle’s work without spoiling its intellectual appeal.

“I think he’s redefined one of the iconic characters of the 20th century,” Ms. Bowers says vehemently.

“He takes on a classic character that has been played many times before, but he puts his own twist on it,” Bailey says. “That makes him stand out from the rest.”

Cumberbatch plays many roles in his films, adopting the characters of scientists, animated penguins, dragons and in his own words, a “high-functioning sociopath,” all of which viewers have fallen head over heels for. He is even rumored to be taking on the mantle of Dr. Strange, a Marvel superhero and mystic who will add yet another dimension to his diverse list of parts.

Ms. Bowers believes that Cumberbatch has “attracted legions of fans because of the roles he plays.”

“Sherlock, in an odd way, is a fairly sexy character,” she says.

The intelligent character has certainly struck home with Bailey.

“Benedict is attractive in the roles he plays, where he is commonly a genius with great power.”

Fans around the world admire him for his commitment to his characters, applauding him for jumping in with confidence and performing to the best of his abilities. They, too, feel the power with which Cumberbatch commands the eyes of viewers worldwide.

“He’s also a handsome man,” says Bailey, “which might help just a little.”

Cumberbatch is certainly the catch of the year, but many have released dejected sighs upon hearing about his recent engagement.

There seems to be a bright future ahead of this immensely talented actor. Success is undeniable for someone who has “pulled off playing Sherlock Holmes,” according to Bailey.

“He may be winning an Oscar this year!” says Ms. Bowers. “Cumberbatch is definitely going to have an Oscar nomination for the Imitation Game, and a nomination will propel him to greater heights.”

Whether or not Ms. Bowers’ prediction comes true, Cumberbatch’s legions of fans are certainly an indication that he is an actor that we should all keep an eye on.