Halloween’s coming fast, but if the students of CB think that’s the spookiest thing happening on the weekend of October 31st…then they’ve got another thing comin’. This fall, Homecoming falls on November 1st, one day after October 31st, or, Halloween. But with all the frightful fun of Halloween, the annual holiday only pales in comparison to the spookfest […]

Halloween’s coming fast, but if the students of CB think that’s the spookiest thing happening on the weekend of October 31st…then they’ve got another thing comin’. 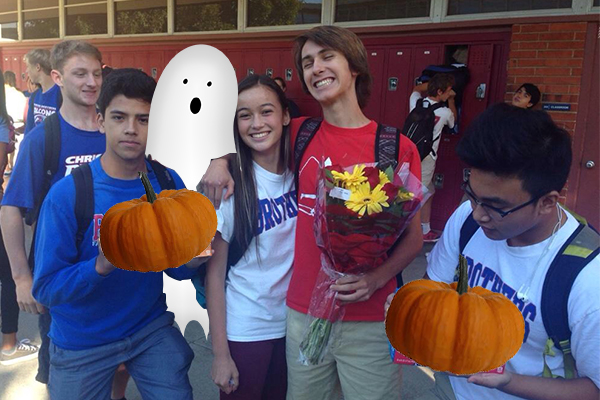 This fall, Homecoming falls on November 1st, one day after October 31st, or, Halloween. But with all the frightful fun of Halloween, the annual holiday only pales in comparison to the spookfest that is…Homecoming season.

From freshman to seniors, every boy and ghoul in town gets a taste of the horrific Homecoming traditions.

It’s the time for young witches, wizards, and werewolves to explore what high school is all about. Traditionally, boys ask girls to the annual terror-fest, but if you think it’s all a little weird, poppin’ the question could get a little creepy, or…downright spooky.

But really, watching boys with cliche signs and girls who find it so romantic get excited over Homecoming proposals makes me feel really awkward. When I see it happen in the halls, I can’t really do anything but watch, awkwardly.

It’s like a planned social train wreck and everyone’s invited.

But I’m a big ghoulie hypocrite. As spooky as Homecoming gets, I’m going to my third CB Homecoming this fall. I mean, it’s fun going out and getting dinner with a date, and Homecoming is how that opportunity comes — but is that how we want high school to be?

There’s something lost too, when people think boys ought to ask girls to the horrorfest. It makes sense that girls get excited about the only romantic thing a guy might do for them. But is that really reason to be excited?

There are guys who make romantic gestures without Homecoming and there are girls who couldn’t care less about going at all, but for everyone else, Homecoming becomes an inescapable social standard.

An anonymous sophomore apparition knows a thing or two about the creeps of the season — this year he decided to walk Warlock Way and ask a girl to Homecoming. I asked him about his meeting with the midnight monster and whether or not it was spooky.

“I walked behind her, scared to death — my legs were literally shaking. I was sweating in places that I didn’t know sweat could come out of.”

“So she opened the locker and I said kinda desperately, ‘Please go to Homecoming with me’ and she said yes.”

On paper the story looks ghastly, and it was when he told it. But I’d be a slimy little news goblin if I ignored why the young spook felt the way he did. Asking a girl to Homecoming can be fun.

I mean, he asked a girl out — even though it was via long lasting social norm — of course he’s gonna feel on top of the world. He gets to be the bogeyman on the dancefloor!

But don’t fool yourself — there’s more than one face to this phantom.

“All my friends are saying like, “aw, let’s all go stag” and then people start to ask people and I’m sitting here kinda like, ‘alright, am I the only one that’s not gonna get asked’?” fears Carleigh Osen (’15), a haunted senior.

“Am I gonna be sitting in the corner kind of alone?”

More than kind of, Carleigh.

Carleigh’s actually been asked to Homecoming since I interviewed her, but people face this question every year. Not everybody can always be the cool ghoul on campus.

But in the end, every monster, spirit, and phantasm at CB can join in the fright or not. Some people love to take part in this macabre of a night, and others would rather stay away from the spine-chilling spookfest that is Homecoming.