We’ve all read it. We all know the story. We probably have even seen the movie. But now there is a different way to experience this thrilling piece of extraordinary literature. (photo courtesy of Sacramento Ballet Company) Many people know ballet as tutus, toe shoes, and turns, but this weekend the Sacramento Ballet brings the […]

We’ve all read it. We all know the story. We probably have even seen the movie. But now there is a different way to experience this thrilling piece of extraordinary literature. 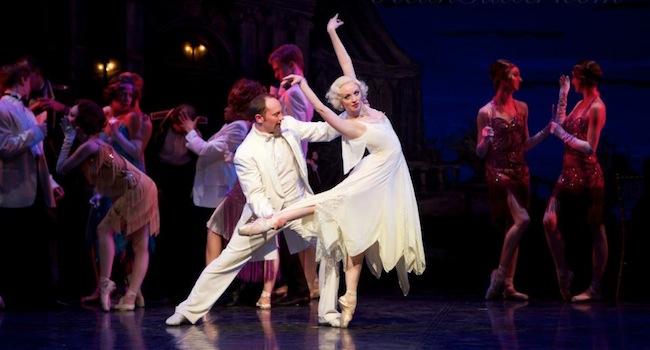 Many people know ballet as tutus, toe shoes, and turns, but this weekend the Sacramento Ballet brings the classic story of F. Scott Fitzgerald’s The Great Gatsby, into the dance world with a performance at the Sacramento Convention Center. And this production is anything but an average ballet.

Take a moment and imagine this: an extravagant party, food tables piled high with tasty treats, flapper dresses twirling around the dance floor, a waitress offers a glass of the finest champagne, the smooth sound of jazz music drifts from the band. You are in the 1920s.

The Great Gatsby in and of itself is a spectacular story. So many aspects make the work such a powerful read.

“It’s not so much the story as it is Fitzgerald’s writing, which is extremely poetic and beautiful,” literature instructor Ms. Chrys Cassetta explained. “But also the story is intriguing because it represents the 1920s, all the turmoil that was going on during that period of time, the fact that there was all this bootlegging going on because of prohibition, and the role of women was beginning to change.”

What this novel represents and stands for makes it essential to the junior curriculum.

Reading the novel and understanding its symbolism and literary content is so important, but so is experiencing different forms of interpretations of the novel.

“I think it’s important for different interpretations, different media like ballet, opera, something like that. I haven’t seen the ballet, but I understand it’s amazing, so yes.”

Seeing the ballet creates a unique visual of the themes and symbolism Fitzgerald illustrates. Live 1920s-inspired music, flapper dresses and tuxes for costumes, elaborate scenery, and in this particular production there is narration. Not your average ballet, right?

The dancing itself is not just all classical — to mimic the ragtime and jazz music, there are elements of the Charleston and other classic 1920s moves. Stunts spice up the choreography to an even greater extent and the movement is precise and flawless, creating a pristine production.

Whether you are looking for a night out with the girls, or a date night, or just want to try something new, this production is worth every second. Do not miss this opportunity. Go back in time and experience the roaring 20s The Sacramento Ballet Great Gatsby style.

The showtimes for this weekend: