Falcon Force is bringing CB spirit to a whole new level. Christian Brothers recently won a poll asking which Sacramento area high school has the most school spirit. The Talon caught up with our Co-Student Activities Director, Ms. Annie Hoekman, as well as Falcon Force member Isabella Manning ’15, to find out more about what the differences are […] 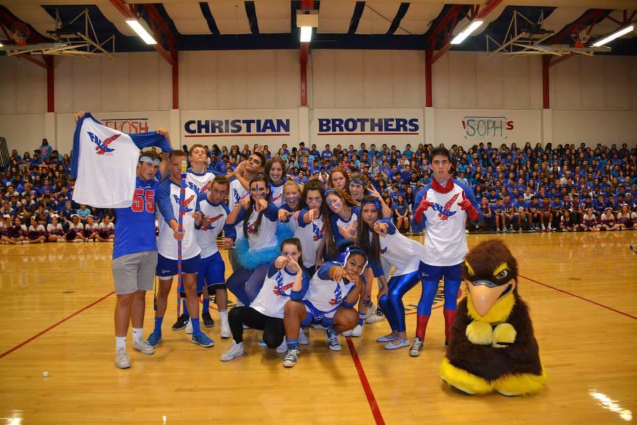 The Talon caught up with our Co-Student Activities Director, Ms. Annie Hoekman, as well as Falcon Force member Isabella Manning ’15, to find out more about what the differences are this year, how honored they were about the results of the spirit poll, and what their plans are to make this a fantastic year.

Ms. Hoekman finds there to be more spirit this year than last year and is excited for this year’s Falcon Force to leave an everlasting mark on CB.

“This year’s Falcon Force students have really bought into Falcon Force as well as reviving school spirit and want to bring it back,” explains Ms. Hoekman, “they really saw something that was lacking and they decided to fix it.”

This is Isabella’s first year on Falcon Force and she is looking forward to helping the Seniors have an amazing last year in high school.

“Falcon Force kind of came together and said we need to change things, especially for the seniors so that it is a memorable senior year.”

Holy Bowl is Falcon Force’s biggest game, and Ms. Hoekman and Isabella were very proud of how the cheers and overall spirit during the game turned out.

Our loud presence at Holy Bowl may have even been what landed us a spot in the poll for the most spirited high school. Falcon Force was very excited when they found out that CB was in the running for most school spirited and were very surprised when we won.

“We knew CB was very spirited at Holy Bowl and we even had people coming up to us saying we did a great job,” Isabella says.

Falcon Force has put a lot of effort into this year’s spirit and is excited to be recognized.

“Winning the poll just made us all realize that the effort we put into making new cheers and staying spirited throughout sporting events is really paying off and that people even outside of CB are recognizing it.”

Ms. Hoekman even informs the Talon that Falcon Force plans on making appearances at more sporting events this year, and not just our big games against teams such as Jesuit and St. Francis.

This year is going to be full of new cheers and a crazy amount of spirit at our sporting events. Be sure to catch Falcon Force and your fellow classmates cheering teams on and making a name for the Christian Brothers cheering section.

CB may not always win on the field, but our Falcon Force and cheering section will always be the loudest.