Seniors take various approaches to living up their final year of high school.  Seize the moment. Grab the bull by the horns. YOLO. You’ve heard it been said a million different ways. But what exactly does it mean to “seize the moment?” This phrase resonates most closely with the class of 2015. Embarking on their […]

Seniors take various approaches to living up their final year of high school. 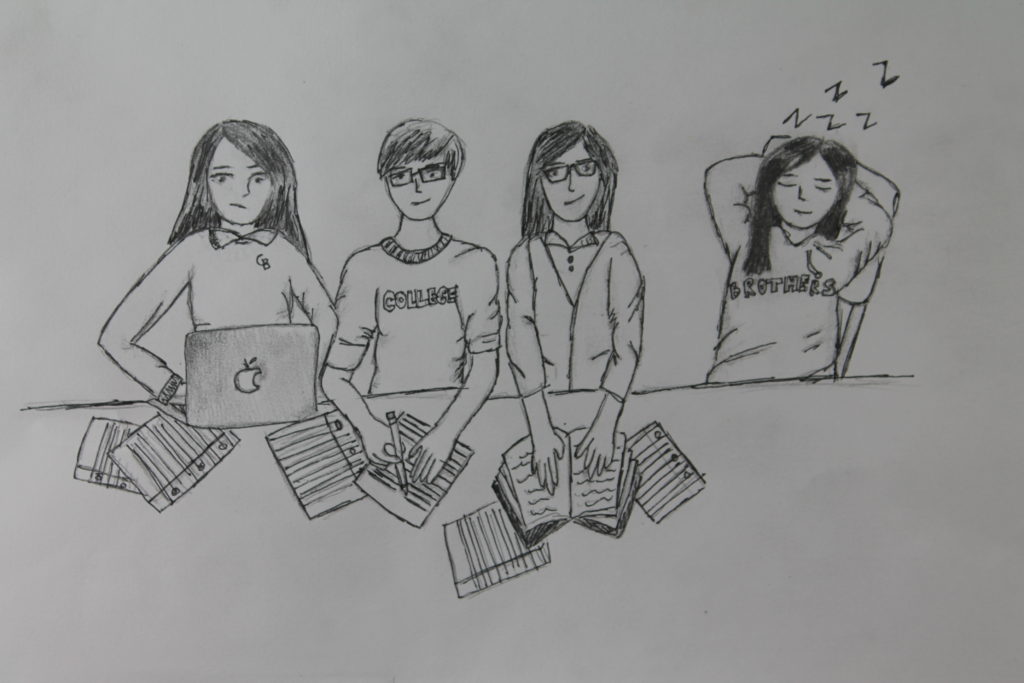 Seize the moment. Grab the bull by the horns. YOLO. You’ve heard it been said a million different ways. But what exactly does it mean to “seize the moment?”

This phrase resonates most closely with the class of 2015. Embarking on their final year at Christian Brothers, each CB senior has very different attitudes of the school year.

With a fresh start to the fourth and final year of high school, seniors are at last confronted with a final decision: to seize, or not to seize.

Some seniors believe they were inherently born with senioritis. Although this can be true for some, it’s not the case for every high school student during their senior year. If you have a hard time trusting me on this scenario, just take a look at Christian Brothers seniors Daniel Lee (’15) and Dante Mazza (’15), who have a unique perspective regarding senior year.

It isn’t uncommon for students to have grandiose expectations for senior year. But don’t be too fooled. Daniel reminds everyone that “High School Music is a movie. Keep that in mind.”

So then what is the hype all about?

“If you’ve heard it’s a lot of work, but also really rewarding, then it lives up to its hype. But you’re not exempt from rules–from stress. You’re still a person,” Daniel concludes.

But the hype of senior year isn’t entirely overrated. It’s certainly still a special time, “unlike any other year,” says Dante.

“It’s a transitional period. In terms of academic significance, it’s not as important as the previous three years have been. It’s more about taking advantage of our last year at a school like Christian Brothers. Wherever we are next year, we will not have the same opportunities as we do now,” Daniel explains.

There is no doubt that Christian Brothers offers students a myriad of recourses that can be used at our advantage. Senior year is a good time to do anything that perhaps, you were too timid or busy to do previous years.

Want to start a club? Want to be involved in student council? Senior year is the perfect time to do it.

“Senior year is not the time to stop,” Dante says. “We have the leadership ability and capability to start something new.”

The duo is excited to announce the start of the Karaoke Klub (the “kk”), and expect school-wide participation. Alongside clubs, these seniors are actively involved in our school. Both seniors are members of student council, Daniel is working hard on the senior video, and Dante is a part of the Open Mic crew.

While the freedom you are given as a senior sounds great to an underclassman, it’s true, the ultimate freedom we are longing to achieve is college. But even though we’ve only been in school for a month, senior year goes by very quickly.

The years I have spent with all of my classmates for four years will come to an end in just eight short months, and we will all begin our new lives in different places. I can’t help but think about this upcoming phenomenon as May 22nd approaches closer each day.

With college comes innumerable change, and my classmates and I are eager to see where this change may take us all.

At this point, the general attitudes of our senior class has been one of excitement with a touch of resignation for some. But although we cannot wait for the next phase of our lives, it is equally as important to enjoy where we are presently, as seen by Daniel and Dante.

“We’ve reached the peak, and it’s time to have a good time. To enjoy our classmates, our teachers, our school,” Dante concludes.

And I suppose this is what senior year is about–realizing how much you have experienced growing up in the same place, while eagerly awaiting the life looming before you. It’s a year filled with uncertainty, a little restlessness, and unfathomable possibilities. It is and will be something we as classmates will never forget, and it’s just begun.

So by all means, seize away.