The Napa earthquake, the hardest hit to northern California in 25 years, greatly impacted members of the CB community, (Pictured, Vanessa Ellis’ (’16) young cousin outside of their grandmother’s house in Napa, CA after the earthquake.) The day was Sunday, August 24th 2014. The location– Napa, CA. All was quiet and still in the early hours […]

The Napa earthquake, the hardest hit to northern California in 25 years, greatly impacted members of the CB community, 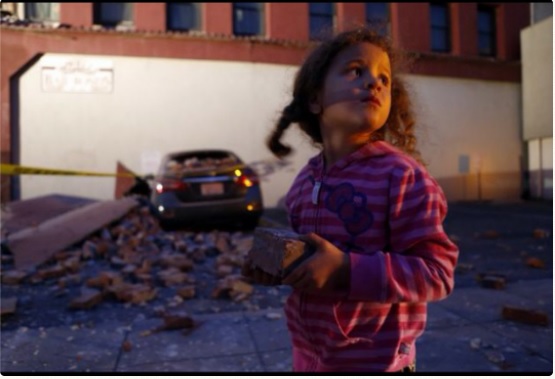 (Pictured, Vanessa Ellis’ (’16) young cousin outside of their grandmother’s house in Napa, CA after the earthquake.)

The day was Sunday, August 24th 2014. The location– Napa, CA. All was quiet and still in the early hours of the morning, but that wouldn’t last for long. At exactly 3:20 AM a massive earthquake rocked Napa, and people as far away as the South Bay and Davis felt the impact. A 6.1 magnitude earthquake had just occurred, the likes of which had not been seen since 1989.

A scary and surprising incident, this literal earth-shaker of an event caused panic all over the state. Jerry Brown, the governor of California, was driven to request financial federal aid with staggering repair costs totaling up to $1 billion. Brown went further to request a declaration of a major disaster for the entire state of California from the White House.

Most everybody in the Sacramento area has heard of, or experienced, the recent Napa earthquake. What most people don’t know, however, is the impact it created in almost every Californian’s life. A very widespread group was impacted, including some from the Falcon community.

One of the impacted was Ms. Mary Alice Spinelli (’99), a beloved religion teacher. Her story is similar to others who experienced the earthquake, the surprising part is that she was impacted all the way in her Vacaville home.

Ms. Spinelli clearly remembers the details that I was in bed, asleep, when [she] was awoken by the quake at exactly 3:21 in the morning. She was present in the home along with her husband and young daughter.

When asked what her first reaction was she states that she “knew right away that she was in an earthquake.”

“I immediately said ‘earthquake’ and did like a mom seat belt thing and I ended up smacking my husband, said Ms. Spinelli, smiling at the recollection.

Luckily, Ms. Spinelli recounted that none of her property was damaged, nothing fell off the walls, but the earthquake changed the positions of the dresser and bed, [and there was] a lot of shaking.

She remembers a million thoughts racing through her mind all at once and her confusion as to what to do in this surprising incident.

She stated aloud that she didn’t know if she should, “start running for shelter as opposed to [staying where she was].” She said that these thoughts had the “biggest impact on her because it felt like it was going on forever.”

The most frightening experience of the whole night was her disorientation as to where to go first, her daughter was in another room and Ms. Spinelli was torn between “running for her [daughter’s] doorway or waking her up.”

Junior Vanessa Ellis (’16) was able to talk about both a personal and family experience pertaining to the recent disaster. Her grandmother lives in Napa and was right in the midst of the action of the morning’s big shaker.

According to Vanessa, the earthquake in Napa was an extremely intense event for her grandmother. The “pictures fell off [the walls], the fan in the kitchen fell to the ground and broke, the TV fell and shattered, and the sidewalk in front of the home crumbled completely”.

Vanessa’s grandmother answered “yes”, she did realize right away that an earthquake was occurring. Her smart reaction was to “stay put, on the couch in the front room [of the house]”.

Davis was likewise hit, though not quite as extremely as Napa was impacted. Vanessa recalls that she awoke in her Davis house to, “the bed shaking and the blinds moving. The chandelier in the living room was swinging back and forth”.
Nobody was injured in Vanessa’s personal experience, but her grandma’s home was severely damaged and the earthquake served as a scare to both Vanessa and her grandmother.
This earthquake, the strongest in Northern California’s history in 25 years, reportedly injuring 200 people, damaged historic buildings in downtown Napa and turned personal property to rubble.

The damage is not even over yet. There has already been 90 post tremors, one of which was the 3.0 aftershock on the morning of August 24th. All California can do now is sit tight with fingers crossed, wondering, will this disaster ever end?