Getting To Know Jonatan

CB just doubled their Swedish population. Meet the latest Falcon Scandinavian sensation. Jonatan Gihl (’15) is CB’s newest exchange student from Sweden. “I love being in the U.S. and coming here for high school was a big deal for me,” Jonatan says. “I wanted to explore something other than the Swedish type of education and the […] 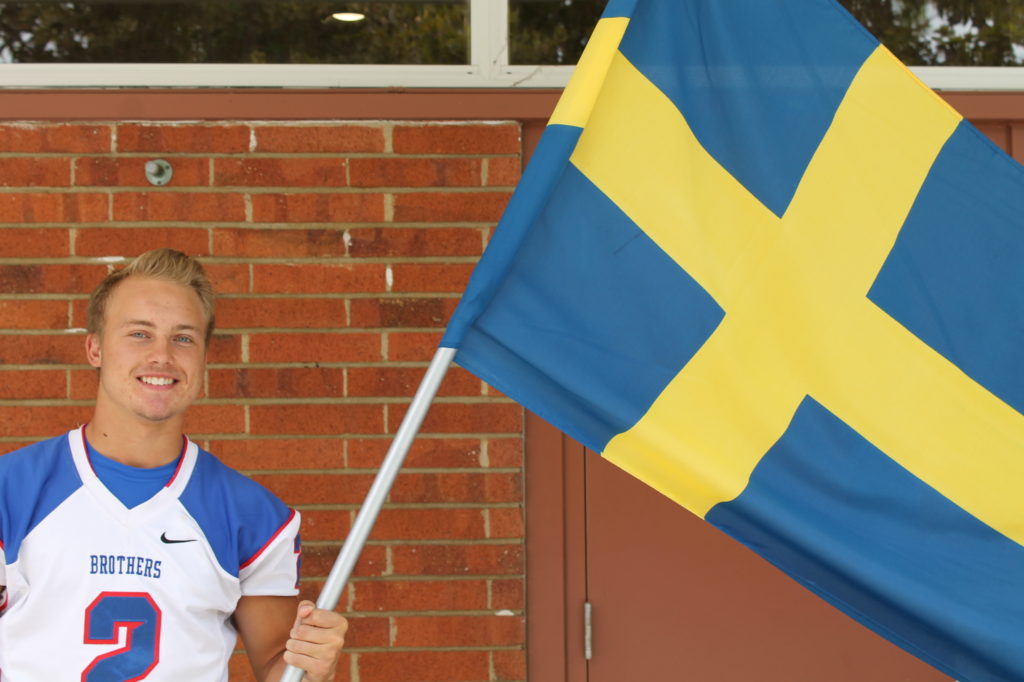 “I love being in the U.S. and coming here for high school was a big deal for me,” Jonatan says. “I wanted to explore something other than the Swedish type of education and the Swedish lifestyle.”

Of course, exploring a new world is an amazing experience. But that is not the only reason Jonatan wanted to come to the States.

“I wanted to go to the US because I want to play football in college,” the Swede shares. “I figured if I go one year in high school, maybe I’ll have a better shot at making it to a good college.”

College is not too far away for this senior, but he is planning even further into the future.

“I’m always trying to live the American lifestyle — live in a good neighborhood, live in a house, but we will see how that goes after college” Jonatan tells.“I also want to be a U.S. citizen.”

Taking it back to the present day, Jonatan admitted that he was pretty nervous about the big change from Sweden to America.

“I was a little worried about how I would transfer in to American football, but the teammates are great and I’m really enjoying my CB experience so far.”

Even though Jonatan has only been here for a short time, he has already made lots of new friends.

“My favorite thing about CB so far is that all the people are so friendly to me. I feel like I’m a part of a family,” he explained.

Lucky for Jonatan, he already had a friend at Christian Brothers in Chris Guillen (’15).

“Jonatan’s dream is to play college football here in America, and he thought it would be a good chance for him to play high school football first,” Chris explained.

The two Swedes have known each other for quite a while.

“Jonatan started playing for my club team when he was 12 years old,” Chris said. “He was my receiver so that’s how we started to get to know each other and we’ve been best friends ever since.”

This foreign exchange student is fitting in quite nicely, but he has noticed some big differences in the schooling system.

“We don’t have the same classes, we have longer breaks between our classes, oh and um we get paid to go to school,” Jonathan explains

Did you hear that? PAID TO GO TO SCHOOL. Christian Brothers should take notes.

“We get $200 a month from the community, but if you don’t go to your classes you don’t get the money,” Jonatan explained.

Clearly the school system is extremely different, but one of the biggest changes was obviously the language.

“I got a good head start when I was younger with English,” Jonatan told the Talon. “My mom had a big impact because she put me in front of the TV and I picked up the language from that.”

But that was not the only way Jonatan’s English got to be so great.

“I got even more prepared in school because I was always serious about if I’m going to America I have to learn the language and learn how to talk a different way,” he says.

“I made it one of my top priorities.”

School is nice and dandy, but according to Jonatan his favorite thing about the US so far is…

All kidding aside, Jonatan seems like a great addition to the Christian Brothers community. If you see him at school or a football game, be sure to say “hej hej!”