A beloved CB teacher rides off into the sunset, leaving behind a legacy of humor, generosity, and wisdom. I walked into Ms. Jennifer Makol’s classroom on Wednesday, April 30th, to sit down with her for an interview. I had a tripod from KBFT in my hand and her first words were, “I’m gonna be on camera?” I apologized for not […]

A beloved CB teacher rides off into the sunset, leaving behind a legacy of humor, generosity, and wisdom. 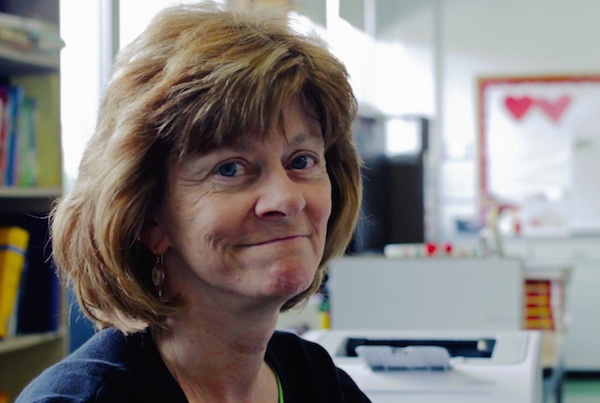 I walked into Ms. Jennifer Makol’s classroom on Wednesday, April 30th, to sit down with her for an interview. I had a tripod from KBFT in my hand and her first words were, “I’m gonna be on camera?”

I apologized for not warning her; I assumed that when I previously mentioned Daniel Lee’s (’15) involvement in the interview she had understood that this was a piece for KBFTalon.

After 16 years at Christian Brothers High School, Ms. Makol has decided that it’s time to say goodbye. Her retirement shocked me, but I suppose it came as no surprise; she’s developed the reputation for being one of the greatest contributors on campus. In addition to teaching sophomore literature, Ms. Makol has also led the school’s

Not a moment after I mentioned KBFTalon, Ms. Makol started to rant about some poor student’s essay. She made me drop the tripod, come to her desk, and agree with her irritation over the thesis, paragraph focus, and commentary. Daniel walked in on this pandemonium and was quick to understand what was happening.

The two of us laughed under our breath the entire time. Ms. Makol’s inconvenience isn’t funny, Ms. Makol is just always funny. She approaches things with either kindness and praise or with a skepticism and confusion I can only describe as Makolism.

I distinctly remember the first time I raised my hand in her sophomore literature class. It must have been within the first two weeks of the school year, because I was set on making a positive first impression. I don’t remember what question she asked or how I responded, but I remember she chose me and I remember what she said.

Getting a wrong answer is no big deal, it’s a part of learning, but like I said — Makolism. Her “no” was filled to the brim with “My god, how could you ever imagine that that was the right answer?”

I was sure she thought I was dumb. It hurt then. How could I be so wrong? Was the answer really that simple?

With time, I came to understand that Ms. Makol says exactly what she is thinking. She stays out of trouble though, because she never thinks a thought outside of her Bostonian maternal nature, and more often than not, her misunderstanding of students is hilarious. Just like it was on Wednesday, April 30th.

“Where’s my sanity? Gonzo!” she cried. Daniel was done setting up the camera. It was time.

Daniel and I had been planning the interview for some time; it was a project we both really cared about. After KBFTalon’s Tuxedo piece, we didn’t really care to push out another piece so fast. But sometime in March, we had heard about Ms. Makol’s impending retirement, and we knew we had found the future of KBFTalon.

“How do you know when your children are old enough to cross the street?” she told us.

The same way Mrs. Makol knew when it was time to retire. Before one morning in November, she could never imagine willingly leaving CB. She had no reason to. But on November 18, 2013, she woke up and thought, “You know, I think this is gonna be my last year.”

Ms. Makol has never appeared (at least to me) to forfeit any of her enthusiasm over literature or her classes. Even at the end of the year, as we neared the end of her Tour de Pain (every book we read in that class had something to do with war; the only exception was titled Things Fall Apart), Ms. Makol carried the bounce in her step that would occasionally turn into a dance.

I vividly remember the last few weeks before finals. We were reading The Moon Is Down and Ms. Makol still listened to the answers our class gave, even the half-thought ones. One day, she mentioned how for years she had been searching video store after video store for a very specific film adaptation of TMID that had been made in 1943.

I very quickly Googled the movie, found it for $12 on Amazon, and amazed Ms. Makol. She asked me if I could buy it for her, and I was more than happy to help her finally find that movie (I’m sure she could’ve bought it herself, but I don’t think she understood how Amazon works).

The movie arrived two days later (Thanks for the fast shipping, Amazon!) and I handed her the copy in class the next day. She told me that she had no clue if the movie was actually any good and that she only wanted a copy because she was curious.

I suppose in reading it, that ending doesn’t seem so funny. But that’s Ms. Makol. And that’s what makes the story worth retelling. She did pay me back, by the way.

A note from Daniel Lee:

“I don’t see myself as being the vanguard to lead successive years of students through the technological age.”

In addition to reminding us that she is indeed an English teacher, the dedicated educator exposed a truth that is becoming all too apparent in our society. Many adults are finding themselves in the dust left by the speeding train that is scientific and technological innovation.

While I find ordinary the capability to communicate and interact in a global village from my bathroom, those who were not raised under the same circumstances may not (Actually, I’m fairly certain that they don’t. My mom still asks me how to charge her iPod).

But we must also consider that perhaps this group of technologically-challenged adults does not desire to learn. Perhaps Mrs. Makol would prefer to read the paper slowly on her back porch rather than scrolling through fifteen pages of emojis, looking for the perfect one.

The bank of practical knowledge phases out its currency constantly. As the newest smartphones are released, the stick shifts and the tube socks are forgotten. This growing disparity of usefulness is something to which humanity will adapt, just as Mrs. Makol has.

“I wanna go to New England in the fall.”

She described her intention to read more, entertain more, and play more golf, but she’s only seen the leaves turn in New England once in 38 years. Daniel and I could feel the weight of her request.

It seems so ambitious– to try and give Ms. Makol something that speaks to a little part of everything that makes up who she is. But it’s the little things, like that. A ticket to Boston is not so expensive, but a teacher could never afford to leave school in the middle of the Fall semester to look at trees.

And that’s what it’s really about. More than anything, Ms. Makol is at a point in her life where she can no longer put in the invaluable effort she thinks the school deserves of her. There is nothing left to do but enjoy her own life and everything she’s worked for.

“It probably would all sound so trite at this moment, don’t you think?”

Yes, it would. But that’s okay, Ms. Makol. It only sounds dull because people who are celebrated tend to get the same treatment, and there are a few people worth celebrating. So I guess there’s no other way to say it.

Ms. Makol said those words at the end of our interview. I had no clue what it meant, but it seemed to be candid and I knew I was going to use the quote to end the article.

When I got to writing the actual ending, I realized I assumed she made the words up. They could’ve just as easily come from a song or a book. I didn’t know. So I googled the quote.

The Small Fry Club. It was a television show that ran nationally from 1947 to 1951, and after it’s cancellation, the show moved production and airing to a local broadcasting company based in, that’s right, Boston, MA.

It was a children’s show, and the show’s host, Bob Emery, spoke about literature, current events, music, and even ethics. He also sang and danced on the show. He referred to his audience as “small fry,” which was slang for children, and  he ended every single episode of his television show with, “So long small fry, it’s time to say goodbye.”

When the show started to air exclusively in Boston, Emery was already an elderly man, though his viewers and colleagues described him as being energetic. Even in the 60s, when he was nearing the age of 70, Emery believed that children could be reached with intelligence and respect (In the 60s, rock and roll blew up and kids were often seen as being “uncontrollable”).

I don’t know what else to say.