The world around us never stops changing, and there are no exceptions in the world of Video Production I, II, and III at Christian Brothers High School. Moving through the food chain of Video Production is not an easy task. On the bottom of the pyramid we have the Video I students, then comes the […]

The world around us never stops changing, and there are no exceptions in the world of Video Production I, II, and III at Christian Brothers High School. 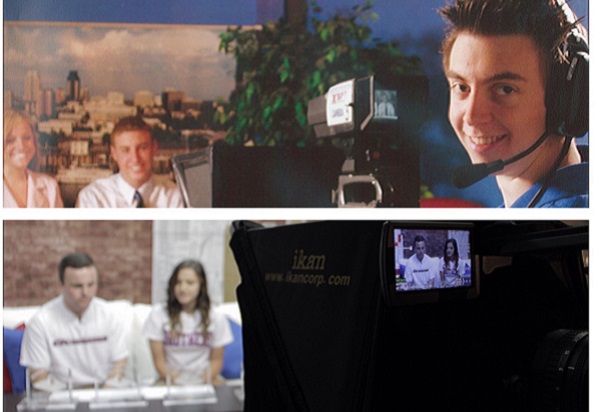 Moving through the food chain of Video Production is not an easy task. On the bottom of the pyramid we have the Video I students, then comes the KBFT Video II crew, the Video III class, KBFT alumni, and finally, program director Mr. Brendan Hogan ‘95.

But things change every year in Studio 608.The people, the set, the content, everything gets passed onto fresh, eager Falcons.

I will be entering the third level on the pyramid next year, which is why I became interested in the changes that occur in the process of leveling up. So, the Talon invites you to join us on the journey through the Video Food Chain. 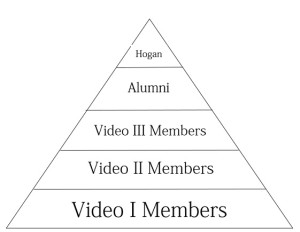 Where else to start but the bottom?

The Talon had the honor of speaking with Victoria Burbridge (‘16) to understand what it’s like being in Video I.

“Being in Video I is always a fun time, it’s just such great class,” the sophomore tells the Talon. “I’m so glad I made the decision to take the class.”

After watching a few of Victoria’s videos, I had to believe that she had some experience before becoming a Video I student.

“Prior to Video I, I knew just about nothing on how to ‘film’, the right techniques, or how to make videos look professional,” she shares. “But I’ve learned a lot of new skills that will help me when I become involved with KBFT.”

Speaking of KBFT, Victoria seemed very excited to become a part of the famous program.

“KBFT is something that always stands out, it’s the face of Christian Brothers,” she explains. “I’m so excited that I’m going to be able to be a part of the program that shows what CB is made of.”

I agree Victoria, being a part of KBFT is awesome, but it’s important to remember that it’s not all fun and games.

“I’m really eager to be in KBFT, but I don’t think I realize how much work it’s going to be. I can’t imagine what it will be like to make every single thing that they put on the show,” Victoria says. “Even though I know it’s going to be a lot of work, I’m thrilled that my work will be on display for the whole school to see.”

Video I is about learning the basics and wishing you were cool enough to a part of the daily KBFT broadcast.

Patrick Bell (‘15) has a great perspective on what being part of the KBFT show crew means.

“Being in KBFT is so much different than being in Video I,” the junior shares. “There is more responsibility because the majority of the class is self instructed.”

Video I and Video II are different, but both have their benefits.

“In Video I we were learning how to Photoshop, and create videos, while Video II is all about applying the skills we learned.”

The skills learned in Video I are what help create the videos the entire school sees on KBFT three times a week.

“Everyone has to take responsibility like making packages, producing the show, controlling the cameras, and running the teleprompter,” shared ”P-Bell” as he is known by his classmates. “The show is student-run, so it’s our job to make it the best that we can.”

But of course, being a member of KBFT is not as rewarding as being in the third level of the Video food chain.

“My hopes and expectations for the Video III class are that we do more film type stuff. I’m looking forward to doing less news and more creative things,” Patrick tells. “Being in Advanced Media Arts and Senior Video means I’m a part of something bigger, and I get to explore my potential more.”

As Patrick moves into the third level, he leaves behind wise words of wisdom for the next members of KBFT.

“My advice for the Video I students going into KBFT is to take it more seriously than we did. Sure, they had great Video I shows, but they also had time to rehearse and prepare,” Patrick explains. “They need to treat every day like their first and always try their hardest. I have faith in them.”

KBFT is mainly about reporting the hard hitting news facts, while Advanced Media Arts and Senior Video are more artsy and free spirited.

Maddy MacLeod (‘14) gave the Talon some insight on what being in Video III means.

“In the first semester of Video III we make films to enter film contests and the emphasis is on gathering our filming skills and also learning how to write a story,” Maddy described. “In the second semester, we film things that take a look back on our senior year at CB and create a video that we will be able to watch years down the road and remember.”

“Video III is different because we aren’t focused on news or broadcasting, but rather on honing our talents in on a film,” Maddy tells the Talon. “In Video I it was more about learning the basics and understanding the skills, but in Video II we focused on telling the news.”

Even though Maddy has become really good at what she does, it was not always easy for her.

“In Video I, I didn’t really know much about what I was doing, but as I went along I learned more about the technical aspect and the difficulties included, but it was a lot of fun,” the senior explained.

Maddy had the wonderful experience of being involved in Video Production for three years, but of course, everyone has their favorite video class.

“I enjoyed Video II the most because it was a chance for me to do what I’m most passionate about, which is news, broadcasting, and journalism,” Maddy explained.

As Maddy moves on into the next level of Video pyramid, the graduate, she leaves behind advice for the new Video III members.

“Learn as much as you can, and work hard,” she shares. “You get out of it what you put into it.”

Which brings us to the next level: the alumni.

Most of us know Mr. Dave Anderson ‘07 as the sophisticated Sophomore Literature teacher and Talon Media Adviser. But many of us don’t know that he too went through the KBFT food chain during his time as a Falcon.

Of course, everyone views each level differently, so Mr. Anderson gave a quick overview of each of them.

“Video I wasn’t about finding a specific focus — you got a load of everything, everyone did all the jobs, it was a great experience,” Mr. Anderson explains. “Video II is where you find what you want to do specifically, what angle you want, and what job you want to do. Senior Video is about being creative with the skills you’ve accrued and just having fun.”

After experiencing all of the lower three levels of the pyramid, Mr. Anderson knows that daily news reporting was the best fit for him.

“Video II — just because that season was really great. It was just a great group of people and I felt like we had a lot of freedom in terms of what we wanted to do,” he shared.

Even though Mr. Anderson is the only KBFT alum working at Christian Brothers, many of his friends also graduated from the program and went on to do great things as well.

“There was a guy in my class who is a news reporter for the NBC affiliate in Reno,” the literature teacher says. “One of my really good friends works for a film company in Los Angeles, he’s directed at least 50 music videos. Another friend, ‘the tricaster guy’, he works as a colorist in a post editing studio.”

Even people who don’t go into media careers find skills from the Video classes at Christian Brothers to be useful.

“Another friend of mine who is in med school, she wrote a lot of scripts [in KBFT] and she said that skill definitely helped her in terms of working under stress, deadlines, and pressure.”

Clearly, the graduates should be honored and respected. Luckily for us, Mr. Anderson leaves the students entering Video I a very wise message.

“Try to do every job at least once. At the very least you will get to learn skills, but you also start to appreciate the other people,” he says. “You get a greater appreciation for the team and what it takes to put a show together.”

Speaking of KBFT shows, Mr. Anderson has something he wants everyone to know about his seasons of KBFT.

“For the record, season 4 of KBFT is by far the greatest season in the history of KBFT and really set the tone for the years to come,” he exclaims.

Well Mr. Anderson, I’m not totally sure I agree with that statement. We’ll have to ask the boss, and top of the pyramid, Mr. Brendan Hogan ‘95

“My first couple of seasons we won two first place in the nation broadcast awards,” the KBFT Program Director says. “His year was excellent, I don’t know about ever, I think we can always improve.”

Even though Mr. Anderson thinks he was involved in the best years of KBFT, there is no doubt that the Video classes have changed over the years.

“It changes from year to year, some years are kind of a real hard hitting kind of news show, and other years are more entertainment and fun mix,” Mr. Hogan shares. “I think more than anything the technology has changed.”

The video classes have been a part of Christian Brothers for 12 years and have become an important part CB life.

Because Mr. Hogan has a unique perspective that no one else in the food chain has, as he sees the changes that have occurred since the program was created and understands the importance of being exclusive.

“I really enjoy that the show is different throughout the years, because if it was the exact same show every year, I think the students would pay zero attention to it,” Mr. Hogan explains. “It has to be different, it has to reflect the students who are making it and creating it.”

CB is always evolving, for example when they created a television studio at a school.

“The fact that Christian Brothers and its partners had this vision in the late ‘90s to plan and build a television studio is really the paramount part, the part that is special,” the head honcho tells the Talon. “Any new high school that is being built today has a television studio.” 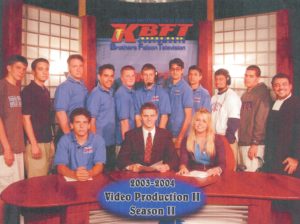 Christian Brothers High School is a place for trends to be set, but of course, everyone needs a little help.

“I like to think that all new ideas come from the students and i just help to steer them in the right direction,” he says.

Speaking of the students, the program instructor has some great advice for students hoping to be a part of the Video program.

“The KBFT crew wants dedicated students who are willing to work hard to increase and better the tradition we have created over the past 12 years.”

Every year of Video will be different, and nothing will change that.

“The real question is, ‘What is KBFT going to look like in 20 years?’ Probably not television as we know it.”