A Continuing Education In Creativity

For some students in the CB four year art program, education extends beyond their time in high school. The arts program at CB is an integral part of the college preparatory education offered here and is extremely important to a vast number of students. Many of the students who excel at the arts here are […]

For some students in the CB four year art program, education extends beyond their time in high school. 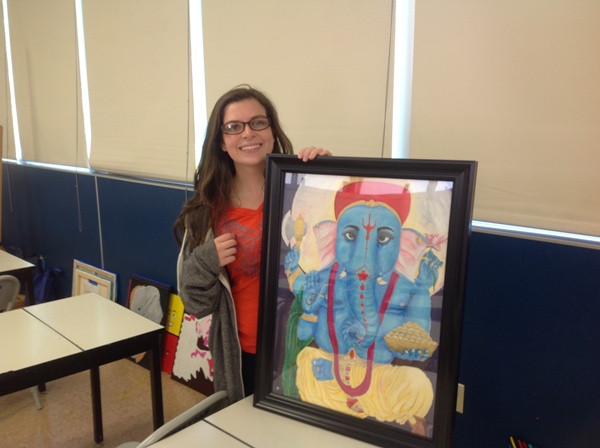 The arts program at CB is an integral part of the college preparatory education offered here and is extremely important to a vast number of students. Many of the students who excel at the arts here are so dedicated and passionate that they are planning to move forward in their field of art and shape a career around it.

Since CB offers a variety of artistic fields to study, each student develops artistic skills centered around various and unique talents. CB offers students the opportunity to study visual arts, such as drawing, painting, sculpting, and photography, cinematic and media arts, instrumental skills, such as band or orchestra, and choral musicianship.

So in what fields do CB students plan on continuing their education? The Talon spoke with three students about their plans for the future.

Heidi Holman (’14) is a visual art student who has been active in CB’s art program since she was a freshman. She is planning to attend Ex’pression College for Digital Arts in Emeryville, Calif. to study animation.

Her interest in animation started in Mr. Kevin McGovern’s class after she heard his animation presentation.

“I didn’t realize that animation was a career path,” she says. “I’m in the four year art program [and] it’s really given me the skills I need to go into this career.”

She said that she has five huge portfolios and that she’s learned a lot about figure drawing, which is very helpful for still life art. CB has also taught her that being an artist requires her to focus for long hours and through late nights.

With role models like Walt Disney, John Lassiter, and Julie Andrews, Heidi is thinking of looking at a college called Cal Arts for post graduate studies unless she gets a job right out of college.

“My dream goal is to either work for Pixar or Disney’s animation program,” the senior says. “The school is literally four blocks from Pixar studios.”

She also wanted to thank the art teachers here at Christian Brotehrs.

“The CB art teachers have really inspired me because they’ve given me the skills I’ll need for the future.”

Lucas Dudley (’14) plans to major in cinematography after he graduates.

“There are a lot of great colleges for film,but unfortunately most of the really great film colleges cost a lot of money,” he says.

“For now I plan on going to a community college either in Orange County or here in Sacramento depending on whether or not I can make enough money this summer to afford living expenses for at least semester,” he explained.

“Jenner and I used to make movies on my webcam in my room. I didn’t realize how much I enjoyed making movies until around freshmen year when I got a camcorder for Christmas.”

His passion for filmaking really took off his sophomore year at the Student Television Network Competition in Dallas.

“I was in the movie trailer category, I had to make a 30 second movie trailer in four hours and it had to be titled ‘The Occupation’. I didn’t place unfortunately but I fell in love with the process,” he said. “It wasn’t until then did I realize I could actually make a career out of this hobby of mine.”

He explained how CB and KBFT have helped him to explore his interests and forge a path.

“Without Christian Brothers I would be lost right now. I have never been a good student, I have always struggled through school and I still do,” said Lucas.

“KBFT is the only reason I have hope that I can be successful. CB has allowed me to strive because it has unique programs like KBFT,” he continued. “I really dislike structure…but the classes like KBFT and the four year art program are what makes CB perfect for all the misfits like me.”

He went on to say how Mr. Brendan Hogan (’95) has been one of his role models.

“Mr. Hogan has been my biggest role model in life for many reasons,” said Lucas. “He structures his class in such a way that he will teach me anything I want to know all I have to do is ask.”

“KBFT is a very student run class and it taught me that things don’t fall into place if I want something done the only person responsible for making it happen is me,” he explained.

Lucas explained his perfect career path, elaborating on the pros and cons of a career in cinematography.

“Hopefully when I graduate from college I can land a career that allows me to travel the world and make movies,” he said. “In a perfect world I would get a great job as a cinematographer, travel the world for 10-15 years and save up enough money to settle down and start a family.”

He went on to say what he thinks of as a more realistic option.

“I’ve learned the best thing to do in life is try my hardest to get what I want in life but to be happy with whatever I get.

As long as I can make enough money to live off of while making films I will be happier than most,” he finished. 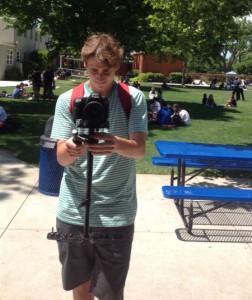 Lucas Dudley doing what he does best.

Allison Lian (’14), a singer, dancer, and actor, is continuing her musical education path at California State University, Fullerton next fall where she is entering with a designated major in Musical Theater.

Allison has enjoyed signing for her entire life, spanning back to grade school.

“When I was in kindergarten, I was asked what I wanted to be when I grew up,” she said. “My answer was simple: I wanted to be a singer. I have always loved singing.”

From a young age, Allison was learning to sing.

“When I was in second grade, I began taking vocal lessons where I learned how to sight read and learn little show tunes,” the performer said. “After a few years I stopped until about a year ago when I started receiving very formal voice training from a San Francisco opera singer named Zachary Gordin.”

Allison has been in Women’s Chorus, Chamber Singers, Honors Chorale, de la femme, and Vocal Jazz during her time at CB.

“ I was also selected to be a part of a special choir that sings with the Berwick Chorus in the Oregon Bach festival and was able to participate in passing of the baton ceremony,” she continued.

She explained how CB has helped her on her path to a musical career.

“The choir program is incredible. We are able to learn so much about musicianship and collaboration from our two directors Ron and Holly Slabbinck,” Allie said. “I feel I understand music very well now and that is because of the instruction I received over the past however many years from the Slabbincks.”

Mrs. Holly Slabbinck in particular has been a huge influence for Allie.

“Holly Slabbinck has been a huge role model for me,” the singer said. “She is an amazing singer…I have seen her adapt to many different groups and help each student find a way to reach his or her full potential,” Allie said. “She has been such an amazing teacher and I feel so blessed to have been able to work with her.”

Allison went on to explain how she became a dancer.

“It wasn’t until about 5 years ago that I realized my passion for dancing,” the senior said. ” I stopped into a small dance studio in West Sacramento and met one of the most influential people in my artistic development: Lena Logan. I took one ballet class a week and then I was asked to be a member of her competitive company.”

She’s even been a part of professional shows here in Sacramento. She played the part of Clara in Sacramento Ballet’s The Nutcracker when she was in 8th grade.

“I had only been training in dance for about a year at the time and that experience definitely pushed me to continue dancing,” she said. “I try to dance every day from about 5-9.”

Allison continued by saying how important her dance instructor has been to her.

“Lena Logan has also helped me to discover a lot about myself. She is able to create a completely accepting environment in her studio and lets each student work at his or her own pace,” she said thankfully. “I have grown more as a dancer under her instruction then I would at any other studio in Sacramento.”

Acting is one of her newer interests, only becoming one of her main focuses once she entered high school.

“I didn’t really understand the art of acting until Mr. Connor Mickiewicz came to Christian Brothers,” she explained. “He is extraordinarily talented and has taught me so much in the two years I have been able to work with him.

Allie elaborated on why she finds acting to be so enjoyable.

“I have learned that it is fun to be another person for a while. Putting on my character’s shoes and learning every one of her quirks, struggles, and loves truly makes me that person when I am on stage,” she said.

Allison hopes to make a career out of theater, singing, dancing, and acting in New York.

“Eventually, I want to be living in New York City performing as an ensemble dancer in some Broadway show or performing in an off-Broadway theater,” she says. 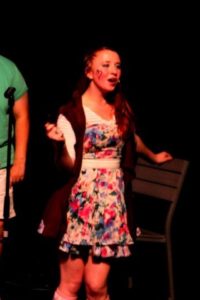 Each student has their own interests, but CB allows students with artistic interests in particular, to truly thrive. Students here have so many options, each creating an amazing array of possibilities for the future. Regardless of which field they are a part of, CB art students are well prepared for their future careers.