The Return Of The World Cup

This summer, the world will come together to watch an international roster of teams compete for soccer glory. Every four years the world comes together to watch athletes from all corners of the Earth participate in the most famous soccer tournament in history. The World Cup is a timeless event that people of all backgrounds, […]

This summer, the world will come together to watch an international roster of teams compete for soccer glory. 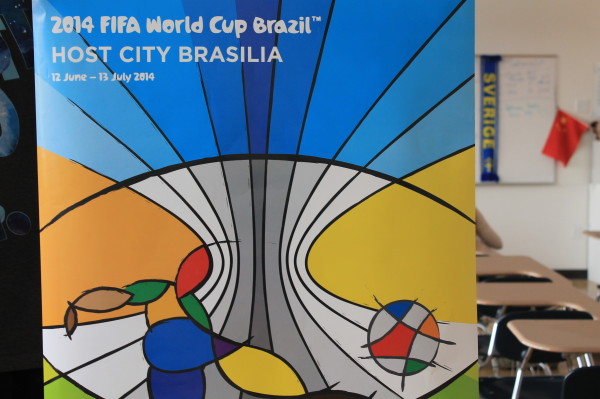 Every four years the world comes together to watch athletes from all corners of the Earth participate in the most famous soccer tournament in history. The World Cup is a timeless event that people of all backgrounds, creeds and ages can enjoy and appreciate.

That diversity and harmony is not felt more anywhere else than here in the United States.

That multicultural unity and diversity is not only felt here in the US of A, but also in our Northern neighbor, Canada.

“It really fun in Toronto, it’s the most multicultural city in the world and all the different cultures in the city make it a great experience.” said Ms. Howorun, a Toronto native.

Athletes from all participating nations play there hearts out on the pitch in an effort to bring soccer glory to their homeland. When it comes to the competing countries, everyone has a different opinion on who may win it all. Though many of the students here at CB had bold predictions about how the American national team would do.

Of course the age old rivalry, the colonies against the crown, an instant classic that Edwin believes would come down to nerve racking penalty kicks, only to have the underdog Americans taking home the cup.

I got an equally confident and bold answer when I asked a self proclaimed “soccer expert” about his favorite to win the tournament.

Less specific, yet more telling as to the American people’s confidence in Landon Donovan and Clint Dempsey to get the job done.

Obviously, being in the United States, most students have a slight bias or favoritism to the country they live in, but that didn’t stop some from “guaranteeing” a victory for some foreign favorites.

Spain is a threat to win the cup every time it comes around. Superstars like Andres Iniesta and Xabi Alonso make it impossible to count them out. Although, they are not the only favorite this year, as this years host team has a chance to make a run at the cup.

“Brazils got the home field advantage, and they’ve been looking really good. I’ve got faith in them. They’ll take it home again.”  explained Elmer Lizarde (’16)

Brazil’s rising star Neymar and elite cast of veterans can give Spain and the other European powerhouses a challenge for the cup.

Whether your favorite team wins or losses, the World Cup is still one of the few events that unites the many cultures and people around the world for weeks under friendly competition and national pride.