What happens when you spend an hour hanging out in an elevator at the country’s largest student media convention? The annual STN Convention provides thousands of students the opportunity to explore their creativity and passion for media. Each student has a chance to exert their artistic mind and utilize their natural tools for leadership for […]

What happens when you spend an hour hanging out in an elevator at the country’s largest student media convention? 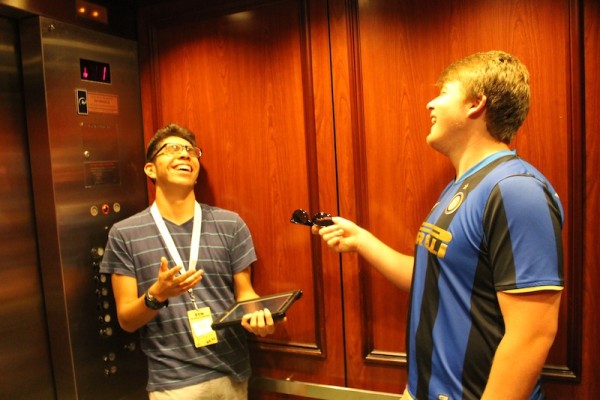 The annual STN Convention provides thousands of students the opportunity to explore their creativity and passion for media. Each student has a chance to exert their artistic mind and utilize their natural tools for leadership for a large audience of their peers.

The competition is rich and no participant is above the adrenaline rush that comes along for the ride. In an attempt to jump in and capture the raw creativity, intensity, and emotion of the STN convention, I stepped into elevator #6 of the Rosen Plaza hotel for one hour at the start of the Sweet 16 Competition.

Upon entering the elevator, I quickly recognized the need to create an environment of understanding and overall “chill”. Also, I had to be able to do it in under 30 seconds, because I was in an elevator, and believe it or not, elevators are not predictable machines.

If I introduced myself and asked for names every time someone walked into the elevator, by the time I would ask my questions, my interviewee would be walking out the door.

Thus, immediately upon their entrance into my domain, I would ask my one question. By the time they were done answering my question, the silver slabs of silence would again leave me in solitude, forcing most of my interviews to remain anonymous.

Nevertheless, in my hour-long journey of ups and downs, I discovered four distinct types of STN patrons, and I asked them all the same question: How do you feel about the STN Experience?

It was 8 AM. Most teenagers can barely make it to class by that time, and so the overwhelming number of tired teens was no shock. Not to mention many of the students at the convention flew in the night before, dealt with time changes, and had to wake up ready to work at 6:30 AM.

Among the comments of these weary morning soldiers included:

“Caffeine always helps. I can’t really think until I have caffeine.”

The fiery drive to succeed at STN introduces some people to an uncharted magnitude of excitement, but it introduces others to an unprecedented level of stress and anxiety.

That’s not to say the stressed students aren’t having any fun. In fact, they tend to be the people who love it most, and it’s their deep rooted love of the art driving them to work their very hardest.

Note: these are the kids stressing out at 8 in the morning. It’s not as if it’s 10:30 at night and their videos still aren’t done rendering.

Though it was early in the morning, some people already had enough work to kick their nerves to the next level:

“I think that any student who pushes all the buttons on the elevator and then gets out should be taken up to the top of the Rosen and thrown off.”

“I’m a little stressed, I’ll be honest. I thought we were gonna start filming by now, but we didn’t get started.”

“I just wish everybody good luck. It was really a curve ball for them to give us a prompt instead of 16 words to choose from.”

“I love being stressed out. The rush.”

I was in the elevator from 8:10 AM to 9:10 AM, and I suppose the life sustaining powers of STN gave these people the strength to overcome fatigue, because after waking up at 5:45 the morning after a 9 hour flight, I would not respond to my question with “Great!”

But other people did.

“I think the elevators this year are much better than last year.”

“Whenever you get a good idea you just get really excited. There’s nothing like the atmosphere of STN.”

“I’m just happy to be here”

“I’m actually feeling great. This is my first STN.”

“It’s the greatest. I wait all year for this trip.”

“I love the atmosphere.”

The President of STN

Probably the most distinct STN patron, the President of the convention snuck up on me and my humble abode in Elevator #6. The tiny Skybridge elevator could barely hold the might of Doug Green, who in his sixth year as president, is largely responsible for the colossal growth of the convention in recent years.

When Mr. Green notified me that he was the president of the convention, I quickly told him about how insignificant I suddenly felt. We stepped out of the elevator for a brief moment and he let me interview him.

“The convention has quadrupled since I started [working as President]” said the master of ceremonies.”

In the hall outside the elevator, Mr. Green was very excited to talk about the convention, clearly proud of the large success that is STN.

“You’re talking about 2,000 students who share the same passion for film under one massive roof, so it’s incredible” says the chieftain of student media.

As I left the elevator at 9:10 AM, I couldn’t help but feel the excitement and respect between each individual that stepped into this vertical people mobile. Every person was entirely willing to share a little bit of their experience and laugh with me in my little vessel of joy.

And though I’ve explained it in my own way, I don’t think anyone put it better than the president of STN himself.

“We believe in changing it up, and keeping it real.”