A New Day In Sports

The first steps of major change in mens’ sports culture brings out the supportive response of the CB community (Photo courtesy of WikiCommons) Within the past year, the world of sports has been greatly affected by the tremors of three huge announcements previously unheard of. In February of 2013, Robbie Rogers of the Los Angeles […] 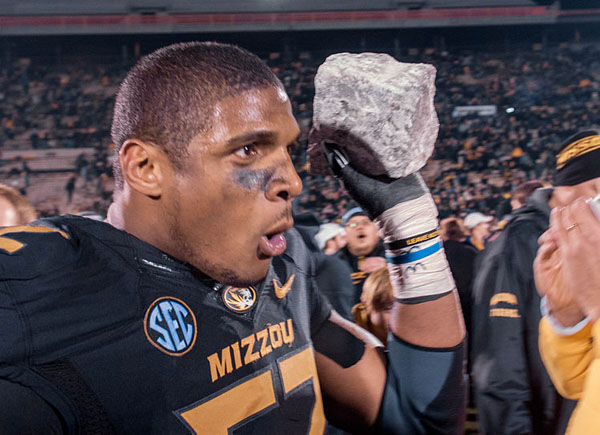 Within the past year, the world of sports has been greatly affected by the tremors of three huge announcements previously unheard of. In February of 2013, Robbie Rogers of the Los Angeles Galaxy came out and stated that he is gay. This announcement made Rogers the first openly gay male athlete to play a major American sport.

On April 29th, 2013, Jason Collins announced in a self-written letter in Sports Illustrated that he is gay. On May 6th, 2013 he graced the cover of Sorts Illustrated with his letter as the lead story. Collins’ brave announcement made him the first openly gay NBA player.

Most recently, college prospect for the NFL Draft and SEC Defensive Player of the Year, Michael Sam, made public his homosexuality on February 9. If drafted or signed by an NFL team, Sam would become the first openly gay NFL player in history.

Athlete Hunter Hershey (’15) was surprised and excited for the coming out of these athletes. He thinks it will lead to all players being more comfortable on the field.

“It’s a big step in sports history — it will make the four major sports more diverse,” said the star athlete.

Fellow athlete Kellen Ralph (’15) is proud of Michael Sam, Robbie Rogers, and Jason Collins as he believes, “they are leading the way and helping others to feel more comfortable.”

Kellen thinks the powerful announcements of the three athletes will change sports as well as encourage others to come out and “help them in their shaping of the game.”

“I don’t think that anyone should live ‘in hiding’ of who they truly are based on society’s perception,” he says.

Like Kellen, Adam is proud of Collins, Rogers, and Sam for their big announcements. He believes now is the perfect time for male athletes to come out even though female athletes have come out long ago.

“Simply because male athletes that play major sports like basketball and football are historically thought of as ‘mens men’ — gladiators if you will — anything that would demasculine a man of such high celebrity in the public eye has always been frowned upon,” Coach Casares says.

“Now that times have changed and society has grown, it’s time to make these changes,” he added.

These gentlemen have shaken the world of sports and introduced a new, more diverse culture to an industry deprived of it. Thanks to the courage of three athletes, sports as we know it has changed the game for all. The way it should be.