Big Arms. Big Bats. Big Goals. Spring is a season that offers new beginnings and opportunities and a new start for the Christian Brothers Varsity Baseball team, who have been gearing up and working hard striving for a successful season. In past seasons, the team has always gone against tougher teams in preseason to prepare […] 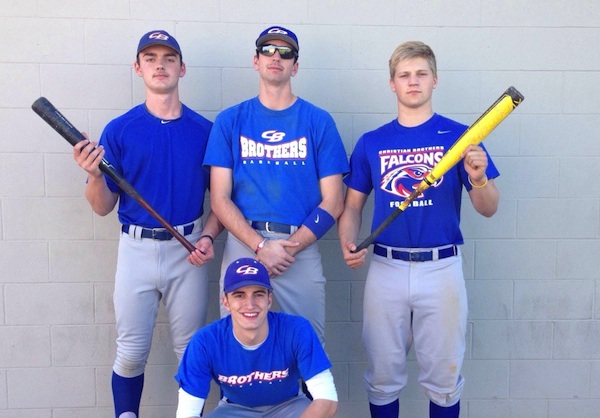 Spring is a season that offers new beginnings and opportunities and a new start for the Christian Brothers Varsity Baseball team, who have been gearing up and working hard striving for a successful season.

In past seasons, the team has always gone against tougher teams in preseason to prepare for league because of their advanced division. Their league record of the 2012-2013 school year, according to MaxPreps, was 8-7.

This year, especially, the team is working towards taking the section championship on May 26th, 2014. They created a list certain goals and hung them up in their home dugout as a constant reminder of winning sections.

The boys have participated in pre-season conditioning and many have put in extra hours to earn their spot on this year’s team, including weight training, cardio workouts, and some time out on the field.

Coaches Rich Henning and Paul Carmazzi have been putting in their time in as well in order to work towards reaching goals for the upcoming season.

Colton Wackman (’15), a catcher on the team, believes a tough pre-season will provide major preparation for games later in the season.

“I predict that in pre-season we will play a lot of the top teams in the country.” he says. “It will allow us to gauge our performance and get ready for league.”

The team is full of strong support from different classes, especially many returning players from the senior class.

Kevin Stenvick (’15) and Jimmy McCauley (’15) both think the seniors will be a major component of this year’s team.

“We have tons of returning talent such as the ‘mustache’ brothers Brendan Gormley (’14) and Steven Talbert (’14) along with sophomore sensation Joe MacNamara (’16) and our juniors,” Kevin says. “It should be a really fun and exciting year for Brothers baseball!”

Jimmy also agrees the team will succeed in this year’s upcoming season as long as they work together. He believes with the strong pitching staff on this year’s team and many returning varsity players with past experience, they will prosper.

Although the boys are placed in a rough division, we hope they can work their hardest to have an enjoyable and successful season and work their way to sections. They boys will have many pre-season home games this year. Make sure to come out and support. CB wishes the guys good luck!