The Delta Tunnels — good or bad? CB staff and students discuss. (photo courtesy of WorldIslandInfo.com) The Delta Tunnels are a proposed project that has become one of the most polarizing issues affecting our state today. The tunnels would be built in the Sacramento River Delta and would be used to divert water to Central […] 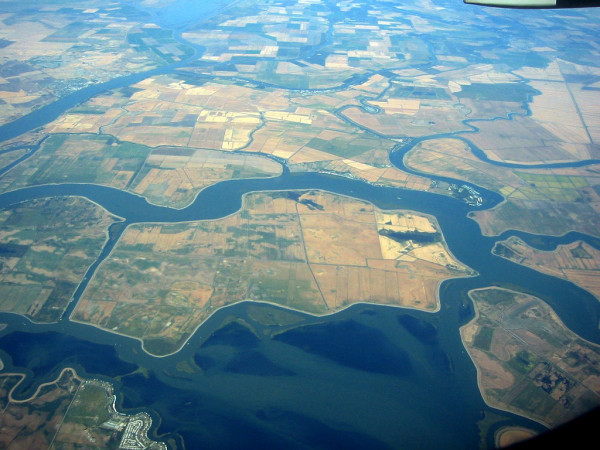 The Delta Tunnels are a proposed project that has become one of the most polarizing issues affecting our state today. The tunnels would be built in the Sacramento River Delta and would be used to divert water to Central and Southern California, regions that have been hard-hit by recent droughts.

As the project continues to be debated in the State legislature and in communities around the region, the Talon wanted to ask the students and staff at CB for their throughts on the subject.

“I think the tunnels are bad for the environment,” says Clarksburg resident Marcus Sheedy (‘16). “They are taking away from the water supply that helps maintain the delta’s ecosystem.”

As Marcus said, a concern many people have about the project is that it will harm the Delta’s environment. Many people believe it will that the decrease in natural water flow through the Delta and into the ocean will devastate the environment along the way.

The construction and existence of the tunnels will have tremendous effects on the delta, as Mr. Danny Delgado ’79, CB’s Watershed Biology teacher, explained to the Talon:

“The tunnels, while I fully understand the need to get water to the south state, are a misdirected effort by specific interests to get northern water to the south,” he says. “But, it isn’t just the environmentalists who are concerned with the water grab that is veiled in this tunnel issue.”

The tunnels are not simply a problem for the environment of the North, but also for the South. Cities like Los Angeles are in need of water to accommodate its rapidly growing population, causing issues down South

“We continue to build housing despite the fact that we are, as a state, over-committing our water already. Why?” questions Mr. Delgado. “Southern California interests have taken all of the water from the Colorado River, San Joaquin River and Owens Valley since the 1930s.”

So beyond the lives of plants and animals, the tunnels affect many people in both regions. Southern Californians may have to pack up and move elsewhere if the price of living gets higher in the South because of water shortage and a loss of population impacts both sides due to the loss of tax revenue.

Tax revenue will not be the only economic impact, farms in the “breadbasket of the nation” will also be hurt, as they may not be the small family farms they once were.

“Most of the farms demanding water are Southern California water interests,” Mr. Delgado says. “Check it out and you’ll find that many of these interests are in fact monopolies or conglomerates with tentacles reaching the Midwest and Southwest”

There is obviously a lot of controversy over this issue and as Northern Californians we generally get opinions and information that are anti-tunnels. But there are some real problems that this project claims it will fix.

The state water project that occurred in the 1960’s under Governor Pat Brown, father of current governor Jerry Brown, is the water system that we still have in the state today. That system was made for 15 million people and California now has a population of about 38 million.

Though this does go back to the idea of Southern California over-committing it is still something that needs to be addressed. Another issue the tunnels would solve is the restoration of the Delta levees.

All the farmland and nature threatened by the construction of the tunnels is also threatened by the possibility of levee failure. If the levees do fail, Sacramento could suffer the same or worse consequences than those suffered when the levees in New Orleans failed in 2005.

The tunnels are a very polarizing and controversial issue that will continue to be debated across the state and will have major effects on Northern, Central, and Southern California, whether the bill passes or not.