Ball is life, even when you’re a freshman. In the wide world of CB sports, often certain varsity teams take the spotlight: football, volleyball, basketball, baseball. Sports like water polo or tennis get minor recognition, but no team has been denied their proper place among the stars like Christian Brother’s very own Freshman Girls Basketball […]

Ball is life, even when you’re a freshman. 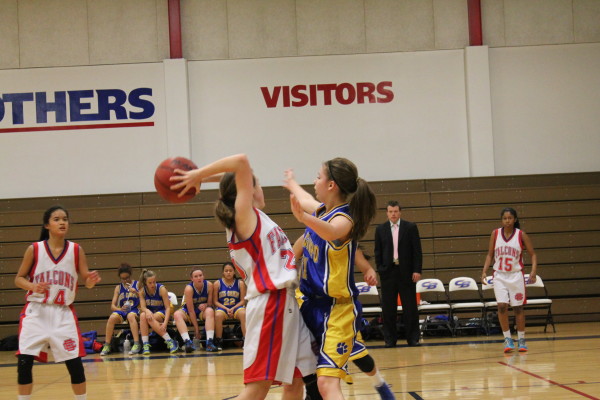 In the wide world of CB sports, often certain varsity teams take the spotlight: football, volleyball, basketball, baseball. Sports like water polo or tennis get minor recognition, but no team has been denied their proper place among the stars like Christian Brother’s very own Freshman Girls Basketball team.

Who are they? How are they doing this season? Why doesn’t the student body care?

To put the team into perspective, Friday afternoon (they play right after school because no one comes to their games l o l) they dominated Casa Roble in a 61-2 wipeout. Whoa! I think even Michael Jordan would be impressed with that level of game. But why doesn’t CB care?

“We’re freshmen. And we’re girls” says Lidia Chacon (’17), who’s practically the Michael Jordan of the team, or so I say.

(Note: The extent of my previous basketball knowledge derives entirely from the 1996 film, Space Jam.)

I interviewed a few of the girls, and they all agreed that the team has grown together. This healthy dynamic seems to have propelled them to mainstream basketball success (as opposed to alternative basketball success), as they had a perfect league record heading into their final home game of the season.

“We do?” says Lidia, of her team’s perfect record, unaware of her teams’ achievement.

On Tuesday, February 11, 2014, the girls played their very last home game of their Freshman career. I went to the game myself, to get the scoop.

When I arrived at the stadium, I could feel the excitement in the air. It was just like when Michael Jordan came back to play for the Chicago Bulls. The girls were no less enthusiastic than I was.

“It kinda just feels like another normal game” says Emily Hosoume  (’17), before the EPIC game began. 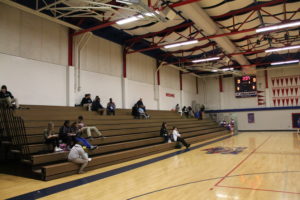 The crowd at Tuesday afternoon’s game

The girls dominated from the moment they stepped onto the court, throwing up points like it was the 1986 NBA Playoffs (But actually, I guess it wasn’t, because Mikey J. scored 63 points alone in a game, and the girls didn’t score 63 points at all).

Our young lady Falcons came out on top though, crushing the Cougars 57-..21? I don’t know. It was a lot. I would say they maintained their perfect record through the season, but the season’s not over and I’m not gonna wait to publish this. It’s Freshman Girls Basketball.

Junior Kristian Heptner (’15) told the Talon his opinion of the Freshman super success.

“You’re denied the access to playoffs after a a perfect season like that? You need to give them the Playoffs.”

Beyond all the excitement and fulfillment of being celebrated Freshman girls basketball players, our young Lady Falcons know what it means to be apart of a real team. They all expressed bittersweet sentiments about leaving their intimate squad to join the junior varsity team next year. But hey, Michael Jordan didn’t play Freshman basketball forever.