Meet the CB senior who single-handedly crafted this year’s Senior Wall. Here at Christian Brothers, the tradition of painting the Senior Wall has been going on for years. An artistic member of the senior class paints a mural, representing their graduating class. This year the mural is being painted by senior Emma Bradford (’14). For […] 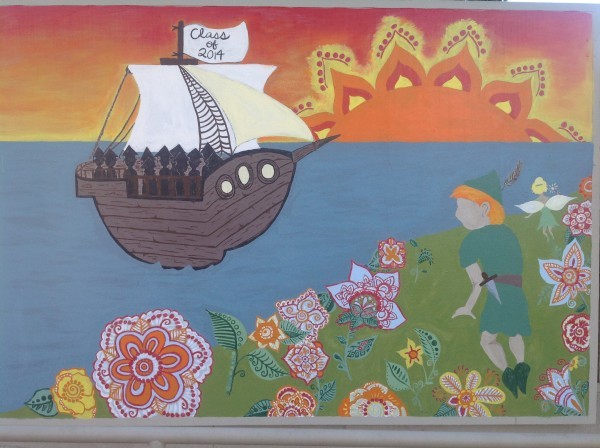 Here at Christian Brothers, the tradition of painting the Senior Wall has been going on for years. An artistic member of the senior class paints a mural, representing their graduating class. This year the mural is being painted by senior Emma Bradford (’14).

For Emma, it was pure chance that she began her involvement with the Senior Wall. A friend of hers, Vincent Salazar (’14), was the one who informed her about a meeting to be held to discuss the wall design.

While in the meeting, Ms. Marian Shackel, the Senior Class Co-Moderator, explained that a competition would be held to determine which artist could create the best design, while incorporating the class color, orange. The artists were given one week to complete their designs.

“I ended up being the only person who submitted a design,” exclaims Emma. “Consequently, my design was chosen”.

With her new position as the artist of the Senior Wall, Emma began to get to work.

“I worked on the wall very sporadically, for varying amounts of time,” says Emma. “Because I was doing it alone, and I had other commitments after school, it took me quite a while spread out over the first few months of the school year”.

It is normal to see a couple of students working together to complete the wall. This year, one couldn’t help but notice that Emma was the only one painting the mural.

“Other artists initially promised to help me paint the mural,” says Emma. “But my lack of communication and planning with my classmates led to me designing and painting the mural alone”.

“Whoops” she comically adds after her statement.

Although she worked alone, it is quite obvious no one can complain after seeing the Peter Pan-inspired mural.

“I love Peter Pan and the concept of Neverland has always intrigued me,” Emma states. “Neverland, in my painting, is a metaphor for high school and adolescence”.

“The class of 2014 is seen sailing away, graduating on a pirate ship into the sunset and into the rest of our lives,” she says.

Emma continues, “This theme is sentimental for me because it really does represent how I feel about graduating from high school”.

Sticking to the rules that the design included the senior class color, Emma finished the painting with an orange sunset.

The wall is now finished and we can continue to admire Emma’s hard work and the beautiful masterpiece she single-handedly created.

The senior class council was also extremely impressed with her work. They were so taken by the mural that they decided to feature it on the back of the 2014 class sweatshirts.

So seniors, make sure you purchase one of these sweatshirts to represent your class and remember your class mural.

“I had a ton of fun working on this mural and I hope it represents my classmates’ feelings and emotions about graduating accurately,” Emma concludes.