A member of CB’s Black Student Union helps draw the community to positive change with fresh food, a bookshelf, and a soup kitchen. Anthony Rutherford (‘14) and his father have been maintaining a garden for the Oak Park community since Martin Luther King Day in 2012. “He and his dad transform vacant lots in Oak […]

A member of CB’s Black Student Union helps draw the community to positive change with fresh food, a bookshelf, and a soup kitchen. 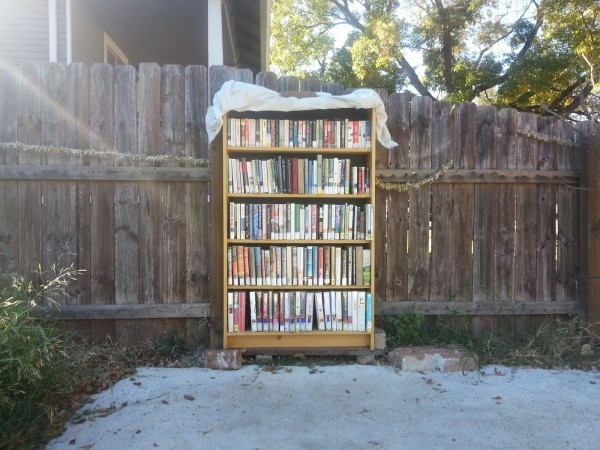 Anthony Rutherford (‘14) and his father have been maintaining a garden for the Oak Park community since Martin Luther King Day in 2012.

“The purpose of the garden is to get the people afflicted with drug use and alcohol on the right path” says Anthony. “If they can go to these open lots and get food out of them instead of drugs, that will build the community up.”

Before Anthony became involved with the garden, the space was being misused.

“I’ll never forget the first time I visited the garden and Mr. Rutherford showed me a pile of dirty syringe needles he had removed from the lot before he tilled the earth” Ms. Wanket remarks.

The Black Student Union made their first trip down to the garden in Octobe. While there, they were able to learn about the use of the garden as well as sample some of the fruits and vegetables.

“There was okra and jalapeño peppers,” says BSU member Akerra Tarver (’14). “I did try one, they were so spicy I felt like my face was going to burn, but they were really good.”

During BSU’s visit, they were surprised to see fellow CB students Ian Oushakoff (’14) and Joseph Krieg (’14) donating their time to work in the garden. According to Anthony, Ian and Joe are regular contributors to the garden, along with Jeffree Clara (’14) and a few community members.

“Any and all CB students are welcome to help out the Rutherfords in their neighborhood improvement efforts,” says Ms. Wanket encouragingly.

Not only does the garden provide a healthy alternative to drug use, but it also has a bookshelf in which the community uses actively. It is held at the entrance of the garden and was placed there by a community member named Pat, who lives close to the garden.

“I thought it was really cool how they leave it open to the public and how they can pick and choose the books they feel” says Akerra.

The bookshelf, which attracts mothers and young children especially. works almost like a library in which members of the community borrow books and return them once they are finished. Some people even donate additional books. The bookshelf system is highly respected amongst the community and there has been no problem with people misusing or forgetting to return the books.

“The community has a standard about how they are treating books and how they appreciate reading” Akerra remarks.

“Someone took that idea in Alabama,” says Anthony referring to the bookshelf.  “They saw it here in Sacramento and took it to Alabama and started duplicating it there”.

As the icing on top of the cake of this beautiful community service, Anthony and his father are planning to use the garden to serve soup during the cold winter nights.

“We are going to have a soup kitchen soon with all the vegetables grown out of the garden,” says Anthony. “Twice a week we will set up soup kitchens at the garden before it gets cold and dark, so people can come get hot soup”.

The soup kitchen, the bookshelf, and the garden itself are three great reasons why one should devote some time helping direct the community towards more positive activities. As BSU plans to be visiting the garden more often, many can join them and make a difference in a beautiful way.

“This is the kind of grass roots activism that I’d love to see our students involved in,” says Ms. Wanket encouragingly.