A Good Day To Wear A Tux

The Talon’s Nicholas Garcia and KBFT’s Daniel Lee embark on a long overdue quest for class, sass, and justice. A couple of weeks ago, the Talon had its regular pitch meeting during A Set. At this meeting, Hunter Hershey (’15), a rising star in the Talon Newsroom, mentioned dress code. He wondered what would happen […]

The Talon’s Nicholas Garcia and KBFT’s Daniel Lee embark on a long overdue quest for class, sass, and justice. 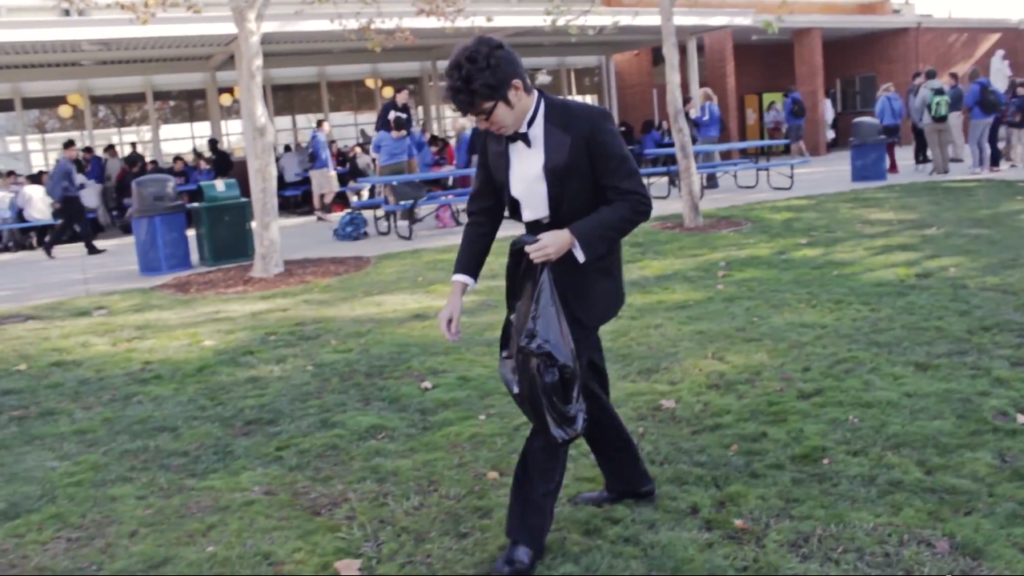 I jumped at the shining opportunity to do something strange.

“What if someone actually wore a tux? I’ll do it!”

Mr. Anderson jumped at the idea, immediately suggesting that we involve KBFT. No legitimate project had ever been attempted with the kind people of Mr. Hogan’s video production classes. Actually…

You may recall a very funny 80s sitcom CB Talon ad? Maybe not.

We both decided we should contact Daniel Lee (’15). Mr. Anderson was a big fan of Daniel’s segment, Special News. Also, we know Daniel to be the Video II student most willing to do other people’s work.

Daniel: I resent that remark.

Daniel really wanted to write a portion of this article, so in all of it’s unedited glory, here’s Daniel’s Segment. It’s really not worth reading. If you skip ahead, you won’t miss anything.

Daniel: “Nick approached me during break, tugging at my arm like an irritating child, pleading, ‘Come with me. Don’t ask why. Just come with me.’ Annoyed as I was, I went along with it. Mr. Anderson and Nick explained the premise of the project, and soon I was aboard the Tux-wagon. I like to think back to this lovely November morning as a momentous occasion in the grand scheme of the school’s media arts program, the conception of a new stroke of greatness: KBFTalon.”

Nick: It was Wednesday. Break was four days away and we wanted Brothers Falcon Talonvision to happen. Too many times had the two programs failed to pull off a successful joint operation. [Editor’s note: Not too many times! Words hurt, Nick… ;-(  ] We knew this was the time. So then and there, we started to consider the necessary components of the piece.

The Tuxedo would be no issue. I used to keep one ready in my car, so I just had to find my Tuxe-Go Pack (Patent Pending).

The real trouble would be organizing a meeting with the Deans. Because of time constraints, I sent a very professional letter to Mrs. Powers under her office door, hoping to get an e-mail confirmation of my suggested meeting time, the beginning of the all school lunch. 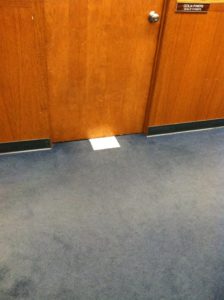 Between a few e-mails, the meeting was scheduled.

Thursday morning came. It was tuxedo time. After B Set, I rushed into KBFT to change. Daria Hoffman (’15) walked into the room I was changing in, and in an attempt to keep anyone from seeing the tuxedo, I proceeded to tell her that I was naked. I was indeed wearing a tuxedo.

I walked out of KBFT and well, you know that story. Wearing a tuxedo doesn’t feel special, in case you were wondering. People who would have previously spat on me walked up and shook my hand. Ryan Hedum (’14) fainted due to infatuation. 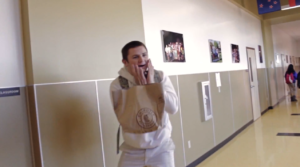 The interview with the deans went well. I tried to cut off all communications with them until the interview began, and they were giggling the whole time. They mentioned that there are times where they need to be serious, but also that part of the job needs to be about having a good laugh. So if you’re ever in a hotspot with the deans, a good yo mama joke never hurt nobody.

Somewhere along the way, someone in KBFT got to calling it a social experiment. I don’t know who came up with this, but I like it. “Social experiment” sounds a lot better than “I just wanted to wear a tux.” [Editor’s note: It was Daniel.]

At the end of the interview, the Deans gave me a dress code violation. A lot of people have asked me if I requested the violation or if the Deans actually felt it right to dress code me. I won’t answer that question. It’s more fun that way. 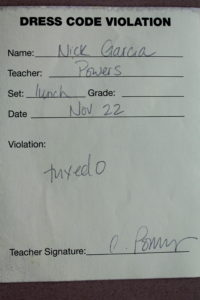 Sometimes it feels good to be hardcore.

As Mr. Levasseur walked away from the interview, he informed me that I only had about seven minutes before my lunch detention would begin, and that if I missed that, I would get an after school detention. I was hungry. Daniel wanted to film me picking up trash and needed something from KBFT. Getting dress coded didn’t seem so romantic anymore.

Daniel: Correction– Nick practically begged me to film him picking up trash. It was not my idea. Also, because of him, I missed my magazine drive pizza. Sweet.

I ran to my B Set to grab my well deserved QSPizza (Go Ms. Moulton’s B Set!), ran to KBFT, grabbed some Canada Dry Ginger Ale and half a tuna sandwich from Isabella Manning (’15). With about two minutes left, I ran to the cafeteria. Imagine curly haired brown kid, wearing a tuxedo, running around school with a ton of food in his hands.

As I walked around with one of the notorious lunch detention trash bags, a lot of great things happened. In fact, most were caught on camera, but due to the existing length of the package, we weren’t able to include some of my favorite moments.

I’ve been begging Daniel to edit all the lunch detention footage together. In fact, if you see him around school, tell him “Hey! Edit that footage for Nick.” Interpret the tone of that however you like.

Daniel: You asked me ONE TIME

I went through the rest of the school day in the tuxedo, and didn’t end up changing out of it until I got home at 4:30 pm. It was a good day.

A few days after I wore the jumpsuit of class, Jonah Levis (’14), President of the GQ Club, invited me to join his popular club. Needless to say, I accepted the invitation. I didn’t know a simple act like wearing a tuxedo to school could help me get into such a prestigious league of gentlemen.

All in all, the experience was fantastic. Life can get boring, and it’s good to have a good bit of fun every once in a while. I don’t believe my wearing of a tuxedo did any harm. In fact, I believe my tuxedo only brought smiles and joy to the students of Christian Brothers.

But seriously, why isn’t a tuxedo dress code?

Check out the KBFTalon partner piece on tuxedos in the classroom.